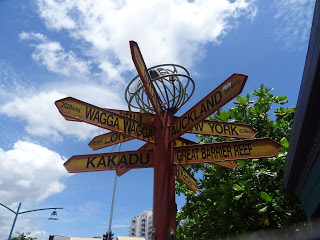 I am exhausted, achey, my hair is a matted mess, my clothes are slightly damp and I am a disorganised mess, but I don’t think I have ever been happier. 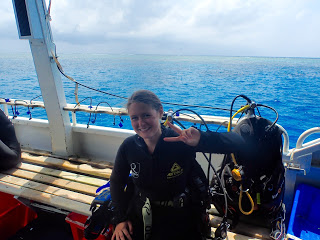 The flight from Sydney was pretty cool, we flew over a thunderstorm and I got to see all the lights of the towns below which as really pretty. The flight landed late that Monday night and I checked into the hostel before pretty much passing out in my room. The next day was a day for just exploring the area, I bought a few souvenirs for the family, chilled out in the lagoon and generally had a bit of R&R time. That evening I met up with Ryan, a fellow housie who would be joining me on our big adventure tomorrow morning – three days on a dive boat in the middle of the Great Barrier Reef. 100% a dream come true. 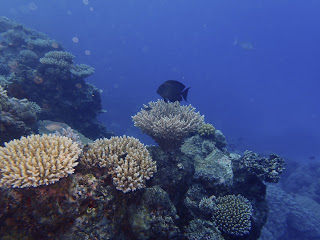 Wednesday morning bright and early I woke up and shoved all my stuff in my bags (Well, kinda. See the next post for more detail about that morning’s drama!) before slipping my key into the postbox in the office and heading outside to await my pickup. After signing in at the dive store and several sleepy hellos it was onto the boat and we were off! And, since it was a shallow boat so as to not destroy the reef, it was very rocky indeed! Several people were ill and I’ll admit I felt a little queasy, but it was okay as long as I stayed outside in the fresh air or I slept. Sunbathing on the deck and watching the rainforest covered mountains get smaller and smaller was pretty lush, I must admit.

After 2 hours we arrived at our first five site and the diving commenced. 3x1hr dives and 1x30min dive on the first two days and then 3x1hr dives on the last day. 11 dives, two nights and amazing food from the onboard cook. It was lovely.I stayed in a bunk bed room with Ryan and we formed a buddy pair for the dives – the bunks were small (duh) and rocked with the sea, but I was so exhausted that I just passed out each night ready for an early morning dive the next day. The rocking was quite relaxing actually.

The crew were all lovely and the other divers were great; a mix of young and not so young, just qualifying and highly qualified! The dive instructors and the briefs for each dive site were hilarious too, with us being told to look out for the turtles ‘Brian’ and ‘Brian’s girlfriend’, the faithful landmark that is the ‘disco train’ (which was just the newly qualified divers on their first night dive waving the torches around), aiming wrasse at the dive leaders and jokes about killer sharks that follow the torch light (a lie!).It was really nice that they gave us kind of free reign over our dives. We were given a rough route, timings to finish the dive by and the bearings and then we were allowed to do the dive how we wanted around those recommendations.

It was a really fun few days full of card games, good food, exchanging travel and dive stories and exploring one of the wonders of the natural world.

And a wonder it was! Over the 11 dives even a ‘bad’ or ‘uneventful’ dive was still fantastic. 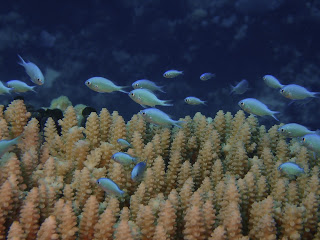 There was so much coral and there were loads of ‘bommies’ to explores, which were underwater pinnacles of coral – which were great for navigation and finding most of the cool stuff.As for the cool stuff we saw reef fish galore (parrot fish, huge bump headed parrot fish, angel fish, box fish, red bass, cleaner wrasse, Khuls anemone fish, actual-nemo clownfish and many more) as well as cuttlefish, rays, sharks and turtles! We even saw Dolphins whilst on the back deck of the boat but unfortunately they didn’t hang around to dive with us! 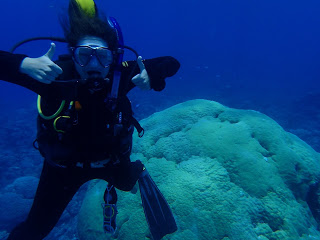 The only things missing off the checklist were diving with a whale or a dolphin (unlikely at best), a manta ray (not quite the season yet), a whale shark (even more unlikely) or eels, so I think the reef did fairly well! I had a fantastic experience with a turtle where he came out of his little cave just as I swam past. He was huge and probably about half a metre away from me as he swam to the surface. The turtle was gorgeous and I was absolutely stoked. 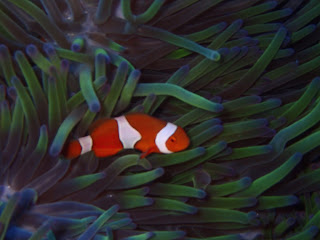 This trip was made even better by my 21st birthday present from my parents. I am pretty cursed when it comes to underwater cameras. Put us together and the camera has a very short life expectancy, so my parents bought me a great little camera (very good reviews) which is waterproof itself, and they also got me a dive housing that makes it waterproof to as deep as I can legally dive, 40m. This is a fantastic set up as the housing should keep it watertight, but if it does leak then the camera itself is waterproof and so it should survive any leakages! Hopefully. Not that I am planning on having it leak!! So far it’s been excellent and I think I have gotten some really good pictures of the reef! 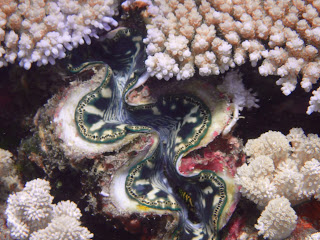 It was an absolutely incredible experience, I’m so happy I went and it was very worth the trip north! I’m definitely going to have to do more dive holidays, although exhausting it’s great to get in a lot of dives and really get into the swing of it so it becomes almost second nature. It definitely didn’t feel like we were there for three days!! This trip alone I got 9hrs of dive time, making me 30 mintues away from having spent almost a full 24hrs underwater since qualifying!! It became natural to just open up the air, slip on the BCD and step off the back of the boat, I can tell I’m really going to miss diving now I’m back on dry land for a while! 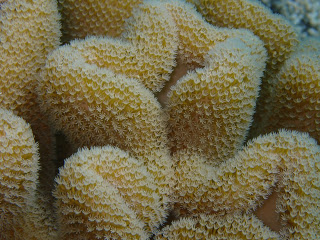 However it didn’t end there as the dive shop had organised a final farewell. The night of our return we all met up at a restaurant in Cairns for a few drinks and a meal to say farewell. I think everyone turned up, at least for a little bit before most of us fell prey to exhaustion and drifted off throughout the night leaving a few hardcore survivors (mostly the crew/dive instructors) to head for the club! I don’t know how they had the energy! Haha
Long and short of this waffle, the trip was amazing, get yourself out to the reef if you can, it’s very worth it and I had a great time!

For a more detailed and gushy account of the dives themselves check out the post on my diving blog here.