Well that was interesting 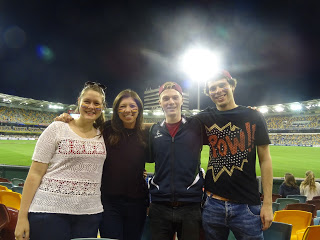 Myself, Lilia, Freddie and Tom in Lions colours (ish)

So first things first, I went to my first AFL (Australian Football League) game on Friday! In fact it was my first live sports game and first time in a stadium to watch sports. I don’t think my parents could quite believe I’d decided to go! It was the Brisbane Lions Vs the Carlton Blues and, once I worked out the rules, it was really great fun. The atmosphere was fantastic and being with a group of people who only kind-of understood the rules made it very entertaining. The Brisbane Lions won with almost double the score, which was brilliant, as they were the team we were supporting. But, as soon as the final goal was scored Elise, a fellow housie, and I pegged it for the last ferry back to campus so we could eat our dinner and go to bed! It was a late night and I was shattered but it was totally worth it!

Tuesday was, interesting, as I managed to land myself in the sick-bay of the campus health-clinic where I got my first ever medical note explaining why I needed to my miss practical. However, after a day of sleep, I am back on my feet, and ready to catch up on what I missed! 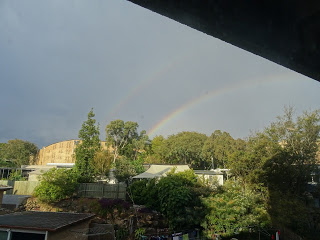 My first double rainbow! It was pretty cool!

My UK bank card got frozen! I mean it’s good that my bank were keeping track of potentially fraudulent transactions, but it was me! Which sucks a little bit, but there’s another card on it’s way. Until that arrives I’ll have to depend upon the bank of Mum and Dad if anything urgent crops up! It is quite a relief though that it is so easy to transfer money between accounts whilst abroad though otherwise I’d be in trouble!

On a different note, it’s crazy how fast I’ve adapted to Australia. I mean, I’m still a little (a lot) wary of everything that could be a snake or a spider, and the city makes me feel more and more like a country bumpkin every time I go, but the weather is bliss! Anything under 20 degrees is now ‘cold’, and this is Winter! It’s mental! I’m loving it though, most days there are gorgeous clear blue skies and if it does rain it’s usually over pretty quick. I guess this weather could get old if you live here for years, but I’m loving it. When the sun’s out, I’m happy! 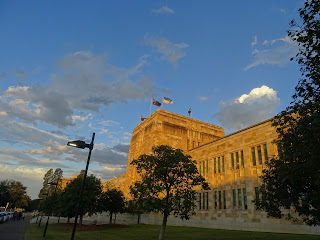 Work wise things are getting crazy busy. I’ve been in Australia for 5 weeks now, four weeks of Uni and they have decided that now is a nice time to have the first wave of deadlines. I think I’m doing okay? I’m behind on lecture notes, but once these assessments are out of the way that gives me a few days to catch up before the next set of assessments start. This coming month I have a big conservation report due in, a research proposal for marine vertebrates, a mid semester exam (wait, what? Time to start revising!) and a report from my up-coming field trip all due in. No rest for the wicked! I know I am on a ‘study abroad’, but for some reason in my head I imagined the workload would be less… whoops!

So, my plans for next week? Field trips, Diving, Assignments and exploring more of Aus! It should be a good week! Oh and, you know, doing the above mentioned work…