The Island (Day 1) – Welcome to Stradbroke, the home of thousands of tiny feet 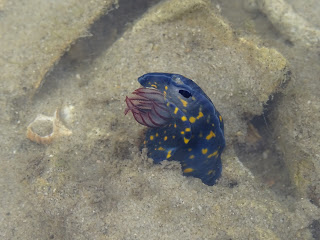 So here we go! Day one of my first marine themed field-trip. Can anyone tell that I’m a little excited about this?

This morning was difficult as we’d been out on the town the day before, and I had quite a lot of things left to pack and the bus was leaving at 8:15. However, I heaved myself out of bed and made it (actually a little early) and I’m pleased to say that lack of sleep did not hinder me in any way all day! Sheer enthusiasm carried me through until about 10pm where I basically passed out in the bed!

Moving back to the actual field trip itself, we all piled into a coach and then got the ferry across from Cleveland to North Stradbroke Island, before heading to the the Research Station which would be our home for the next few days. It was pretty nice actually, there were bunkbed rooms in an L shape and in the centre there was the dining hall, presentation room and the lab. Even better, the beach was just across the road, not even five minutes away. 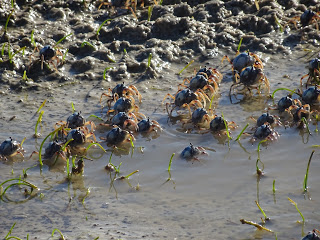 Crabs on the move

Once we’d had morning tea (that’s the most British thing I’ve ever heard in my life!) we split into our project groups and headed out onto the sand flats to see what we could spot. A lot is the answer! There were green worms, peanut worms, soldier crabs, sponges, corals and hermit crabs everywhere. There were also shrimp and small fish (gobies? I think?) and loads of ray pits from where the stingrays had burrowed into the sand to get at their prey. I also found a nudibranch which I was really excited by! I took a photo of it just incase I couldn’t find it again when I went to go ask the tutor what it was, and, lo-and-behold, we could not find it again when I went back. However one of the PhD students (Who funnily enough was from the Cornwall campus like me) specialised in nudibranchs and she ID’d it for me.

After an amazing lunch it was off to the rockier beach to see what we could find and this was just mind blowing. Yes, we saw a mantis shrimp and sea-cumbers on top of a lot of the things we had already seen in the sandy shore, but the amazing thing was the army of solider crabs. Thousands upon thousands of them just swarming over the beach. I felt like I’d fallen into a David Attenborough documentary, it was incredible to see! 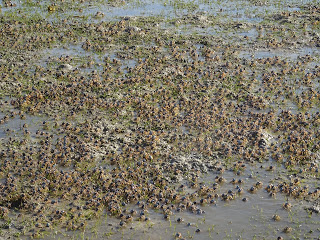 We also had to start planning our projects, since we had to do some work, it being a trip for a module and all. Fortunately all of our group were Biology students so we planned the project quite quickly and worked out how to do it so we had the rest of the evening free.

After dinner a few of us went out to the beach where I witnessed one of the most gorgeous sunsets I have seen in my life. My photos do not do it justice at all. The sun was setting behind another island and the water and sky were just these gorgeous oranges and it was stunning. The still water and the clear sky just made for something quite special and I just felt like I was on a tropical island on a holiday.

The evening was one of the weirder experiences I’ve had in my life so far, we’d been told that wild koalas liked to hang out around the eucalypts in the graveyard, so we donned head torches and set off to wander the graveyard in the pitch dark. It was very surreal. A few people were quite creeped out by it all, but we left the graveyard once we established that the koalas were better at hiding then we were at seeking. So we watched the stars for a little bit before heading back to base for a much needed sleep.

Sunset at the beach