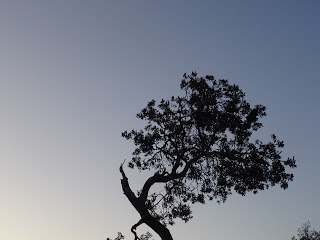 So today had us waking up early, 5am in fact in order to go do a bird survey. The night before had been pretty windy so the tutors reckoned that a lot of the insects had been blown away, leaving us with less birds than they had anticipated. It was still nice though, I learnt about some more Australian wildlife and I didn’t actually feel too grotty after an early morning.

Then it was Into the back of the 4x4s and off along the beach, which is apparently a main road! We were thrown around a bit but it was so much fun, I really want to try driving on a beach now!

Since we were in group two we drew the short straw and got to do the fun activities in the morning and work in the afternoon. 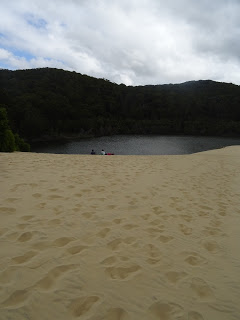 This meant we were directed up this giant sand dune where we’d go swimming in a ‘perched’ lake. The walk itself was nice, going through eucalyptus woodland and what not, but the top was just spectacular. It was a sand blow, a huge expanse of dune that just stretched on and on! I felt like I should have been in a dystopian post-apocalyptic movie or something, very mad max!

At the base of this dune was lake wabby, so naturally we all went for a swim. I don’t think I’ve ever swum in a lake before, it was really nice!! A bit odd to have deep green water and twigs on the floor though. There were also some rather large fish but we didn’t see them until we got out otherwise I would have been a bit more hesitant about throwing myself in the water. Actually, I might not have, it was very very hot after the walk up to the lake, so I would have probably gone swimming regardless! And I do mean up, the views from the topic the sand blow was incredible!

After an amazing lunch back at base it was time for us to hit the beach and do some work. Today’s task was a dune transect, IDing and measuring the main plants in a transect every 20m. It was quite fun as we had no idea what the plants were and the route was fairly tricky, but our intrepid explorers, Tom and Freddie, did a fairly good job at finding a decently straight line for the transect through the undergrowth!

Having worked in the sun all afternoon the team all went for a swim in the watering hole near camp. It was very cold, with a teeny tiny warm layer at the top, and there was the fear of dingoes running of with our stuff but we still had a great (although brief) swim before showering to actually get clean as I’m sure a pond isn’t good enough! 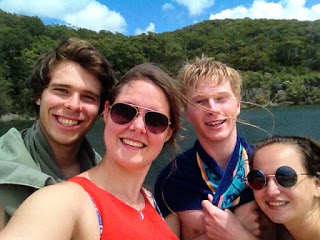 We then had some talks from the tutors about their life story, what they did and why they were with us. It was really inspiring hearing some of the things they’d done, it just made me want to go off and find the next great adventure! 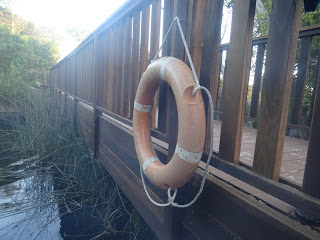