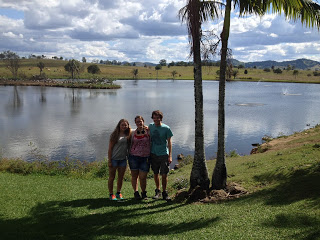 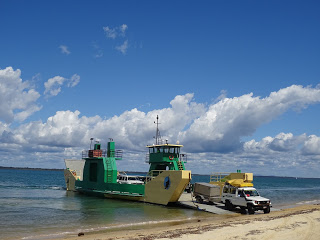 So after a brief chat with the parents, an hour and a half chatting to Katie and a quick swim it was onto the bus with my big rucksack to venture northwards to Fraser Island.

At first I was reading, but I soon gave up on that in favour of watching the world go by. The scenery was so different from what I’m used to, it’s my first time properly getting out of the Brisbane area on a long trip and it is beautiful. Large plantations, forests of bright green and then silvery dark green trees, huge open areas, dramatic looking mountains and a few lakes/billabongs here and there.

The coach journey took about 4 hours with a 45min stop for lunch at the Matilda service station. We were then dropped off near a beach where we traipsed across the beautiful white sand to where the barge would meet us. Oddly enough the beach was a ‘main road’ with four wheel drives going up and down either side of our slightly bemused huddle of students. When the barge arrived the walkway dropped and we had to time the boarding with the waves so our shoes didn’t get wet. Very amusing to see. 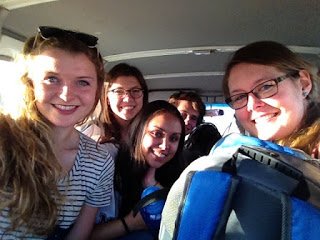 After boarding the barge and being taxied across the water we’d made it to Fraser Island! Cue the fanfare of trumpets.

Our luggage was chucked in a truck with a tarpaulin (concern 1) and then we were told to make sure we buckled up (concern 2) and asked if anyone felt ill (concern 3). Basically the drive to the village we’d be staying at was to be a bumpy 4 wheel drive at a decent speed so we didn’t get stuck in the sand. We also had to avoid the incoming tides, potholes and the odd dingo. It was actually really fun, extremely bumpy and crazy but it was exhilarating and there was something completely Aussie and free about it, just hurtling down the beach in the back of a 4WD! We did see a white bellied sea eagle and dolphins (possibly humpback dolphins) en-route though! A grand welcoming committee to the island!

Once at the village we partnered up (hi Emily) in our bunk rooms and went for possibly the least reassuring briefing ever – there are funnel webs and huntsmen, dingoes and leeches, ticks and scorpions, death adders and taipans… The list goes on! All the really dangerous stuff is congregated on this island! Typical! It did make me rather grateful to not be camping though!!

Dinner was spectacular and then it was a trivia quiz, which we came second in by 1 point, which we were happy with as we got chocolate out of it!

Just before bed one of the boys on the trip found a Huntsman spider which sufficiently freaked everyone out as it was fast! 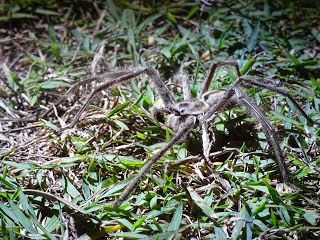 Then it was bed ready for a 5:30 start. Joy of joys! The things I do for science…