The Adventure Starts in Earnest 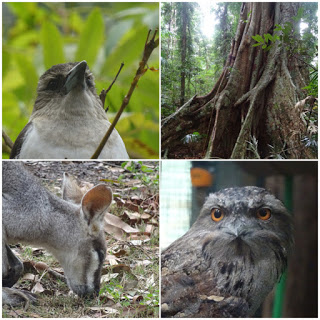 Life is now kicking it up into the next gear as all the interesting things are starting to happen! I’ve worked out that I now only have three free weekends until the end of the semester and they are focused around the deadline weeks, so I won’t be doing anything in those!

I had my first field trip with UQ this week, we went to the Brisbane Forest Park for my ‘Australia’s Terrestial Environment’ course. The first stop was Mount Nebo, where we went for a walk around the forest, looking at the different species and features that are found in rainforests and sclerophyll forests (Acacia and Eucalypt forests).

I know rainforests are meant to be wet, but we happened to choose the one day when Australia decided to rain, so we all got very soggy and our work sheets were falling to pieces! After a quick lunch we went back down the road to Walkabout Creek, where we looked at the Australian animals they had on display (Platypus, Tawny frogmouths, Wombats, Roos, Wallabies, Quolls etc) and had a quick chat about them all.

I think everyone liked this stop best as it was inside, so we were hidden from the rain, and there was nothing on the worksheet to do here, so it was more of a ‘for-the-sake-of-interest’ trip. 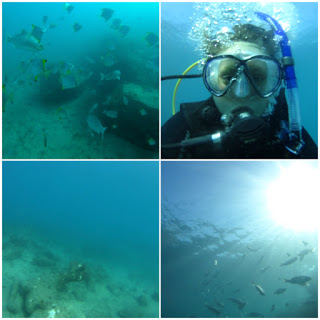 Lastly we went to Jolly’s Lookout where there was supposed to be a fantastic view over the lowlands, but for all we knew that could have been a drop off the end of the world, there was just a thick bank of cloud in the way! Here we had dampers and tea in true Aussie style and then had a quick talk about the rocks in the area, how they formed and what that meant for the surrounding plant life. It was quite interesting, but I think I’ll stick to whole-organism biology, that’s more my cup-of-tea!

I also did my first Australian dive this week, down at the Tweed River, right on the boundary between New South Wales and Queensland. It was my first time using my new gear, and I was underweighted, but it was still great fun. There were a lot of stone fish and what I now know to be ‘Diamondfish’. There were also a set of submerged scales and an old deer statue, which was pretty weird, but overall it was a nice dive to get used to the kit and I can’t wait to get back into the water! (If you want to read more about this check out my other blog)

This week a lot of my time has been dedicated to our group project for my conservation module. We had to do a radio interview that covered a current conservation issue, so we decided to look at the conservation of lions in Africa. It was quite fun to do, but it’s hard to get all the required information into such a short time frame. It ended in hysteria though as we were so tired and had been working on it for so long that we were cracking up over the smallest things! 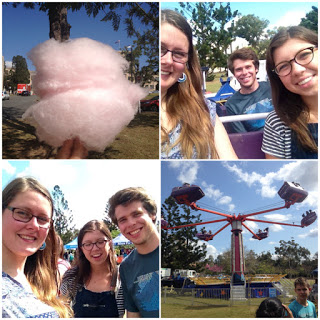 Lastly, UQ had a winter carnival on this week, which was great fun! Everything was free and they had fair-ground rides, free food, stands where you could win prizes and all sorts, just on the grassy slopes near the campus lakes. It was totally crazy, I can’t imagine UK uni’s doing something like this, but it was great fun to run down there and fit in what we could between lectures!

Aside from that it has been business as usual! I have handed in the first wave of assignments and I have just started to pack for my weekend away to Stradbroke Island this weekend. It does mean I’ll be missing the IH 50th Anniversary ball, which is a real shame as it would have been nice to go, but I think anyone who knows me would agree that I’d probably prefer to be wandering around rock-pools and doing nerdy-sciencey-outdoorsy stuff than going to a posh ball.

Once again, since I’ll be going on a multiple day field trip I will try to do a post each day, as otherwise there will simply be too much to say! I can’t wait!