So Close, and yet so far 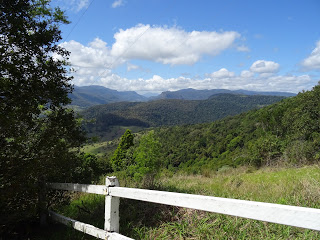 So Lamington was gorgeous

So the end draws ever nearer, I only have a week left of term! My first semester is nearly done! How scary is that? It’s gone so fast.

So this week I finally got to go to Lamington National Park, which is about an hour and a half south of Brisbane. It was a trip with one of the courses, but that possibly made it even better as we had the the tutors/gurus with us who knew everything and anything. It was a really good day, we split up into groups depending on what we wanted to see and the length of the walk we wanted to do. We went for the second longest walk with the caves and waterfall, which were pretty cool! We also saw a carpet python curled up just off the path digesting its last meal! The walk was beautiful, and not too hard, but it was about 4km longer than we signed up for as we did a bit of a detour, but we still weren’t the last group back and that’s what counts! One of the girls also got a leech on her ankle, which was pretty gross, but he tutors sorted that out and any ticks we may have picked up so everything was hunky dory. 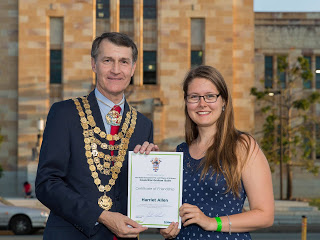 Me and Mr Mayor

This week I have been holed up in F-Common with a few other hard workers, trying to get my assignments finished, it’s been rough but they are now handed in and that’s all that matters… Now I just need to start revising as we only have a week off to revise! ARGH! However it wasn’t all just working away in some dark corner of college, we kept popping down to shop (which is a snack store in college every night) to re-fuel and we even joined in with shop call one night, which basically consisted of standing on G-lawn bellowing ‘Shoooooooop, ooooooooo, peeeeeeen’ which was all good fun!

I also had the UQ/Brisbane international friendship ceremony this week, which was pretty swish. It was pretty much an event where the Mayor gave out certificates and had a photo with the exchange/international students and there was food and so on, it was a pretty nice break from work.

This week also saw the finalisation in some of the travel plans for when my parents come to visit, and I have to say, this trip looks LUSH! I am properly looking forwards to seeing them again! It’s been ages!