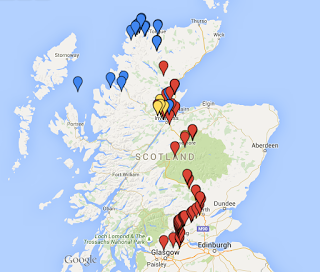 A map of our travels around Scotland.

Admittedly this is the crow data, but same difference!
Today was the last day of the Scotland Field course, and so the last time I’d see my university friends before heading off to Australia for the year!

Since we were in Nethy Bridge and the start and end point of the trip was Glasgow we piled into the mini vans to drive down south once more. However, the Scottish fates were in our favour and as we were leaving we saw an osprey fly overhead and then stopped at a reserve where we saw an osprey in its nest and a golden-eye duck with ducklings. That left us with only the eagles having been elusive (and I didn’t see any of the red squirrels but we’re not even going to go there!) so all in all I think the field-trip ticked all the boxes!

Once we reached the halfway point the minibuses were re-jigged so that we were split into airport goers and those who wanted the centre of Glasgow for the train and bus stations. After waving goodbye we then headed off for the last hour to Glasgow, where Catherine, Frances, Sophie and I headed off to Glasgow station.

We’d managed to arrive four hours early, so after checking with the station guards Sophie, Catherine and I bid Frances goodbye and hopped on the earlier train to London. It was a long journey, the returns always seem longer than the outward journey as there is no longer the building excitement of an upcoming adventure, but it was nicer to have two others with me! 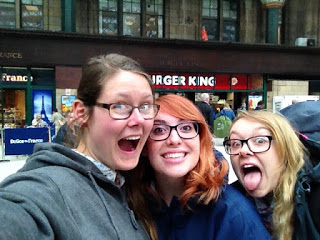 Saying goodbye to these two weirdos!

Once we got to London Euston I had to say goodbye to Catherine and then it was just Sophie and I on the tube. Finally, after leaving Sophie I made it the Charing Cross and headed home.

The train journey from London was…interesting. I had lots of bags, I was tired, my bags were probably quite dirty from a week in Scotland and I was probably exhausted and dishevelled from running around the underground with a huge backpack. What made it even funnier was that I had managed to time it so that I was on the train with the people coming back from Ascot, so they were all in dresses and suits and top hats and I was standing in the corner feeling very out of place indeed! It was very funny.

Finally, at about 8pm I reached home, which was much better than the 1am return I’d have had if I’d waited for our booked train, and had a meal with my parents before pretty much collapsing in my bed.

It was good to be home but it was sad to say goodbye to some of my best friends and to officially say goodbye to Exeter uni for a year. It really does feel like a part of my life has come to an end, although I know I’ll be coming back and I know I’ll be seeing all my friends again (they have no choice, I will hunt them down for at least a hug!) it will be different, but I don’t mind. That’s all part of the adventure.

And so I am no longer a second year student of the University of Exeter! I am now preparing to embark on the next big adventure in my life, next stop: Australia!