We had a lie in! I never thought I’d see the day where 7:30 was a lie in! This morning consisted of totally packing up the room, cleaning up after last nights festivities and then all piling back in the van for the journey back to the Cairngorms hostel. 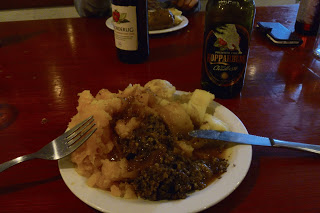 Since we were travelling back south again we’d be moving from the hooded crow region to the carrion crows, so crow spotting was back on, to the best of our tired (and in some cases hungover) capabilities!

With our amazing luck so far at seeing otters, we figured this could be transferred into spotting sea eagles, golden eagles and osprey. But that was not to be the case! Despite stopping off to look over at Gruinard bay/island (where they tested anthrax) we didn’t see any sea eagles, and so we continued our way back to Nethy bridge.

Eventually it was only the four of us in the front of the minibus that were still awake (and the driving lecturer of course) and so we ended up singing along to various different songs, from Muse to Disney as we drove through the moorland which was great fun!

There was a stone cow in the carpark, so a lot of photos were taken!
Once we reached Nethy Bridge we had time for a quick shower before having a talk from an old friend of the lecturers who works on conservation efforts in Scotland and then we had our own Burns-ish night.

The group that had done this trip the other way round from us (Durness then Nethy Bridge) had prepared haggis with neeps and tatties, and in the traditional way there were poems as the haggis was brought out and cut, speeches and toasts dedicated to the funny events that had happened during the course of the trip and there was a lot of table thumping, singing and laughter. It was a fantastic night and the haggis was absolutely delicious!

Since it was our last night the lecturers then turned in and we all gathered together in the basement bar and there was lots of drinking and music and pool and card games before we went to sleep for the final time in Scotland. It was a great night, and it was quite odd to think that it was the last time I’d be partying and having fun with some of these people for quite some time! It was a good way to end it all though I think. It’ll certainly be a lasting memory!