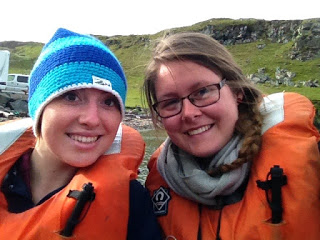 Frances and I looking fabulous in our high-vis life jackets!

After an early start the 25 of us were piled into a small ferry (in two loads) and headed over to Handa Island, a Scottish Wildlife Trust reserve.
It was very idyllic, we pulled into a little bay and some volunteers wheeled a walkway out to us so we could get off the boat before we headed through the sand dunes to the little hut where they would give us some background information on the island and its birds. If not for the temperature I could have almost thought we’d landed on a tropical island!

Once the people from the other minibus had made their way over we all sat down, over looking the terns in the bay below and listened as the volunteers and warden explained what they do. However, halfway through the cry of ‘otter!’ went out and I have never seen bioscience students move so fast! We were all sitting down, a bit tired and out of it and a split second later we were all clustered around the top of the bay watching through binoculars as the terns mobbed an otter who had disturbed them. It was even closer than yesterdays otter! We could see it dive, swim, tail flick and watched as it crossed the bay and clambered around the rocks on the other side. It was fantastic. 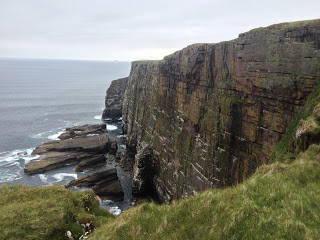 The cliffs were pretty impressive!

Once we’d all settled down again the warden continued with her talk and then we headed off across the island to the stack. En route, since it was a science field trip, we all looked to see how many great skua nesting territories we could find. I think the general consensus from the students was between 15-20 but (if I remember rightly) apparently there are up to 30 breeding pairs!

We then reached the stack where we were to conduct a seabird population census. There were loads of them. The stack was jammed full of guillemots, kittiwakes, razor bills and, perched on the grassy top, puffins!

We stayed there a little while to get our estimates, but the rain was coming across the ocean towards us as we watched, so we high tailed it back across the island, back in the ferries and back to Durness.

That afternoon was spent preparing and then giving presentations for our group projects we’d collected data for on the Sunday (deer vigilance for us). They were all pretty interesting and it was quite nice to sit down and work out what our little projects had found, it was great to all just sit around and have a big group discussion on the sofas, with the Aga in the corner warming the room up! (Ignoring the howling wind and torrential rain of course!) 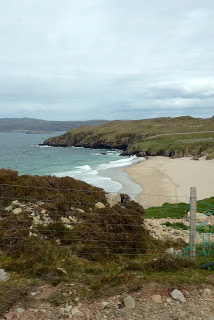 The bay near the hostel. Very Cornwall Esque.

Once we were done the lecturers told us we had nothing urgent to do that evening and that we could do what we wanted (within moderation). Since it was one of the boys birthday we did what students do best: located the nearest pub and headed out into the rain. It was great to be able to let our hair down, but as tiredness sunk in we all headed back to the hostel in dribs and drabs to collapse in bed ready for the journey back to Nethy Bridge the next day.

In fact it was the start of a marathon journey South. Over the next two days I’ll be travelling from the tippy top of Scotland to 30minutes away from the south coast of Kent. That’s quite a way to go!