I thought it was the holidays! 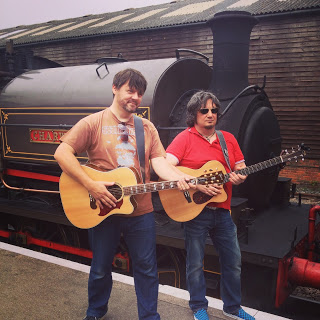 You would have thought that the end of the field course meant that this week was lovely and relaxing. Oh no.

The first three days were a Double 6 big weekend. My Dad’s band played in Edenbridge on the Friday night, at the Kent and East Sussex Steam Railway festival on the Saturday and then Sunday was Father’s day, so we went for a meal out in Tenterden before Double Six played there too!

It was great going out and enjoying the sun, and I even got to catch up with some old family friends, but in the back of my head there was the constant hum that I only had one week to do the three assignments from the Scotland Field course. Term ended nearly two weeks ago! (sulks)

After all the fun and games were over, Monday was when I knuckled down and waded in to my research and data analysis. And boy did it take a long time! It’s amazing how quickly you forget how to science! Particularly R, which is the most useful program ever, but also the most frustrating! And I have to say, our personal project didn’t work out as well as we wanted it to! At least I managed to finish and write something vaguely scientific, hopefully the stats won’t account for too much!

Well, it’s all done and dusted now, my reports are handed in and now I’m free for all of 2.5 weeks! British summer, show me what you’ve got!