Goodbye England (why am I awake?)

This is awfully strange, I’m in Australia! I’ve actually done it! And the weirdest thing is that it hasn’t sunk in properly yet! I still feel like it’s not real, that I’ll be going home in a week or two and carrying on with normal life!

The weekend before I left was hectic but great fun. On the Friday I got a lift with mum as she went to work and then headed into town to catch up and have lunch with Kirsten, who’d been in NZ for a while. Katie came down on Saturday to attend the music festival nearby and my dads gig before saying goodbye – which is not getting any easier. Also, Zoe and Colin popped down for a surprise visit before I left, so I got to see them before leaving too! It was a really great day actually, the sun was shining, I got to see bands that I hadn’t seen before and loads of people showed up!

Sunday morning I packed the last few bits and bobs, triple checking the weight of my bags before Tom showed up so we could give him a lift to the airport the next day. After a lovely last day there was a slightly emotional hug goodnight and then my last sleep in England. 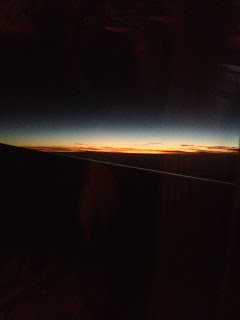 Sunset from the air!

Saying goodbye to my parents was pretty hard, I may have had leaky eyes at a few points but before I knew it I was through baggage check and security and headed for the plane. The journey took so long! I know that 26hours of travelling is never going to be a picnic, but it was duller than I expected, turns out theres only so many movies you can watch before getting bored and sleeping was pretty difficult. At least I had Emily and Tom to keep me company, without them I’m fairly sure I would have been bored brainless!

Early Wednesday morning (Aus time, 4pm in the UK) we landed in Brisbane and I was collected and taken to my accomodation while Emily and Tom stayed in the airport as they had to sign their lease in the morning once the office had opened. I am now settled in my accommodation, I basically know my way round campus and I think I’m basically sorted. Victory is mine!

However, it is the coldest winter Aus has had for over a decade (apparently) and I have to say it is fairly chilly. Not in relation to UK winters, but I was expecting 15-20 degrees, which I guess it is during the days but at night it drops quite suddenly! The wind is fairly cold too!Also, probably due to jet lag, I keep waking up at around 3am. Hence the title of this post!

Campus is rather pretty!

Despite the chill it’s been great, the fauna has been keeping me amused: Possums, ibis, bush turkeys and (I think?) a rainbow lorikeet! No snakes or spiders yet which is a relief. Introduce them slowly! And the campus itself is gorgeous, I think I’ll enjoy it here!

Now just to get diving, start classes and do some sight seeing! Brisbane, show me what you’ve got!