So since it is coming to the end of term, there are fewer lectures and such, giving us more free time/time to work on assignments/revision. But so much for slowing down, this week was actually pretty hectic in the end!

As a small distraction Elise and I hit the museums and galleries in the CBD. Unfortunately the lights display in the Gallery of Modern Art which I wanted to see was no longer there, but there were plenty of cool exhibits and the science museum was great too (obviously). I’ve never really been to/enjoyed art exhibitions before but I seem to be finding them a lot more interesting now. I must be growing up! 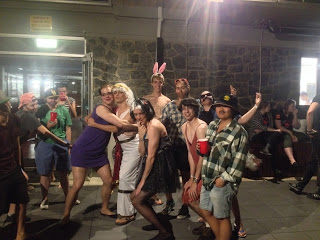 I also had my non-IH group of friends over for Thai take out and a few movies. It was a really great night, very chilled and it was nice to just chat and catch up with each other as we’ve been so busy with assignments and so on lately.

This week I also attempted to organise my first diving trip, since there are no other trips running! I’m hoping that a few of us can go out to Cook Island, just south of Brisbane and get a couple of dives in through another company. I wouldn’t be able to do it without a charter boat though, I’d need to make sure that I had boat handlers and check people got in and out of the water okay and within the correct times and all sorts. Not on my first organisation trip thank you!

This week was also IH’s in-house switch party, which was possibly some of the most fun I’ve had in a night out so far in Australia! The basic concept was that girls went as guys, and guys went as girls. For girls it was pretty easy, we chucked on shorts and baggy t-shirts, drew on some stubble and thicker eyebrows and tied up our hair and we were set. The effort some of the guys went to was hilarious, I’m talking ball gowns, wigs, make up, high heels, tights – the works. It was hilarious doing some of my friends make-up, this party was hilarious before we’d even turned up. It was then good fun all though the night as we all got quite into character and teaching each other how to walk/talk/sit/stand like the opposite sex. There was lots of ‘No! Stand up straighter! Don’t just dangle your arms! Look more relaxed! Slouch a bit more!’ It was fantastic. But it’s also very hard to unlearn the mannerisms you’ve picked up over the years, some of which I didn’t even realise were a thing! 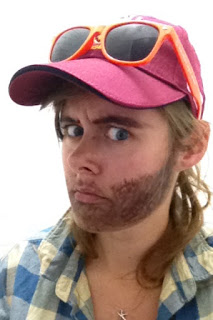 I also took a trip to the near-by reservoir, Enoggera in D’aguilar National Park with Freddie and Tom. We walked one of the tracks and actually saw quite a lot! Not only was the area quite pretty, we saw fairy wrens and turtles too! We also had lunch at walkabout creek before heading home!

I’ve also made more concrete plans for my summer holidays, which are fast approaching (which is terrifying). I’ve booked a three day live-aboard dive trip in Cairns, so on the actual Great Barrier Reef, which was expensive but will hopefully be totally worth it!!!

Lastly I had my final lectures of the semester this week, I have a day trip Friday of this week but after that I am done! I just need to revise and hopefully ace these exams! Fingers crossed!