And so it begins

This week officially marked the start of my ‘study abroad’ program as I had my first lectures! There has been a lot of changes and switching of modules but I think I have it sussed now! Just about. 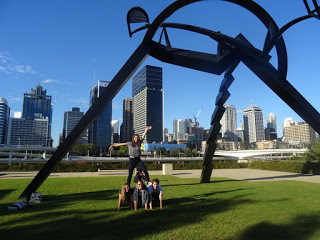 So far the lectures have been pretty interesting. I mean, I’ve only had about two lectures from each and 2 x3hr practicals, but it seems fun! I think I’ll have a lot of work to do though! 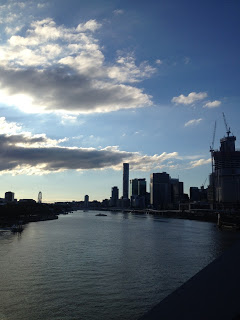 Brisbane as the sun started to set

Since a lot of my courses have field trips this semester (yay!) I’ve had to do ‘sign on’s, and these are possibly one of the most stressful things I have ever had to do! The class is given a time and then everyone logs on and has to choose which trip dates they want/can actually go on and each time it has filled up within 2/3 minutes with me getting some of the last spaces. And I still have more sign on’s to go! So far so good though!

Away from the academics there has been a lot going on!

IH have started their orientation events for this semesters freshers so I’ve done tie dyeing, gone on a cafe crawl, gone to a 60s party, spent an evening playing dodgeball on trampolines and as freshers we’ve had to learn the freshers dance which is great fun. Pretty much if that specific song comes on in a club or bar all of us have to dance it and it’s great fun. At first I felt a little awkward doing it, but it’s such a group thing that it’s just a great laugh.

The international exchange students society (QUEST) have been doing a lot of events too, we’ve gone on a hunt through the city solving riddles and completing challenges such as eating weetabix or veggiemite, faking accents or guessing at charades. We also had to take photos of a lot of different places so it was a really fun day. Exhausting (I think we walked 18km if I remember rightly) but great fun! We also had an ‘Aussie animal’ day where they brought in snakes and wombats and such like for us to have a look at! 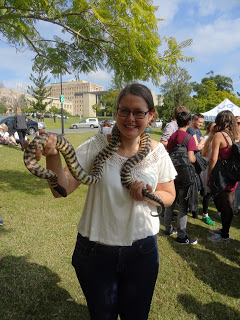 Me and a snake

I also went to the Centre of Marine Sciences talkfest, where scientists gave brief talks about their current research. It was really, really interesting and I definitely want to try and volunteer over the summer, everything I’ve heard about so far sounds incredible!