A tantalising taste of Marine Fieldwork 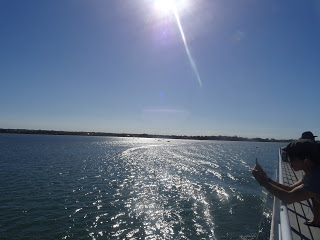 Back to Straddie I go!

This weekend through my Biol3206 (Australia’s Marine Vertebrates) course, I had my first proper insight into legit marine fieldwork (as opposed to teeny tiny itty bitty self-generated projects).

I’m going to keep this post brief as I’m not sure how much detail I am allowed to go into as there’s all sorts of technicalities around my lecturer’s permit regarding the dugongs, but I’ll give you a brief idea of what we did!

The first night was quite cool as we all went out in a big group and cast out a net, bringing in what we could see and having the lecturers identify them for us before releasing it all back into the wild. My favourite was the sabre-toothed guppy as it was so tiny, but had quite the bite! It was really interesting looking at all the fish, and we caught so many just from the shore, I can’t wait until I’m up to the point where I can so easily ID so many fish. 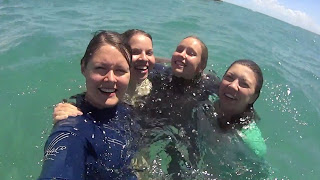 So we jumped off the side of the boat for a quick swim!

The next morning we went out on the boats with another of our lecturers, and this is where the permit technicalities come into play. My lecturer works on dugongs, studying the population in the Moreton Bay area and how the population is structured (i.e. Who gave birth to who, who mated who, who’s moved into the population etc). Pretty much we sat back on two boats and watched while the professional team did their thing, which was pretty awesome. On the down time they explained the method and future analysis behind it all and we even got to see loads of turtles and a group of stingrays, which was a little scary at first as they were all bunched up in one amorphous blob just where we were about to go for a swim! (A/N – apparently a group of stingrays is a ‘fever’).

In the afternoon we had the joys of building a BRUV (Baited Remote Underwater Video), which was pretty much a GoPro stuck to a crate with a few bricks and some bait on a stick. Ours would have worked… if the GoPro did. We tried two cameras and neither would film, so we trudged back to shore and instead learnt how to cast nets. In all honesty, I was pretty shocking, I caught a stick and that was about it. However, in my defence, no one else caught anything either!

All in all it was a great weekend, I met new people, learnt loads of new field skills that would actually be of use to me in the future (hopefully) and a few days on Straddie is never a bad thing!