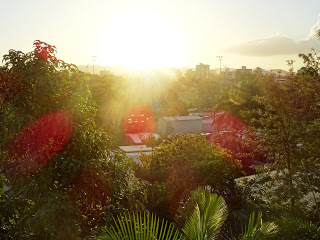 Pretty view from my tower block

It’s been quite a chilled week this week, mostly because I’m full of cold (yay freshers flu!) so I haven’t gone out drinking as much, but it’s still been a nice week! Sunday we all stayed in the games room instead of going to town as there have been a lot of people competing in the inter-College sports competition, so they were all pretty tired. It was really nice to stay in and just play games and chat. It was also great to be able to just leave when you wanted without having to get a bus or a taxi!

I went to a discussion about the Great Barrier Reef on Monday, where they were discussing the threats, possible solutions and problems with implementing these solutions. It was quite nice as there was a scientist, an economist and a politician, but I did feel like I needed to know a little more about the local government and the proposed developments that may threaten the reef as I felt a little lost at times. Nevertheless it was still interesting to go to and gave me a good break from work.

I now own dive gear! I own all the stuff I need to have (Mask, fins, boots, snorkel, dive knife and a surface safety-marker) and I got it all for a fairly decent price (I think). It’s quite exciting as I’ve only ever hired stuff before! Now I just need to get diving. 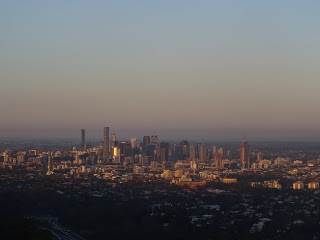 Brisbane from Mount Coot-tha, which Elise and I climbed last week

This Wednesday was Ekka, a public holiday (so no classes) where they have a big county-fair style event on for a week. We were contemplating going to see the markets, but work and weather led to us holing up in a common room and waiting for the first thunderstorm since I’ve been in Australia. I admit I was rather underwhelmed, but I’ve been reassured that the spring/summer storms will be more spectacular.

Other than that it’s been work, work and more work! I’m focussing on shifting this cold and getting my work up to date so I can have fun over the next few weekends. I’ve got dives planned, field trips coming up and all sorts – so I think this will be the last quiet week in a while, which is good! I came to Australia for an adventure so an adventure I shall have!