So I can quite honestly say that Tasmania is one of the most beautiful places I have ever been to. It’s a different beauty from the golden sands and tropical forests of Northern Queensland that Australia is famous for, but it was stunning. There were so many different kinds of environments on such a relatively small island that it was kind of crazy! Mountains, forests, moors, rolling green hills, exposed British-esque beaches and then sheltered beaches that wouldn’t look out of place on a postcard from some tropical island.

Even if it wasn’t such a gorgeous place I probably would have still loved Tasmania as I did an 8 day tour of the island with UnderDownUnder and I met really great people. From cider and card games in the evening, to photobombing each other’s photos on the beach and climbing rock cliffs to get a better view, I had such a great laugh and I count myself lucky that I had such a fabulous tour group! I might have to go visit some of them – trip to Europe anyone? The tour guide/driver for the 8 days was also fantastic, a huge thank you to Luke for the good music, informative talks and great sense of humour! 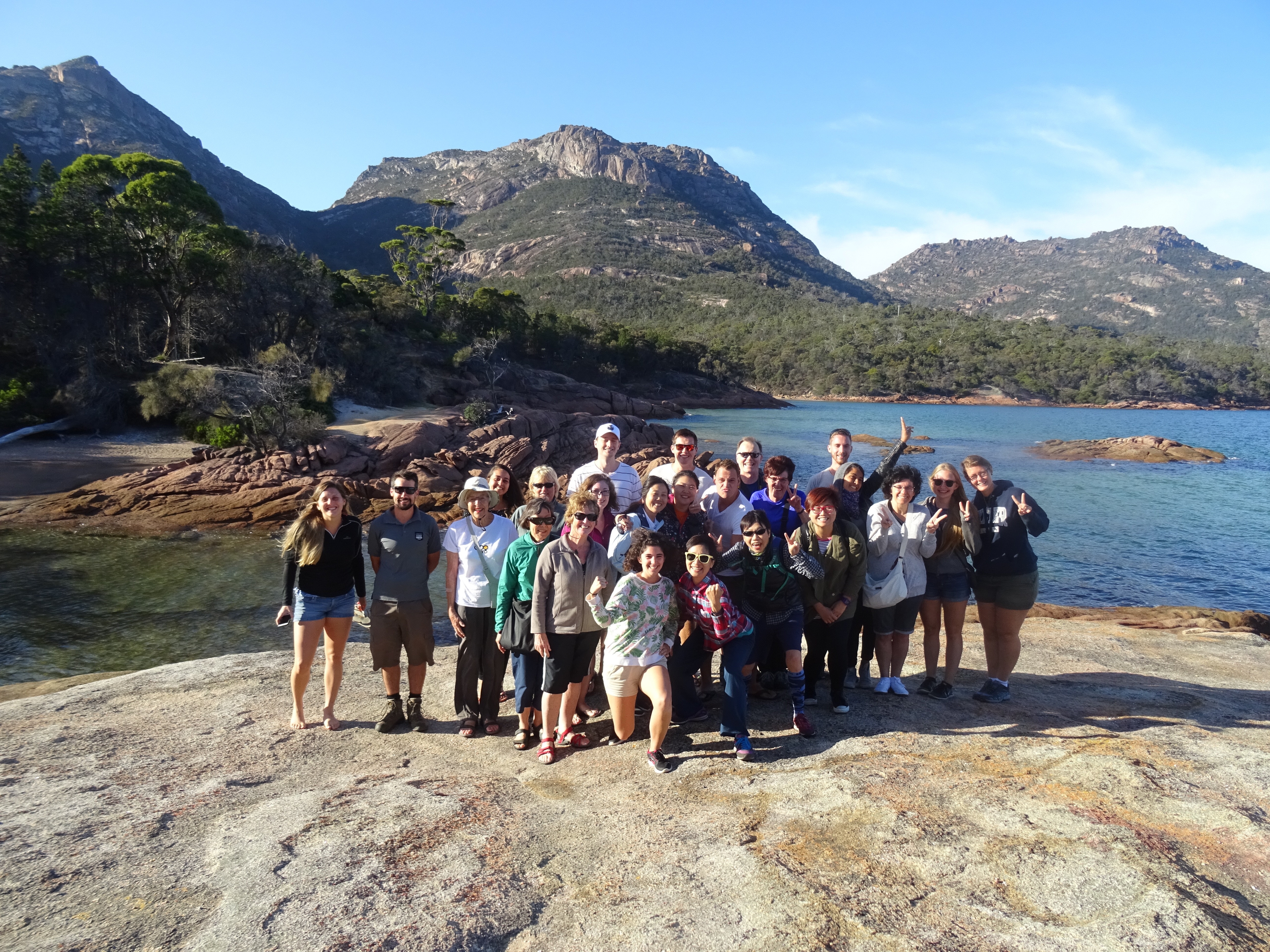 The tour group at Honeymoon Bay 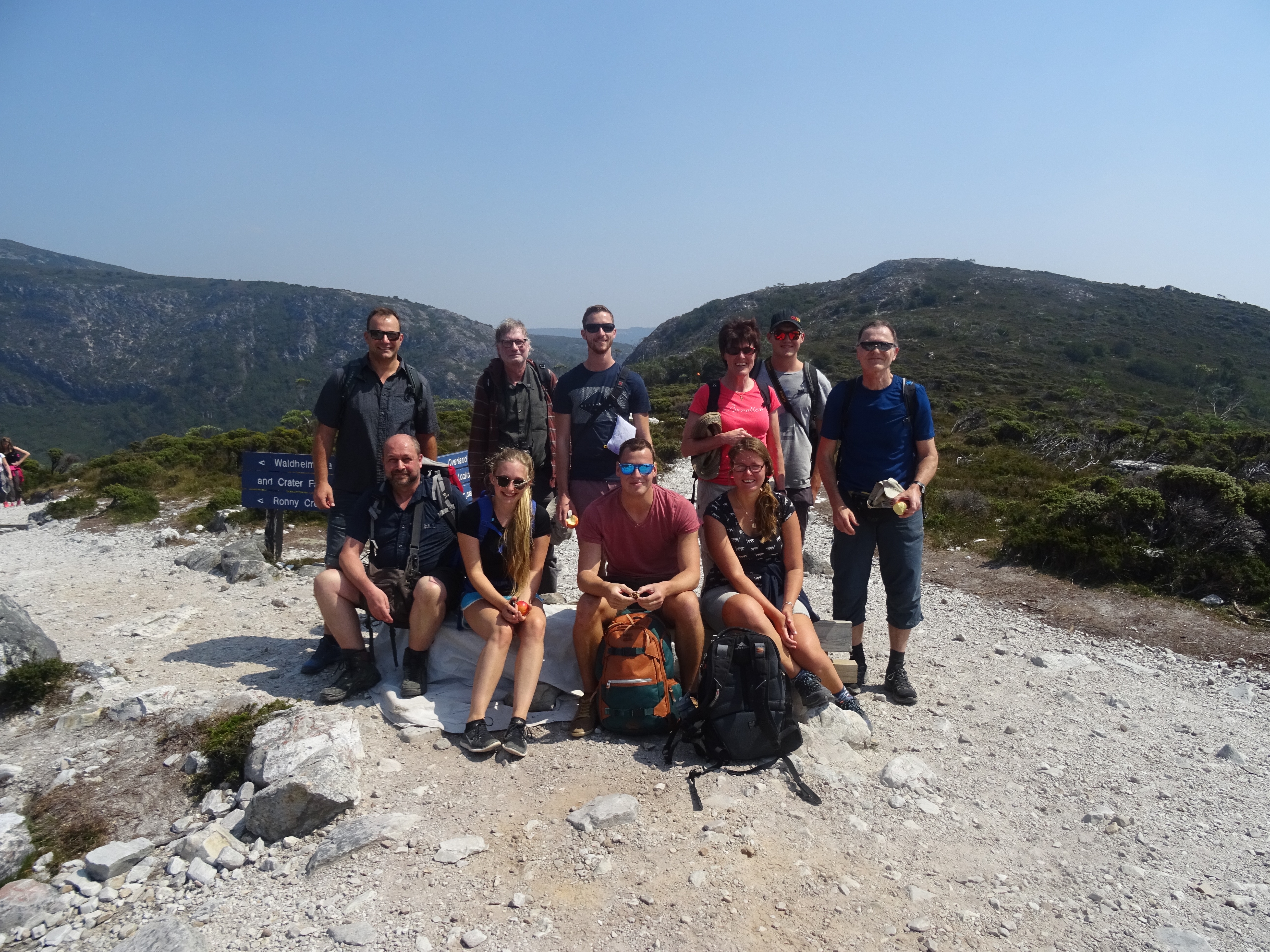 My first few days in Tas were interesting as I was travelling solo once again and I was also dog tired from the last 12 days of travelling! However, I didn’t visit Tasmania to have a rest! So, I sucked it up and went for an explore. Hobart was nice, lots of old buildings and right on the water, it happened to remind me of Falmouth and Plymouth in the UK. I managed to grab a map from the information desk that showed all the old/historical/important buildings in Hobart and I wandered around crossing a few of those off. I also visited Battery Point, a landmark within the city. 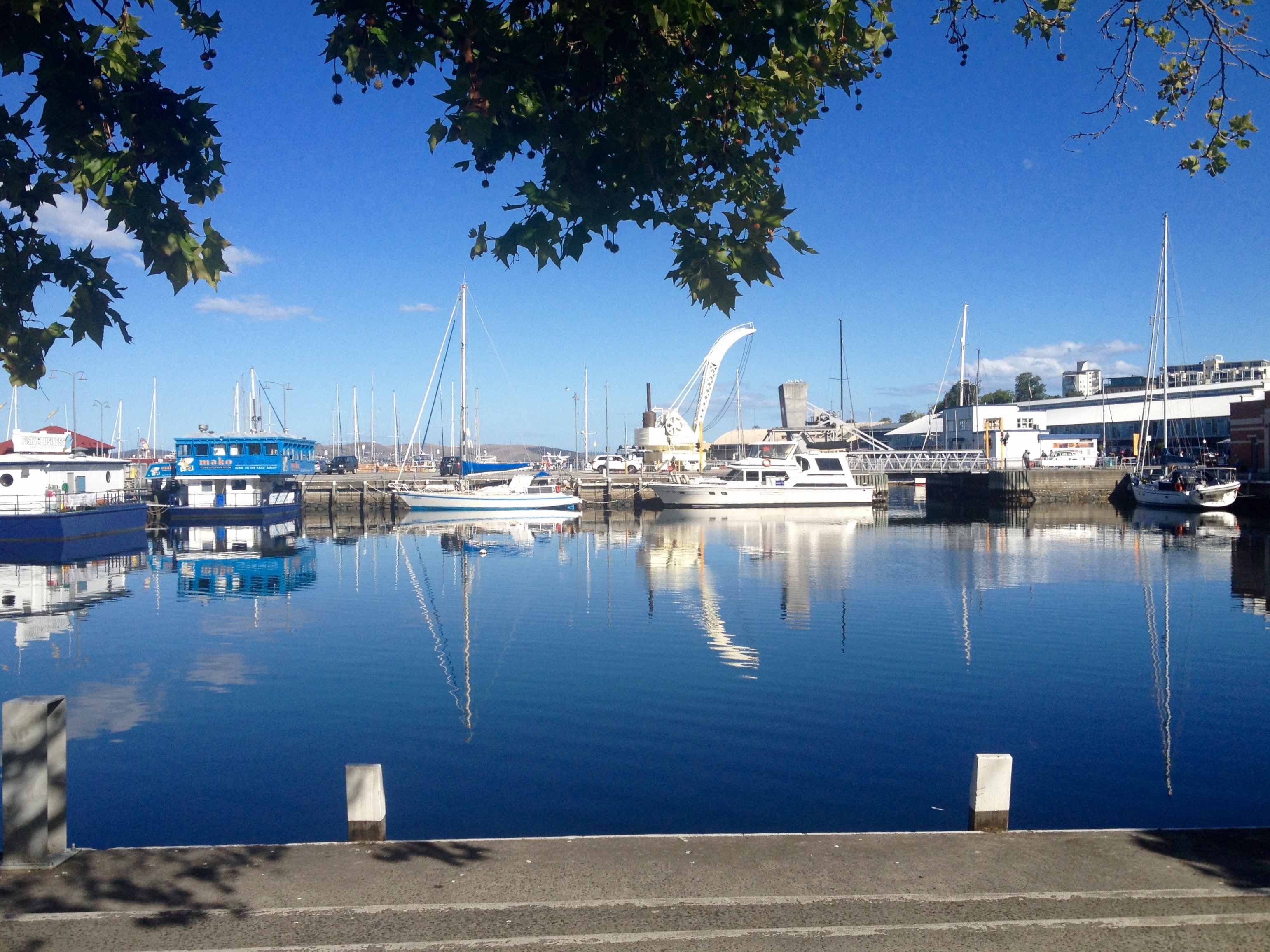 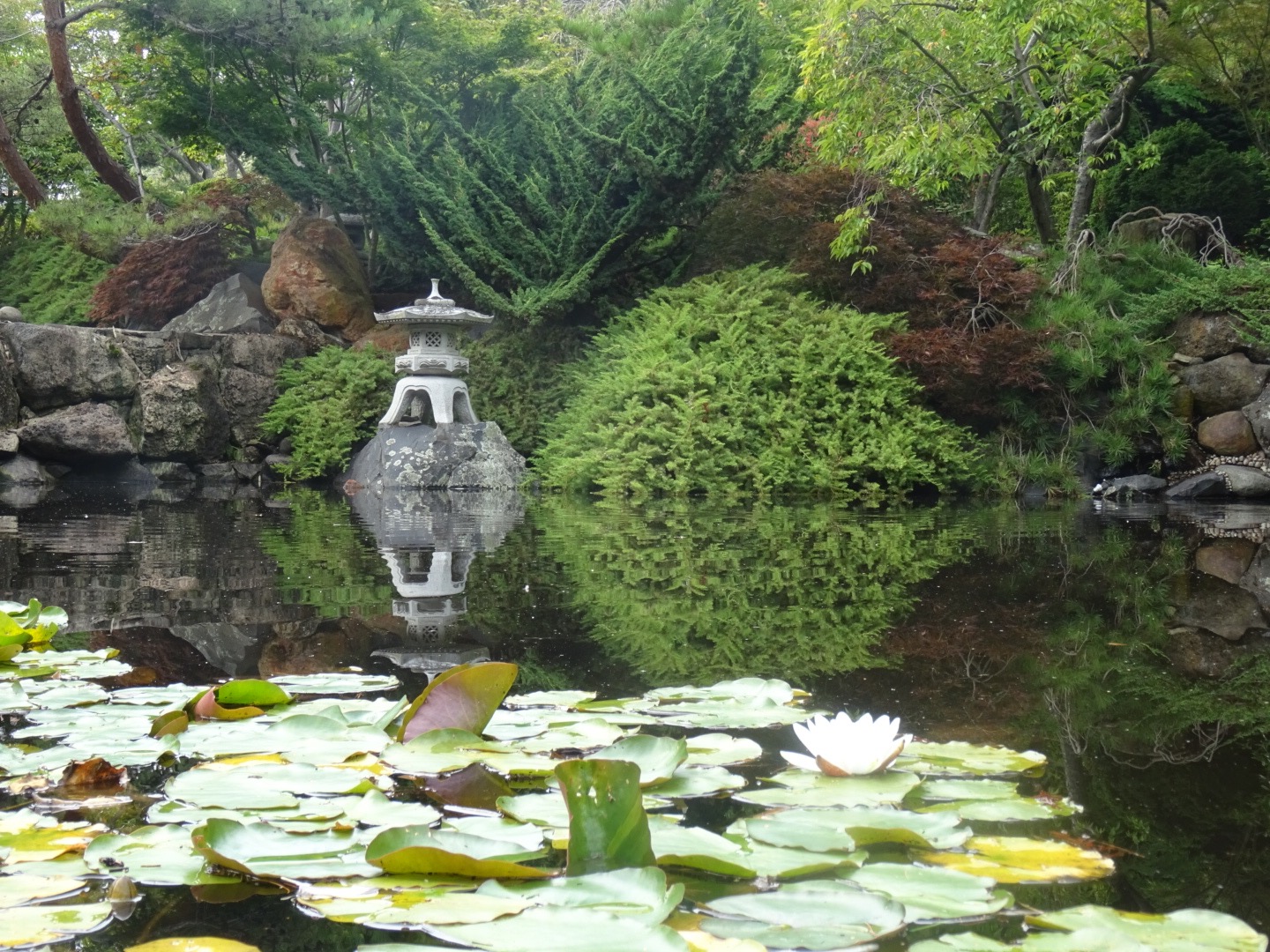 Hobart definitely felt old, it had a similar feel to Melbourne, which I loved. I also explored the outskirts of Hobart including the botanic gardens and I walked down from the top of Mount Nelson all the way back to Hobart, which was lovely. Lots of lizards, but very little insect noise which was a little odd as I am used to forests being very noisy places here in Australia!

I was also quite lucky because in the first few nights I met a group of people I got along with really quite well! I met this lovely Australian girl, Millie, and we really hit it off before becoming slightly concerned that we were long lost twins as we had SO much in common! She persuaded me to go out and have dinner with her and a few of her friends, which was such a nice evening! Later turned out that one of the girls would be on my tour for the last few days and that another was a mutual friend with a Swiss guy on my tour! Small world! Anyway, Millie and I also hung out the next night before I went on my tour and we had such a lovely evening, it’s such a shame we didn’t have more time together! She even waved me off on the tour the next morning which was super sweet!

One evening we even went to a climate change conference – ‘species on the move’, and listened to a load of climate change scientists and other speakers discuss the effects of climate change and global warming on species around the globe. It was really interesting to hear everyone’s experiences and what they thought should and/or could be done to help.

The tour itself was fantastic, it took us from Hobart through the mountains to the west coast, including Queenstown (briefly) and Strahan. This part of the trip was pretty cool as it felt a lot like some of the forests from back home. We went on a tall trees walk, had lunch at Lake Sinclair and visited the Franklin river and the Surprise river. The water here was super fresh and we filled up our water-bottles! We even had a singalong in the bus which was quite funny. 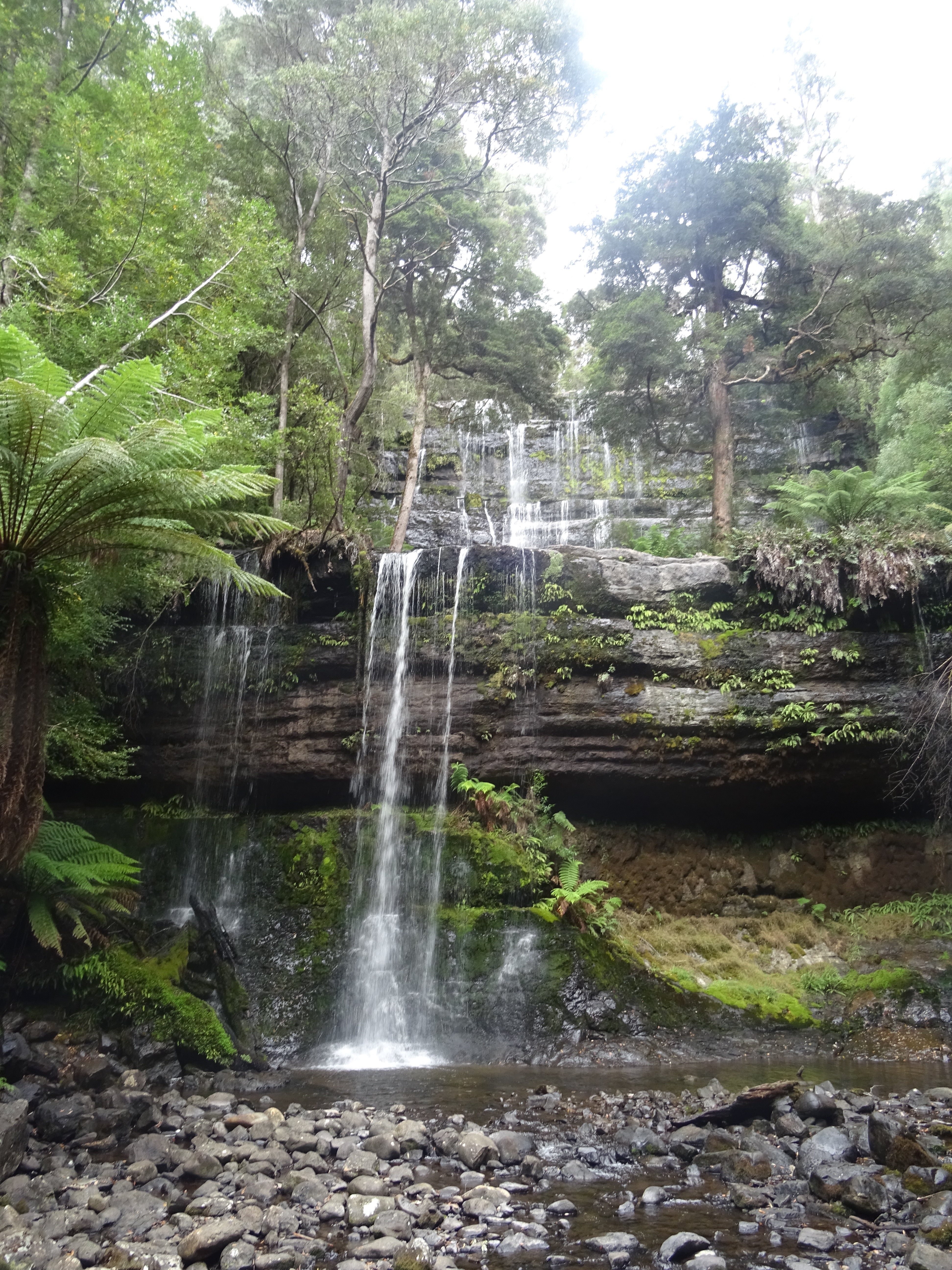 The waterfall from the tall trees walk 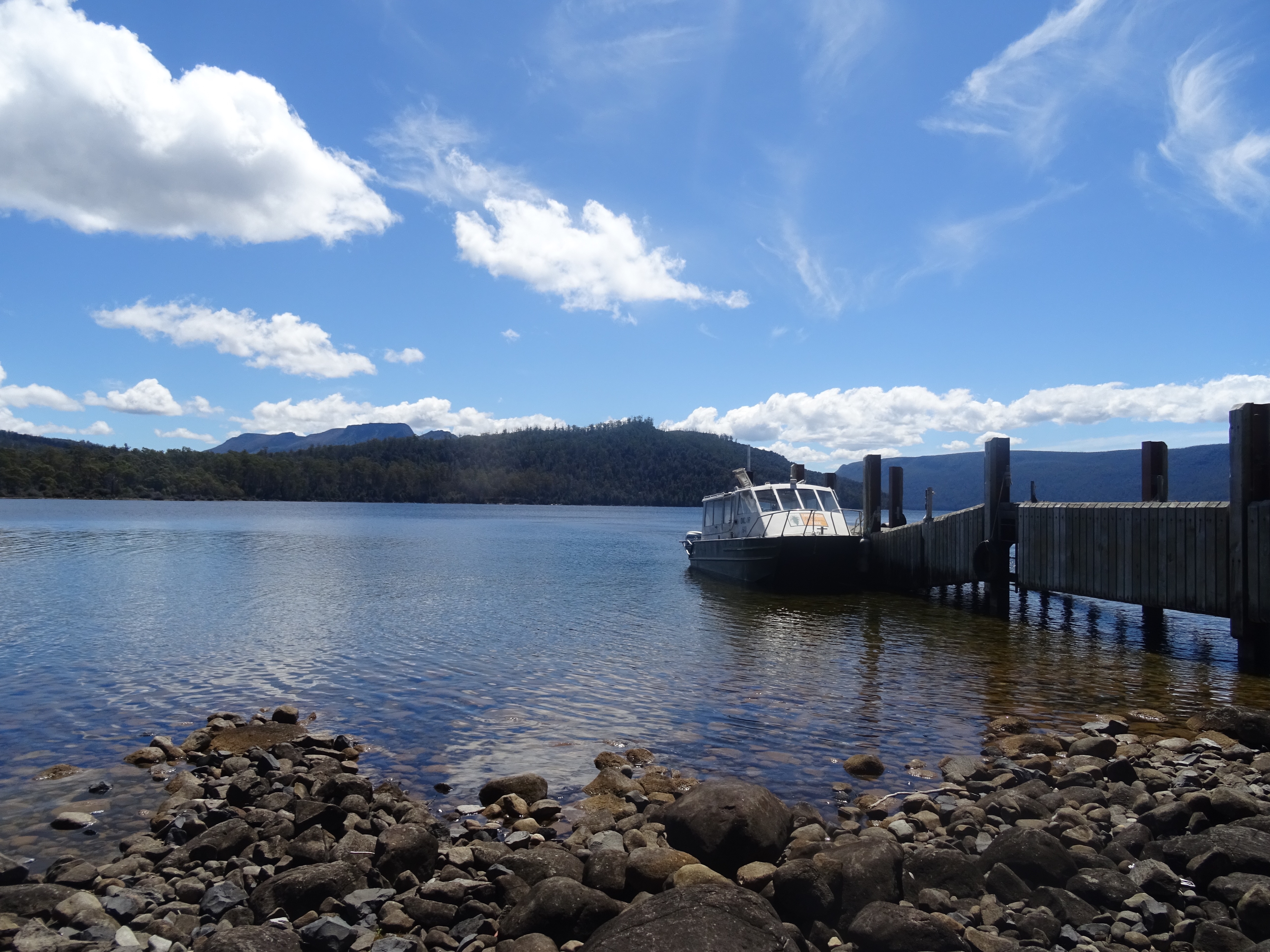 Whilst in Strahan we went to see Montezuma waterfall, which involved a little walk through the forest to the waterfall. It was a lovely walk, a lot of it was along an old track for a train or tram, and you could see a few shafts where they’d dug into the side of the rock for mining. The waterfall was gorgeous, and pretty tall too! But the walk back was my favourite bit as we stumbled across a tiger snake! It was so cool that we got to see a poisonous snake in the flesh! We also went to the beach, mucked around on some huge sand-dunes and I SAW A PLATYPUS. I’d been up at the creek early both mornings before breakfast since I heard there was one living there, but no luck. But on the evening before we left Strahan I saw one! I was so happy! 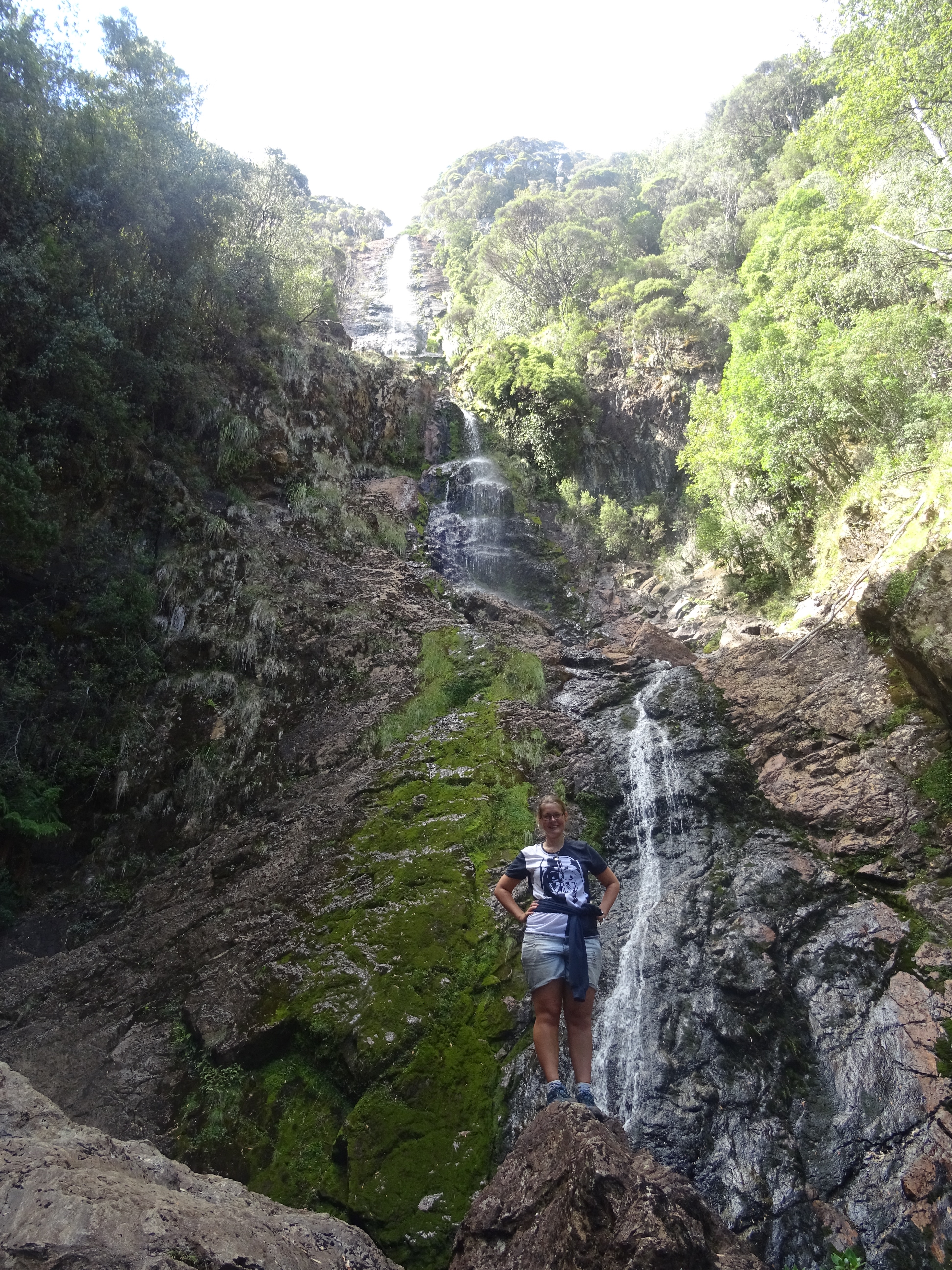 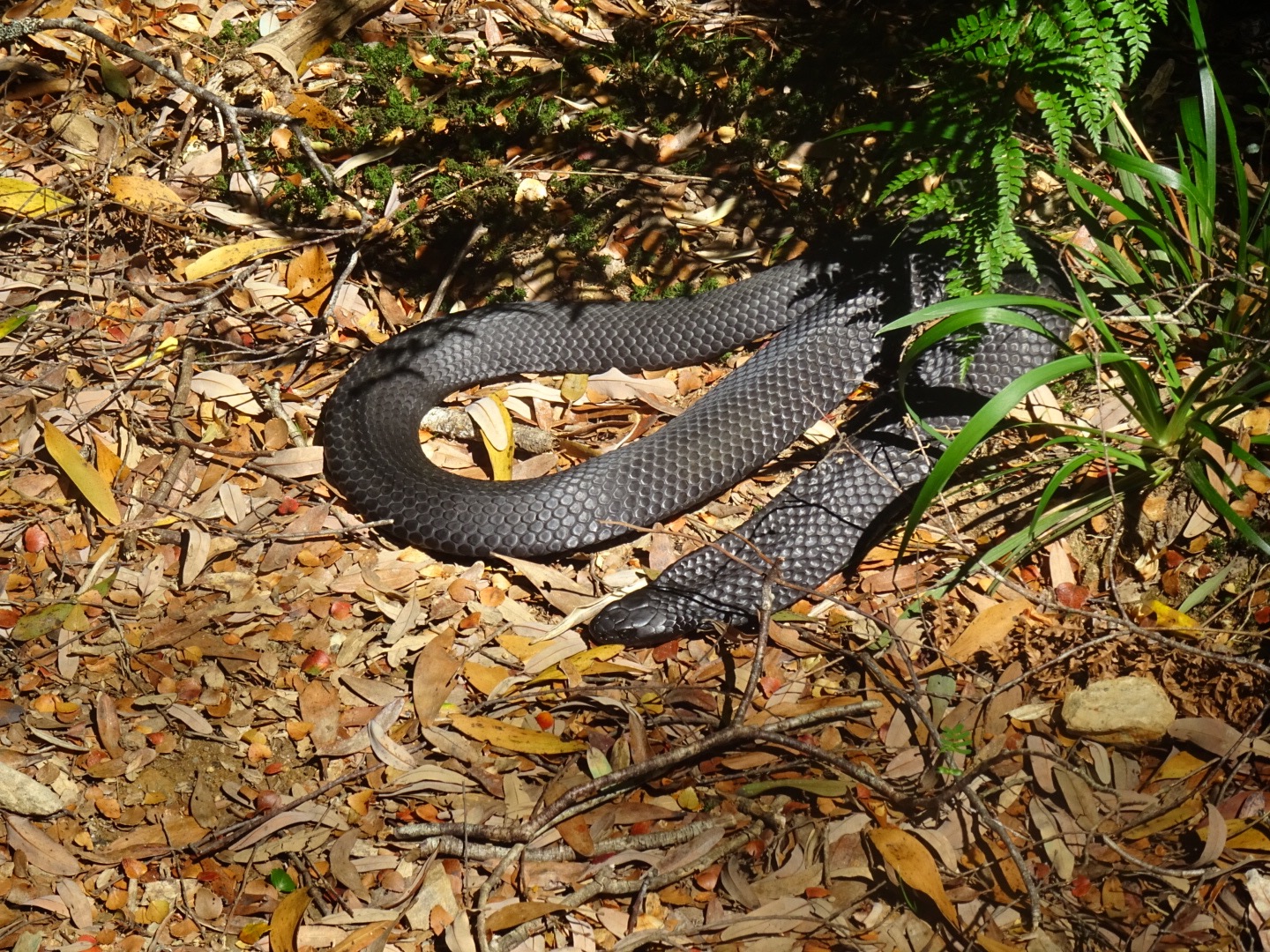 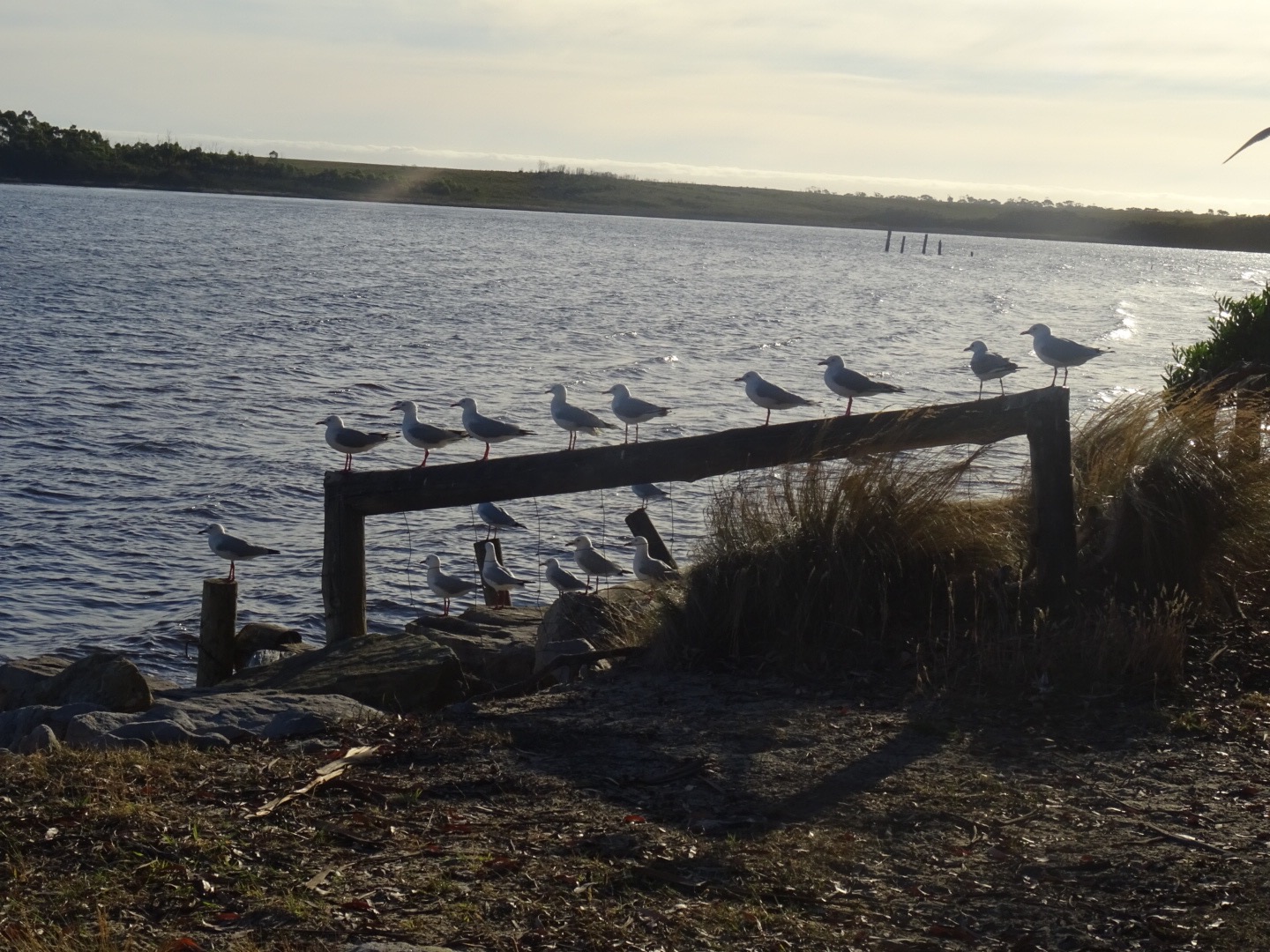 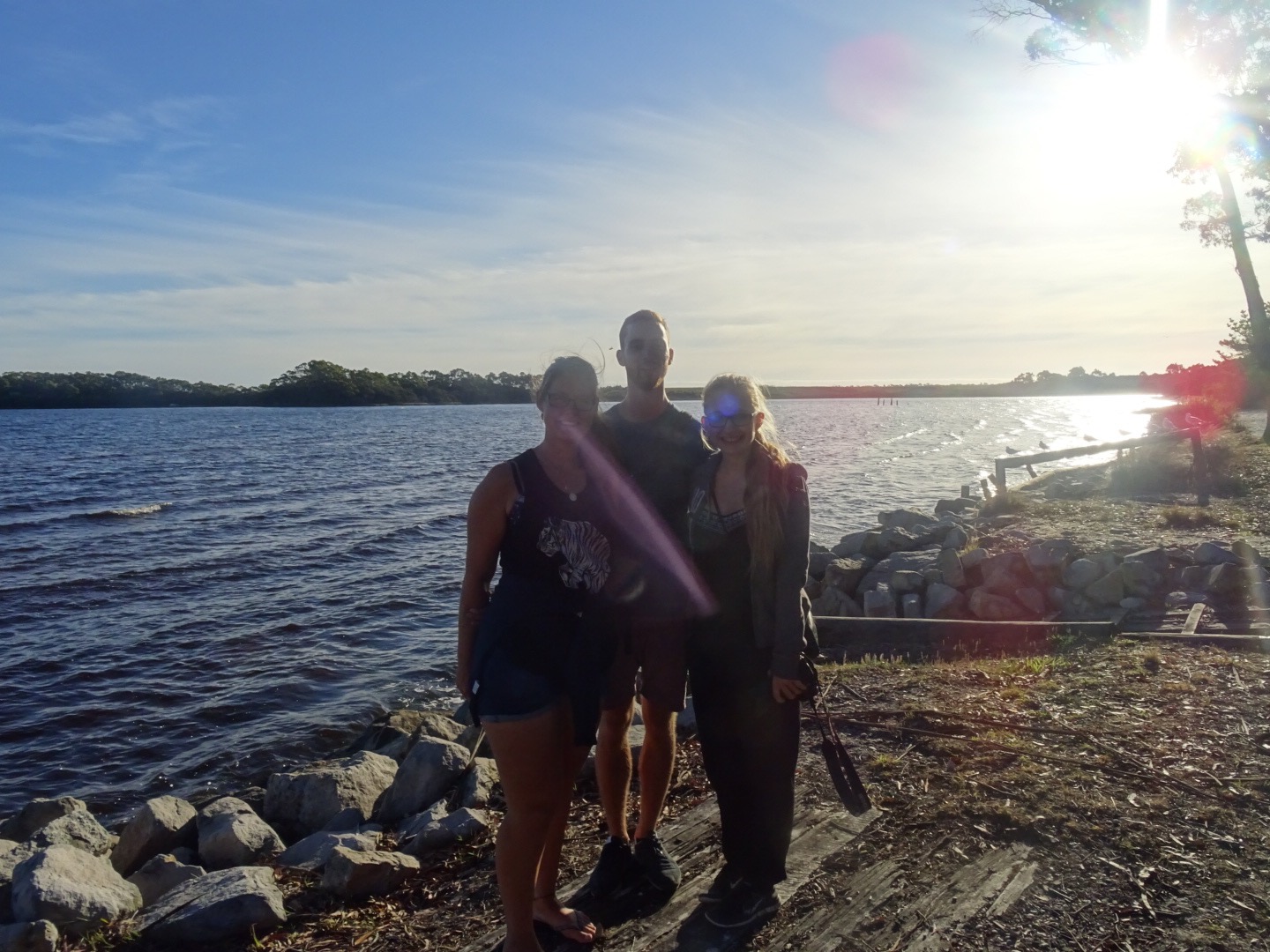 My tour buddies Luca and Jana at Strahan 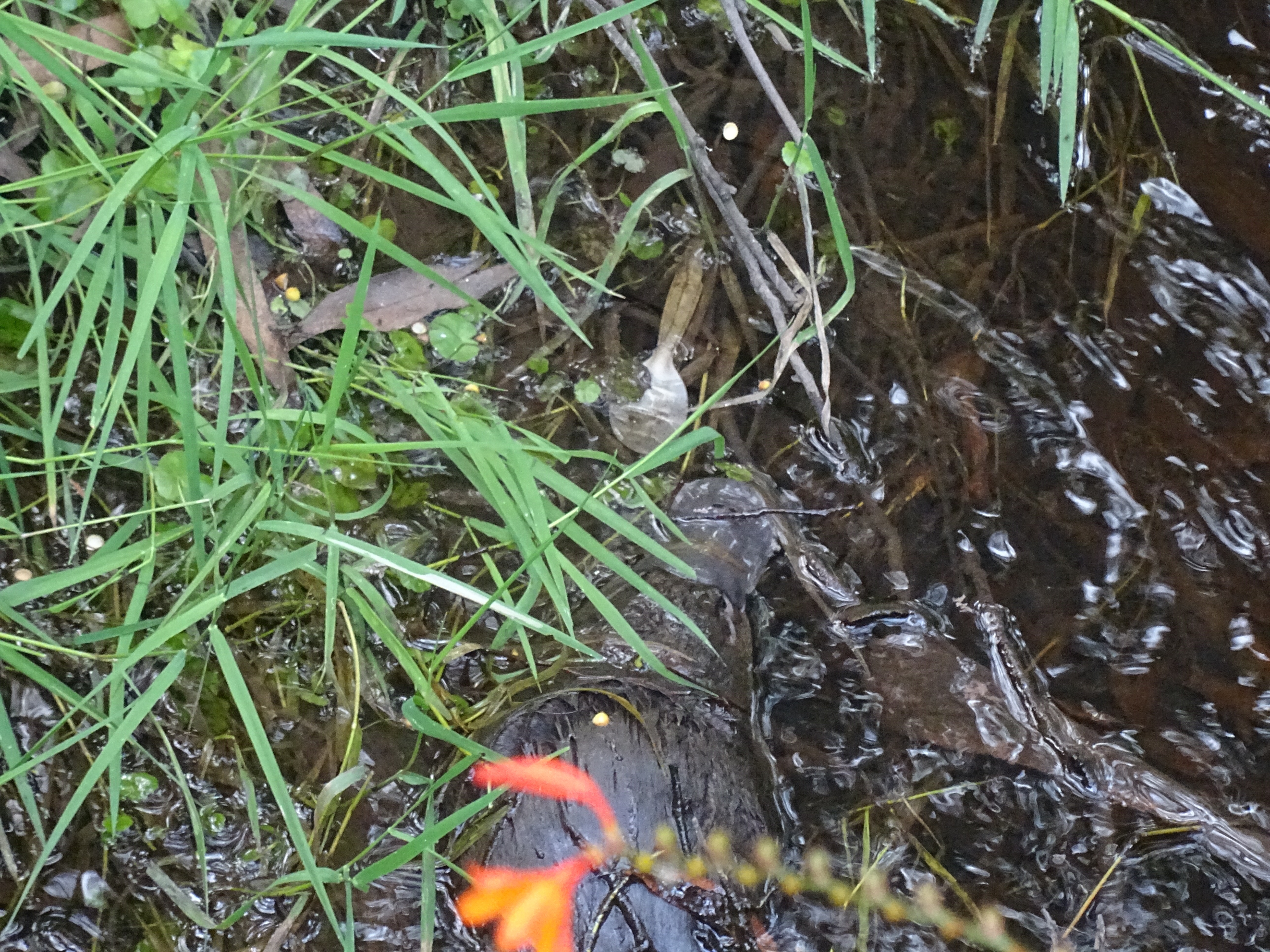 Next stop was Northern Tasmania, where we went to Cradle Mountain and Launceston. Cradle Mountain was gorgeous, but it was so smokey from the wildfires that the views were a little depleted! It was a shame, but it was still pretty impressive! We went for a walk around Dove Lake and up to the crater lake and waterfalls before coming back through the grassy valley to the minibus. I was super happy because this was where I got to see a wild wombat! It was so cute, and so big! I was so happy we got to see one, but it did mean we had to run for the bus! Launceston was cool since we went around Cataract Gorge, a gorgeous gorge with a walk all along one side before we crossed over a suspension bridge. We saw loads of wallabies and a peacock, so it was a pretty awesome walk. 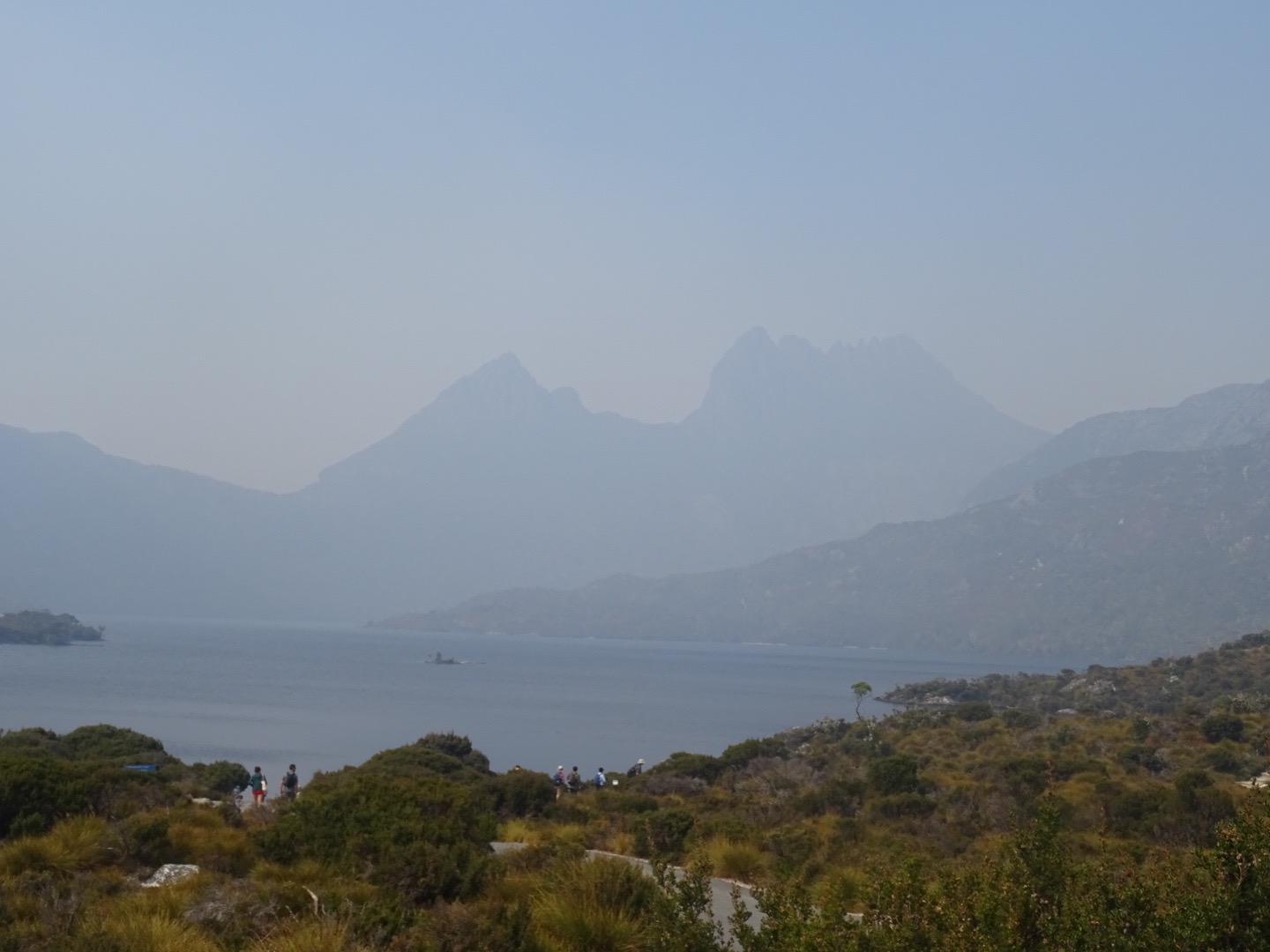 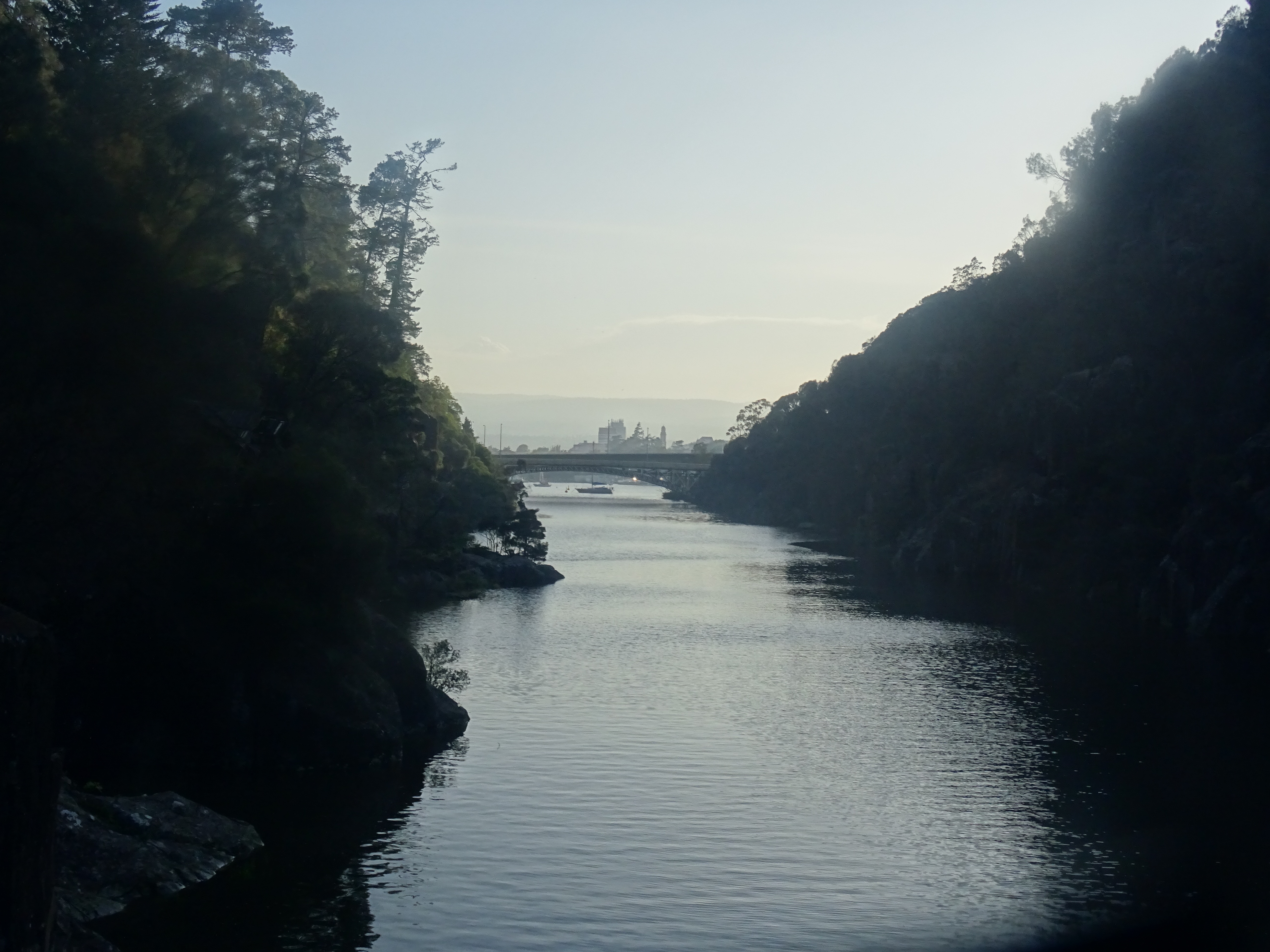 Cataract Gorge – looking back at Launceston 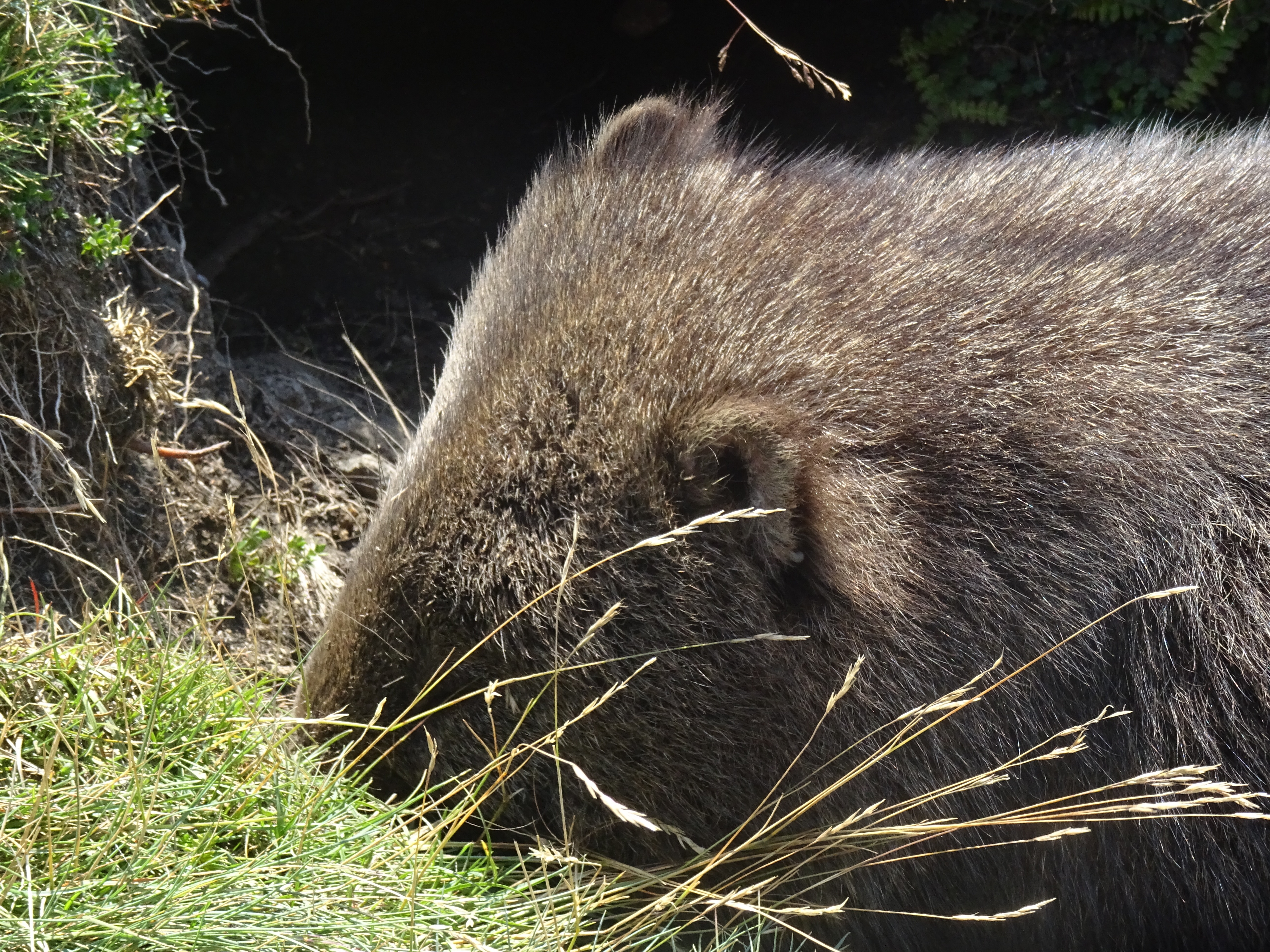 Next the tour took us to the east coast, where we visited the Bay of Fires, Bicheno and Wine Glass Bay. The Bay of Fires was really cool, we had an amazing time exploring and clambering around, as well as having a bit of a relax on the beach and eating fresh watermelon. That evening Jana and I signed up to go on a penguin tour, and we got to see the penguins coming back up to their nests from the sea. The penguins were super cute, and there were so many of them, but unfortunately we weren’t allowed to take any photos. There was a little chick that liked the laces on peoples shoes which was so cute to see.

Freycinet National Park and Wineglass Bay were just stunning. Rather than heading for the beach itself we walked up to the lookout where you could see the beach in all its glory! And it was quite a view! While we had such a great view spent a while mucking around and taking a lot of silly photos (jumping, climbing rocks etc) and generally had a really nice time. We then bumped into a wallaby that had a joey, it was super cute! On our way back towards Hobart we went to Bonorong wildlife sanctuary and got to see all the animals there, including wombats, roos, snakes and Tasmanian Devils! That was the end of the journey around Tasmania, but not the end of the tour as we had a few day trips from Hobart. 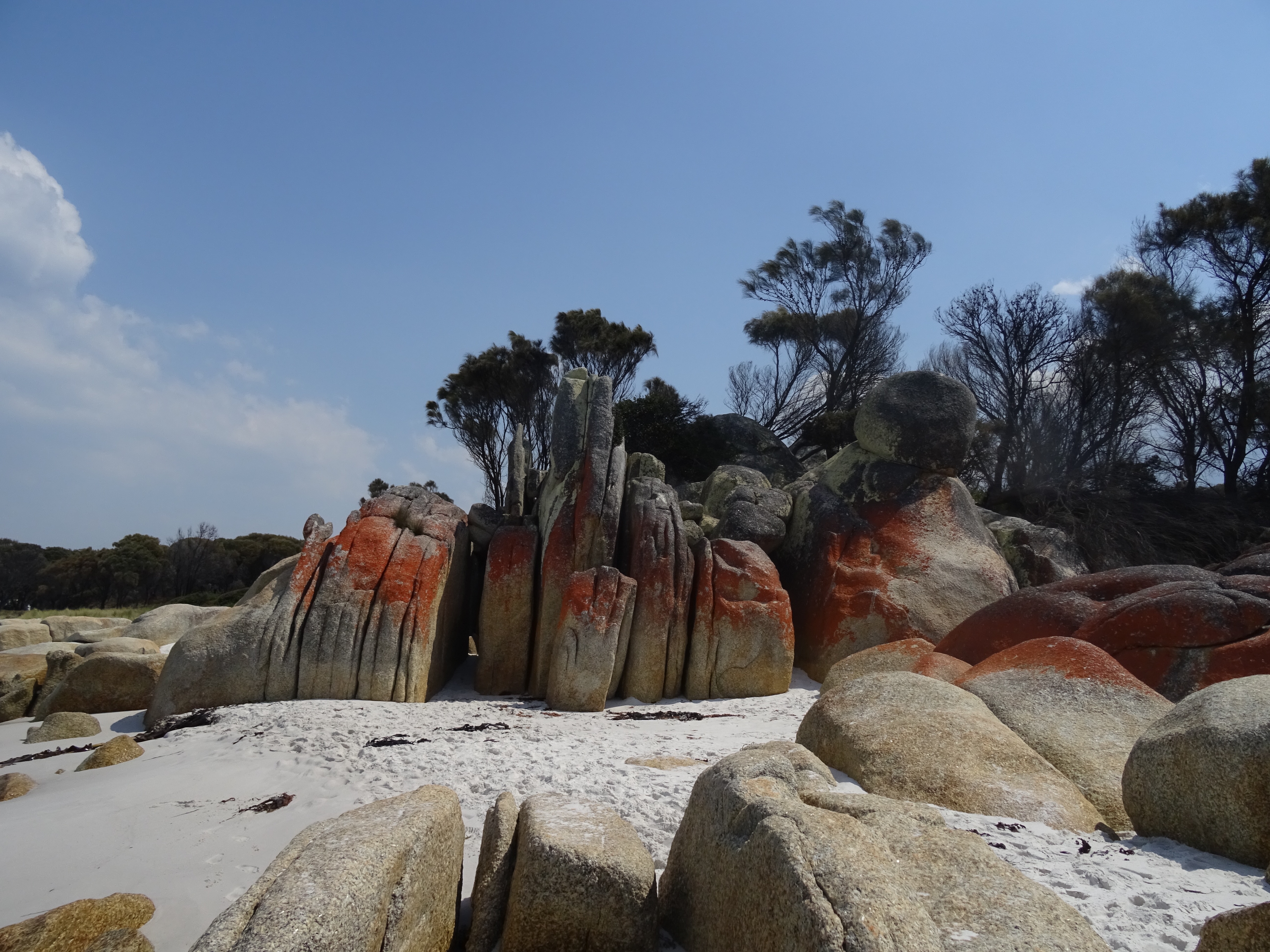 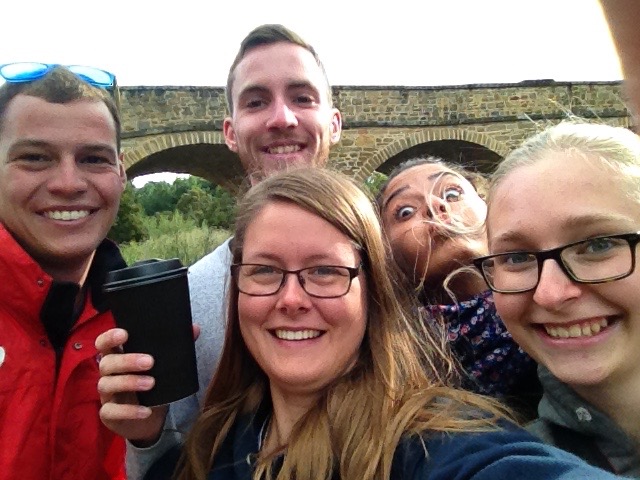 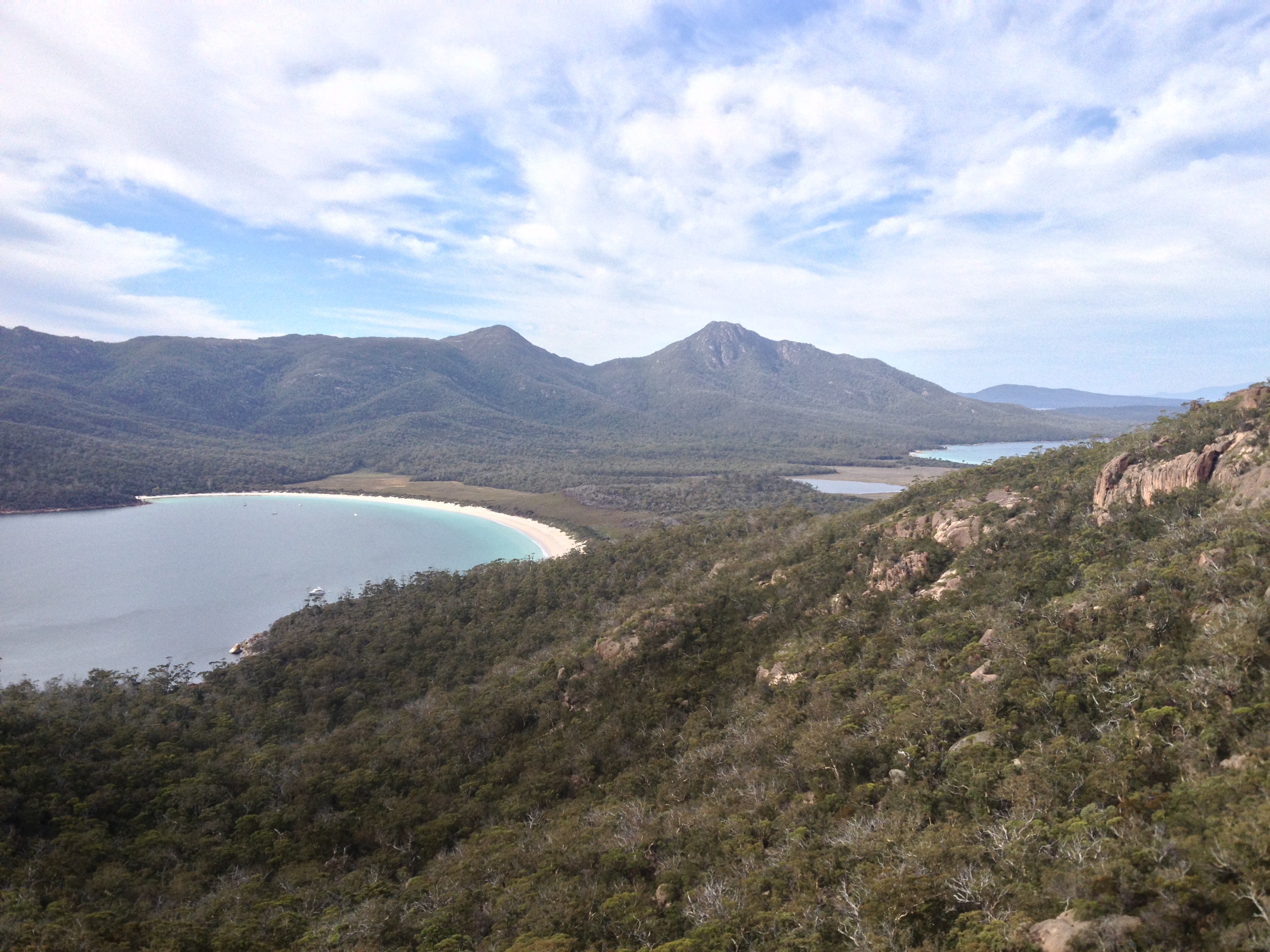 The view down to Wineglass bay 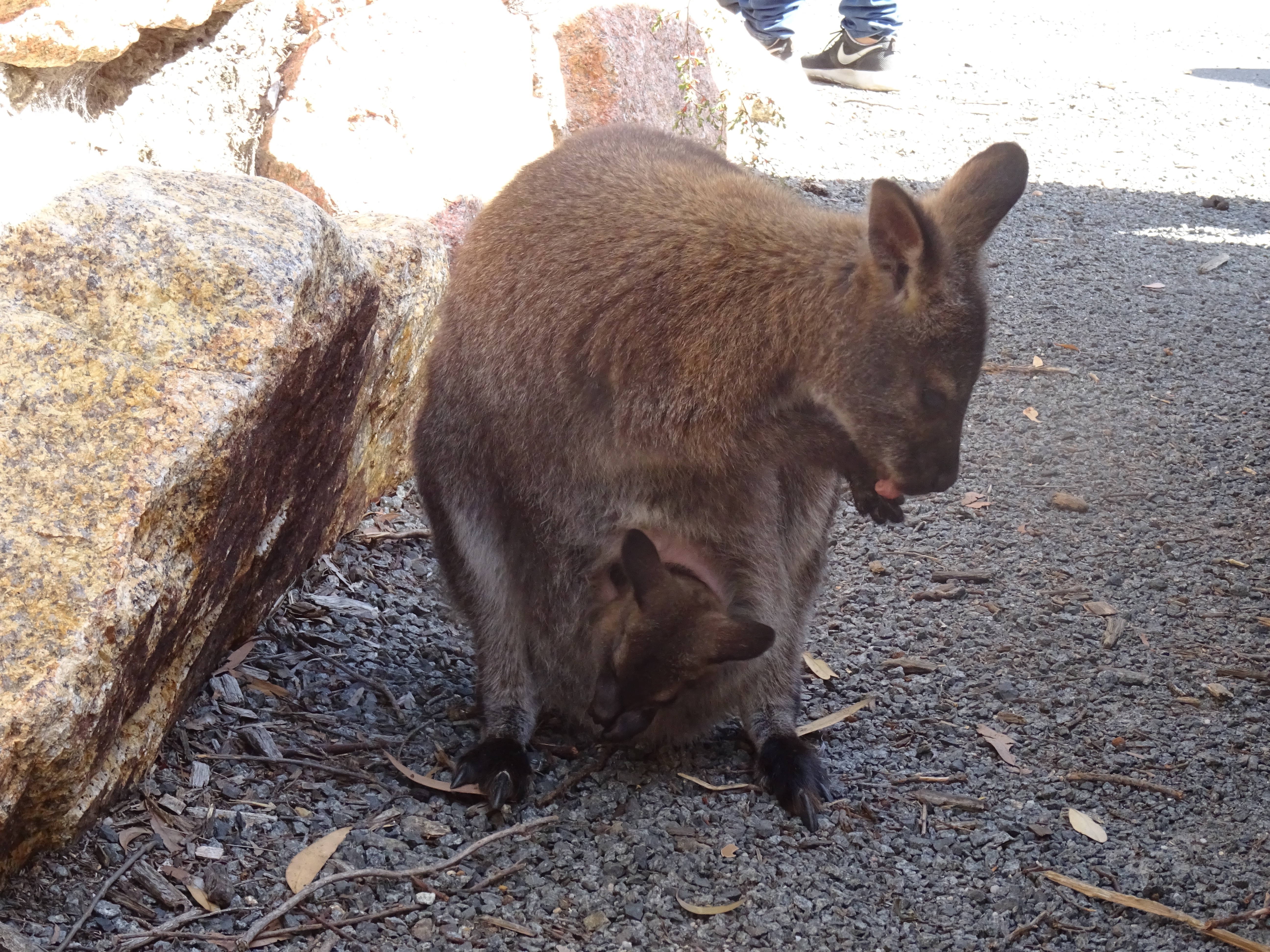 The trip to Port Arthur and the Tasman peninsula was pretty cool, the grounds were gorgeous and there were a lot of very picturesque ruins. The Tasman arch was also pretty neat, and we had some great ice cream too! The second day trip took us up Mount Wellington and then we walked down a little, taking in the great views over the city from above and also getting a good view of the rock formation the organ pipes! We also went to the Museum of Old and New Art (MONA)… which is possibly the weirdest thing I have ever been to. There was a room that was a machine digestive system, a taxidermy display that had little fairy figurines making it into a battlefield with the animals as transport, a room full of people singing ‘Material Girl’ and more. It was very, very odd. Cool and interesting, but very odd. 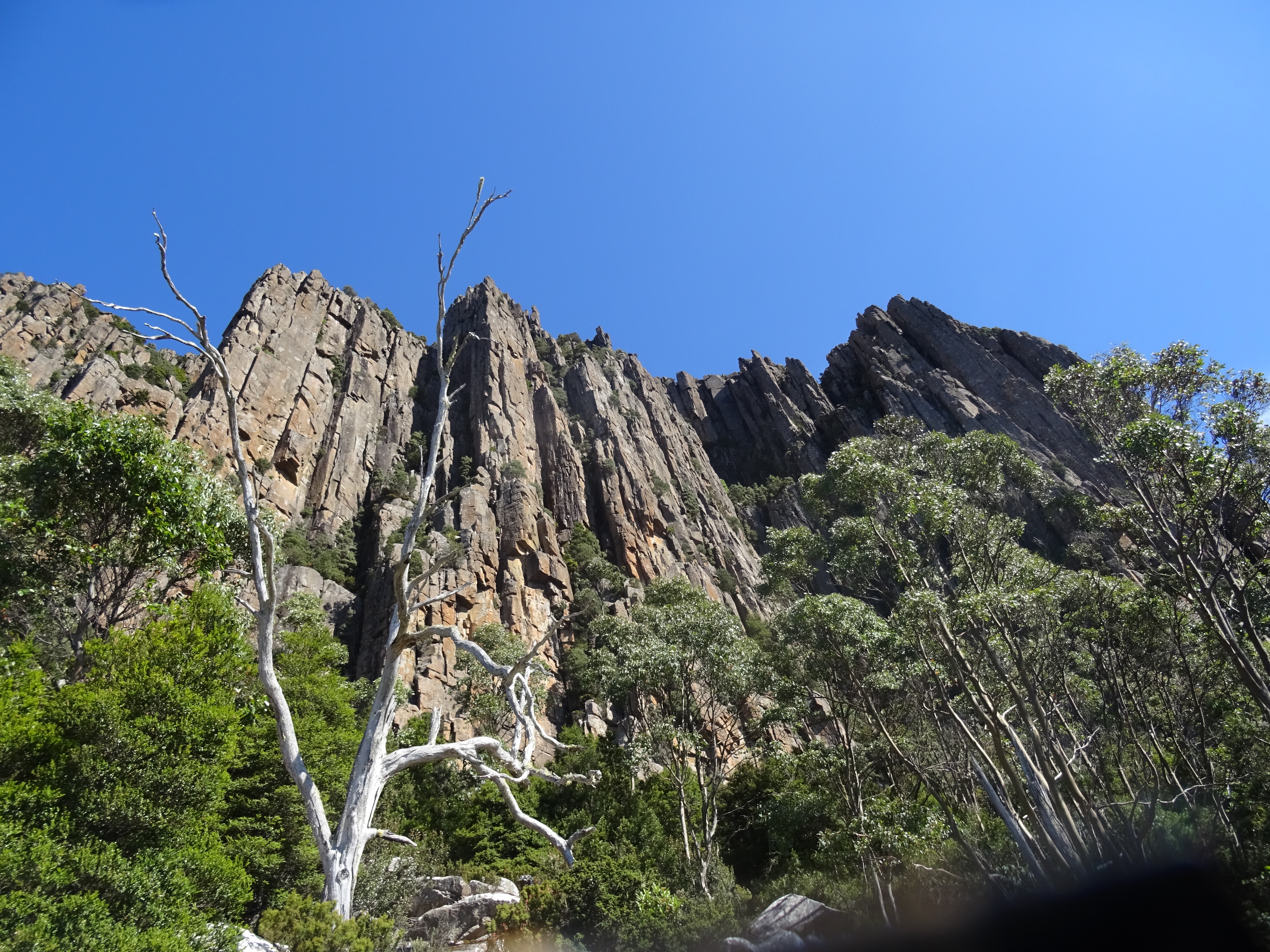 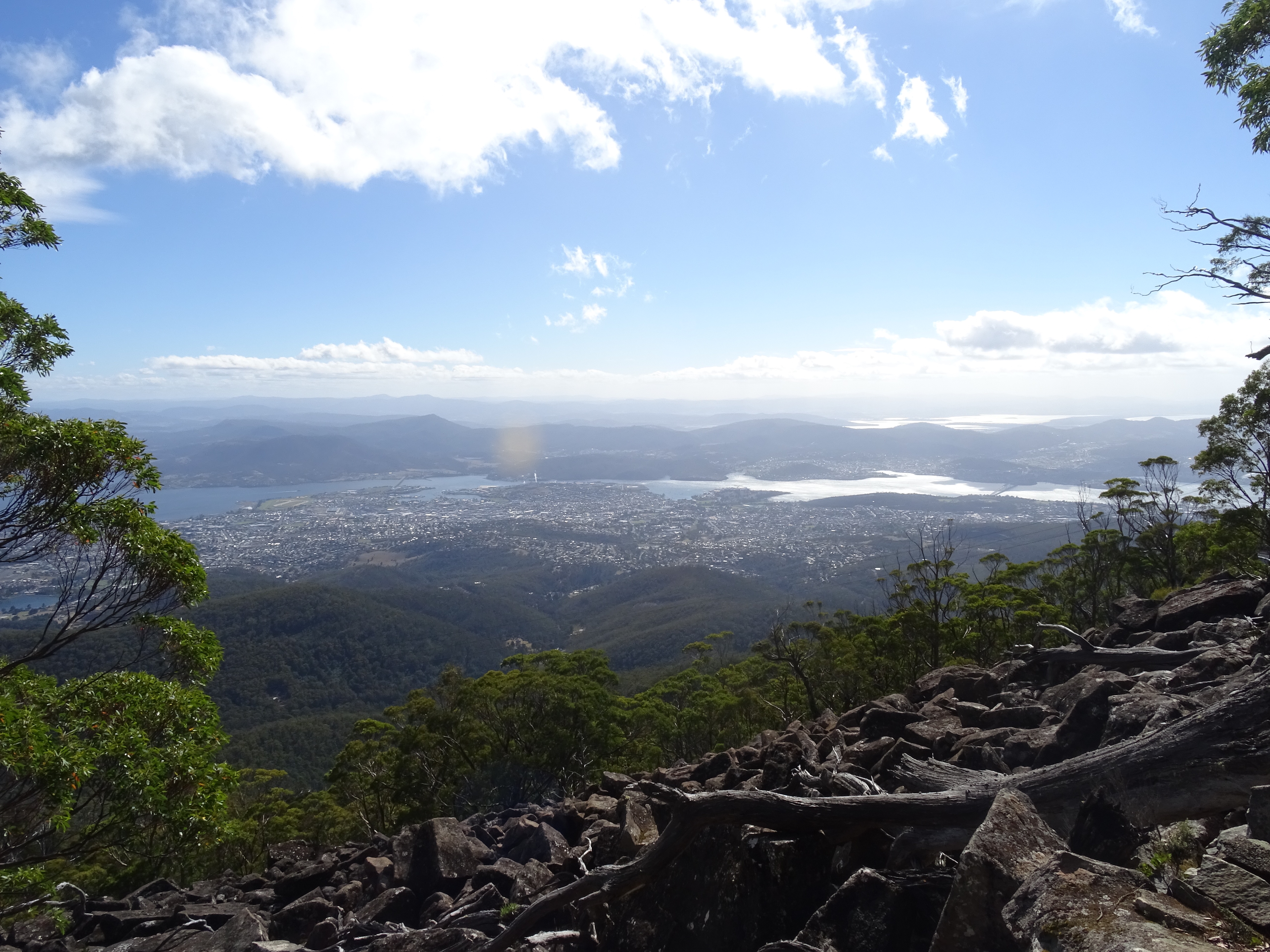 Hobart as seen from Mount Wellington 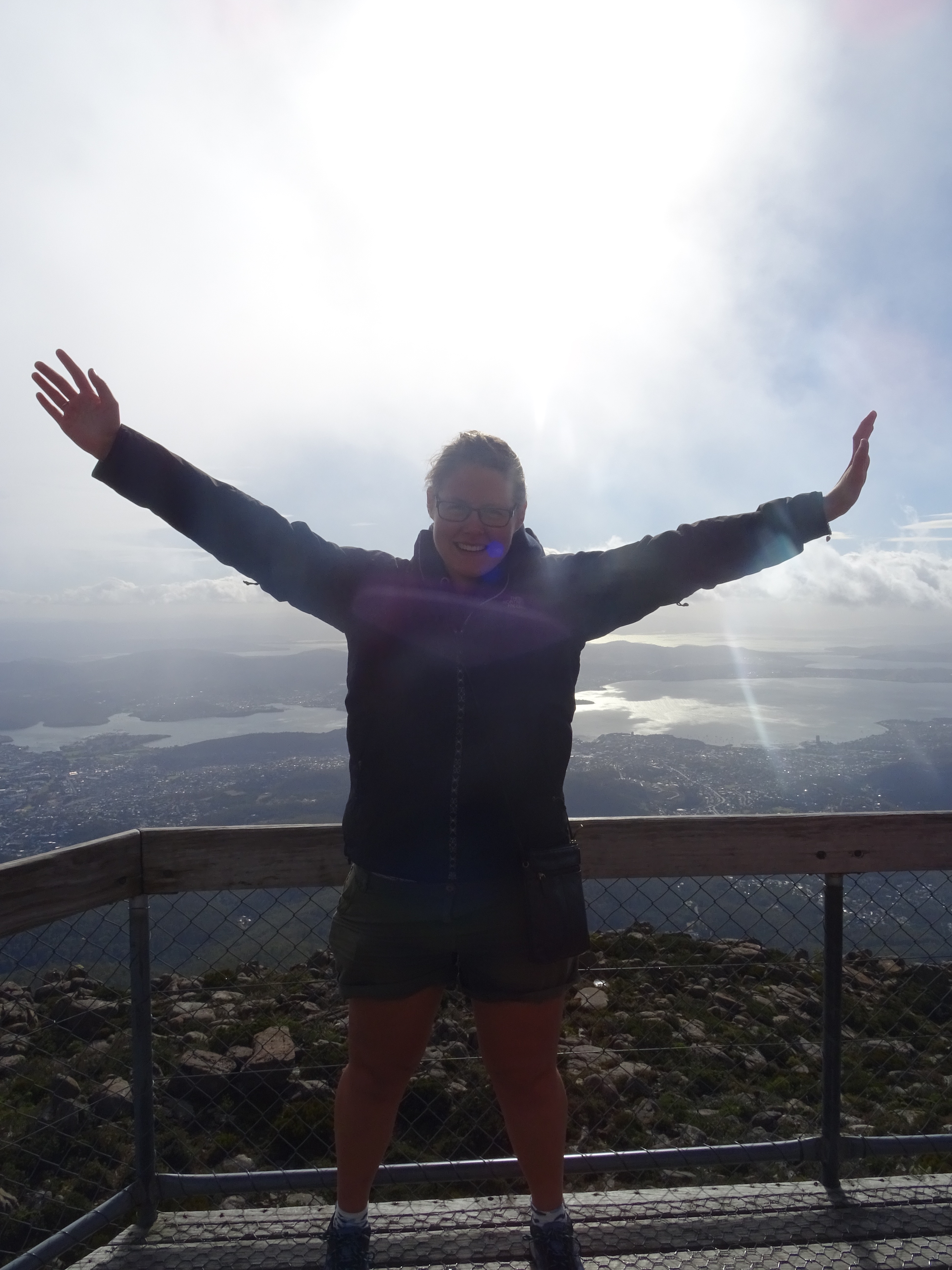 Me on the top of Mount Wellington – if I remember rightly it was about 6 degrees! 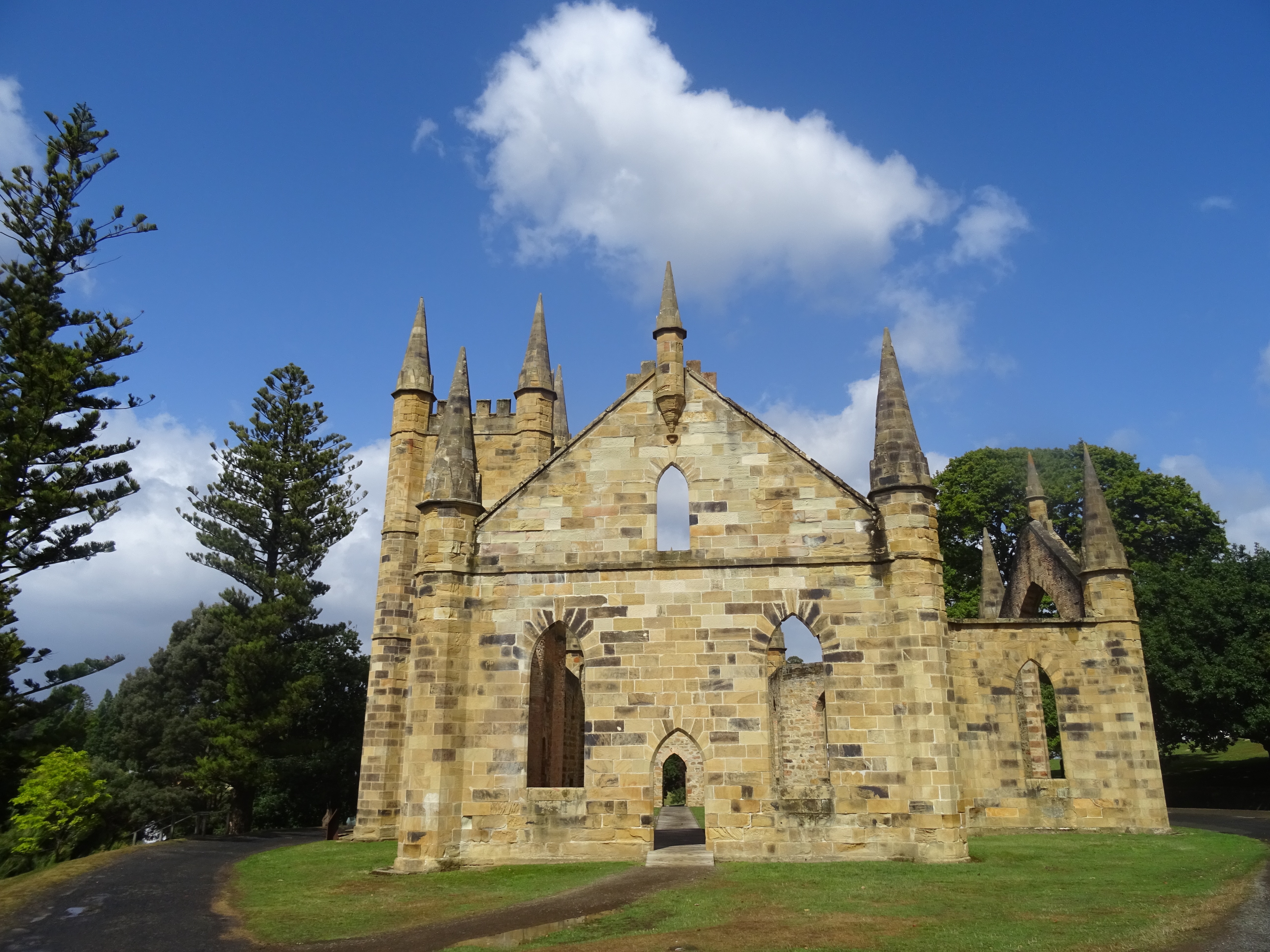 The old church at Port Arthur

The third day trip took us out to Bruny Island, were we got see some cool beaches and cliffs, visited a lighthouse, went to a lavender farm (the chocolate was weird) and then went for a cheese tasting (yum) and an oyster tasting (very much NOT yum). It was my first time trying oysters, and I have to say, I am not a fan! The cheeses were incredible though, so I’d be super game for that again! The tour was absolutely fabulous and I saw so much more than I ever would have by myself! I also made some good friends which is half the fun! On our last evening together a group of us from the tour went out for dinner in Hobart, which was lovely, and then we parted ways. 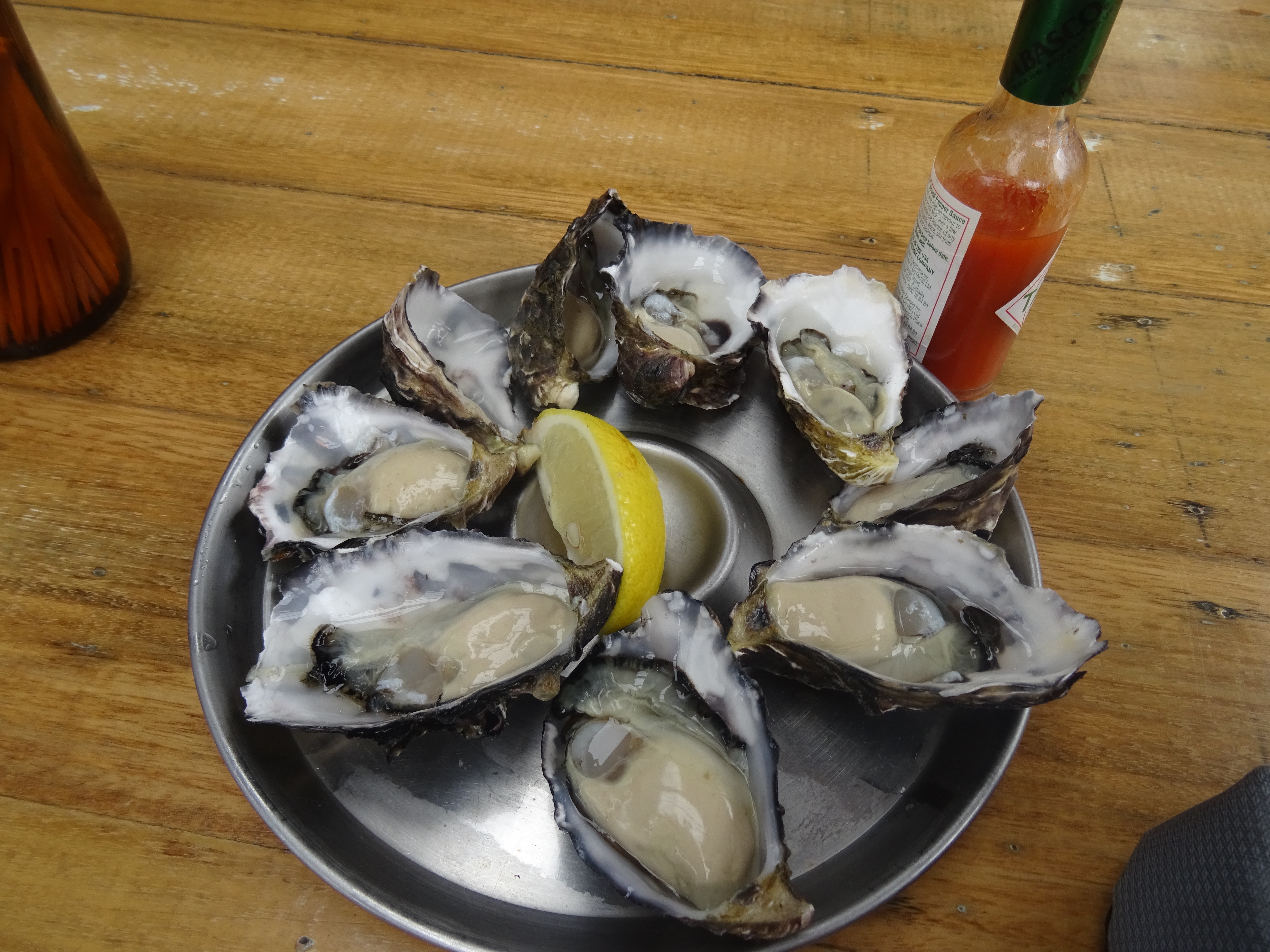 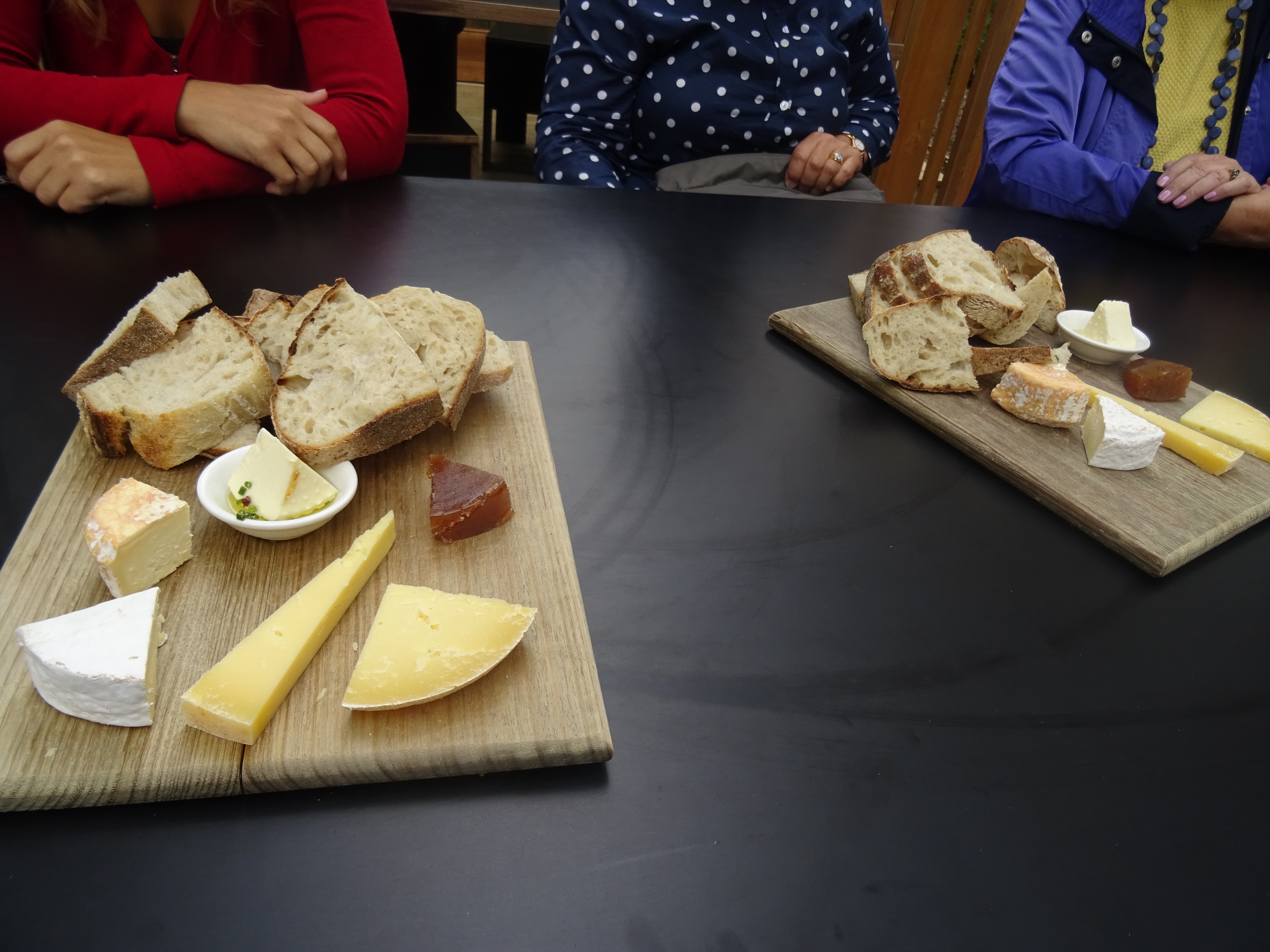 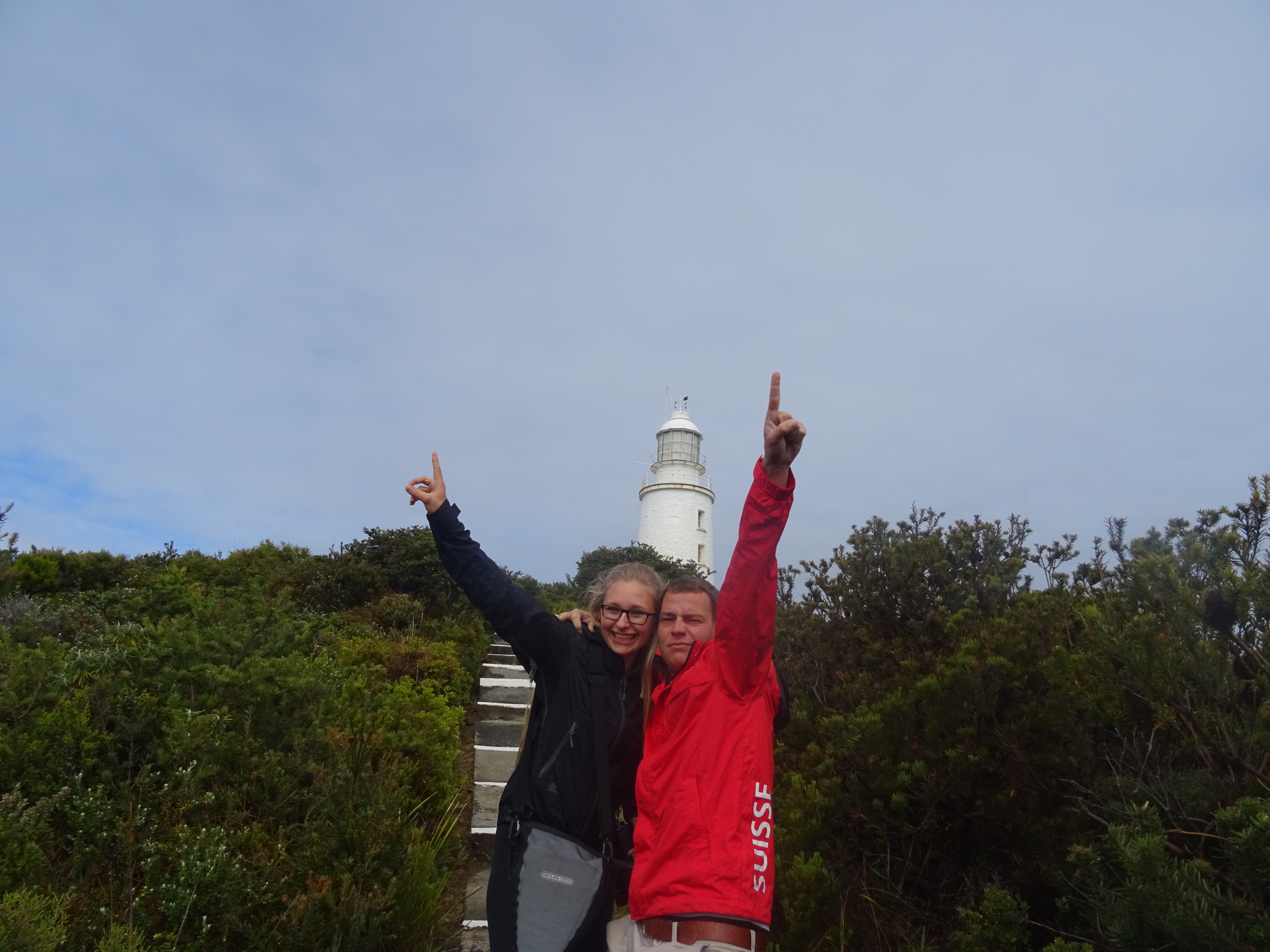 Posing for the lighthouse!

However, I still had a day left so I had booked in to go on a dive, since Tasmania is meant to have some pretty good diving! The first dive was in the kelp forest, which just felt so alien. It was gorgeous, and I saw loads of fish and an octopus, but it felt so other-worldly with the kelp reaching far above my head that it was almost spooky. Over lunch we found a small colony of fur seals, so we jumped in the water and had a little snorkel with them, before deciding that they were so playful that we might as well do the dive there! We did our second dive with the seals, and it was so incredible, they’d swim right past you and if you ducked down and swam they’d mimic you, so it was a fantastic experience, and I took tonnes of photos! Even the journey back was fun as we went THROUGH a rock arch and also stopped off at Australia’s tallest fresh-to-salt-water waterfall. It was pretty weird just seeing a river fall into the sea! 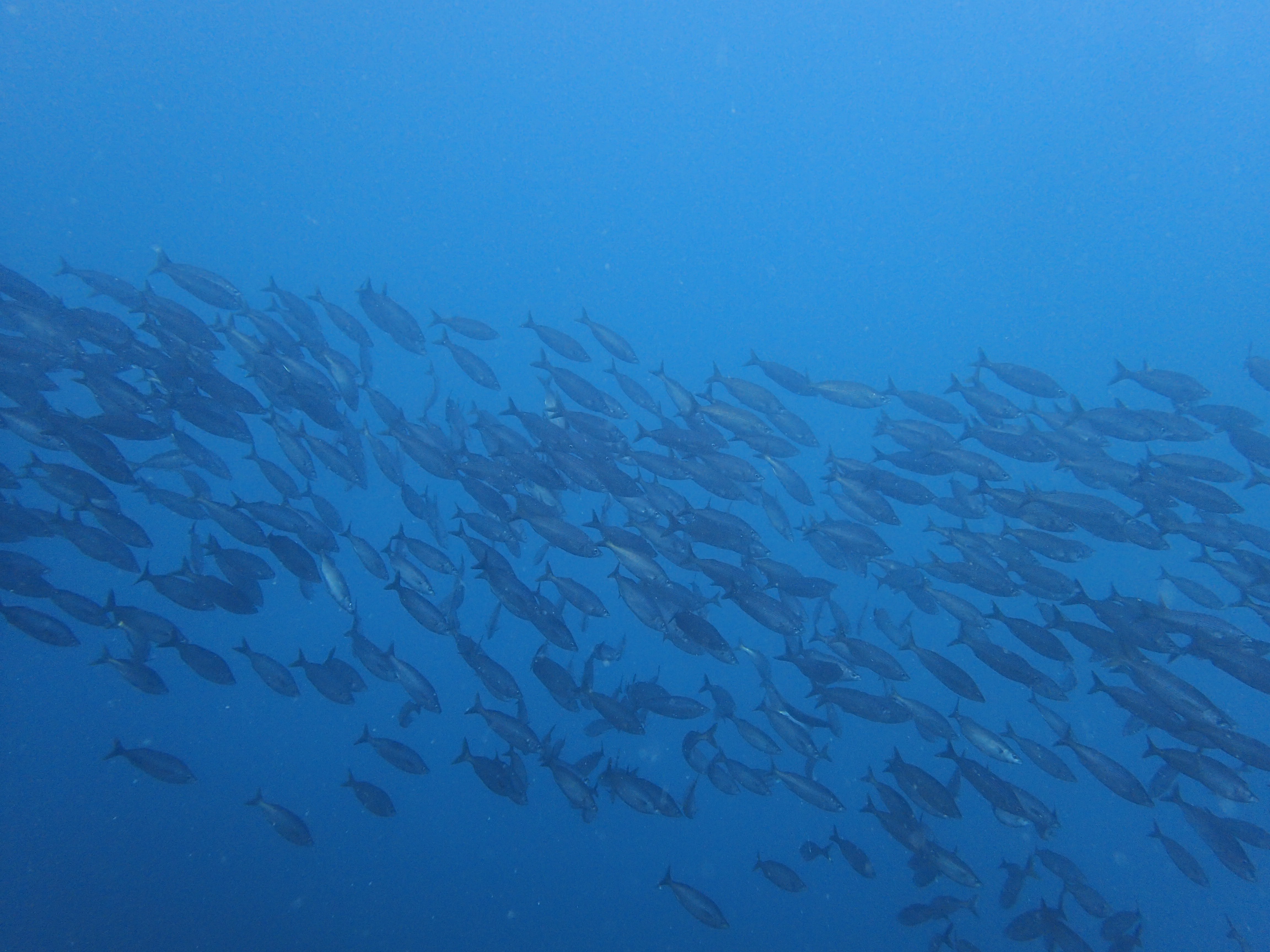 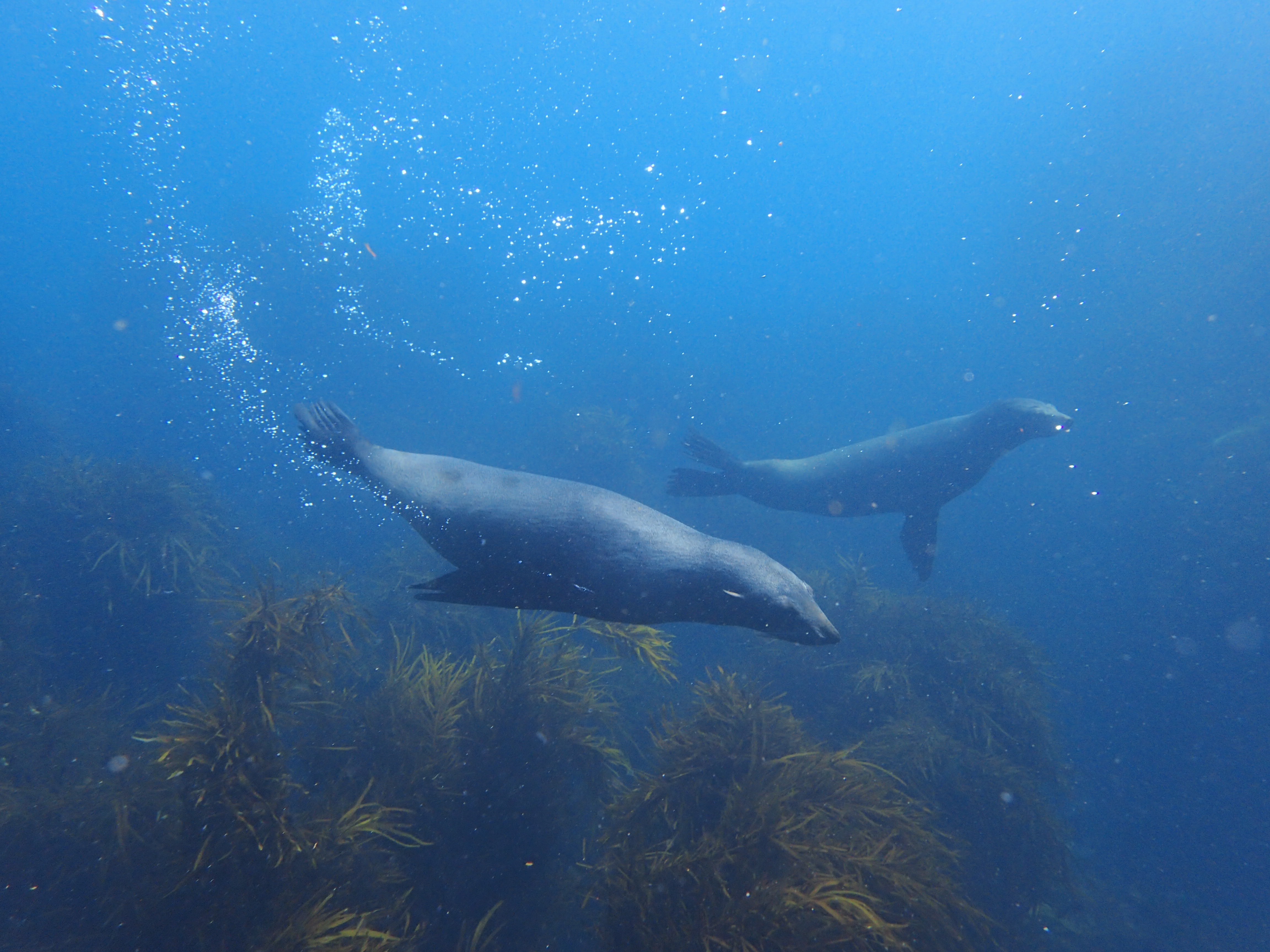 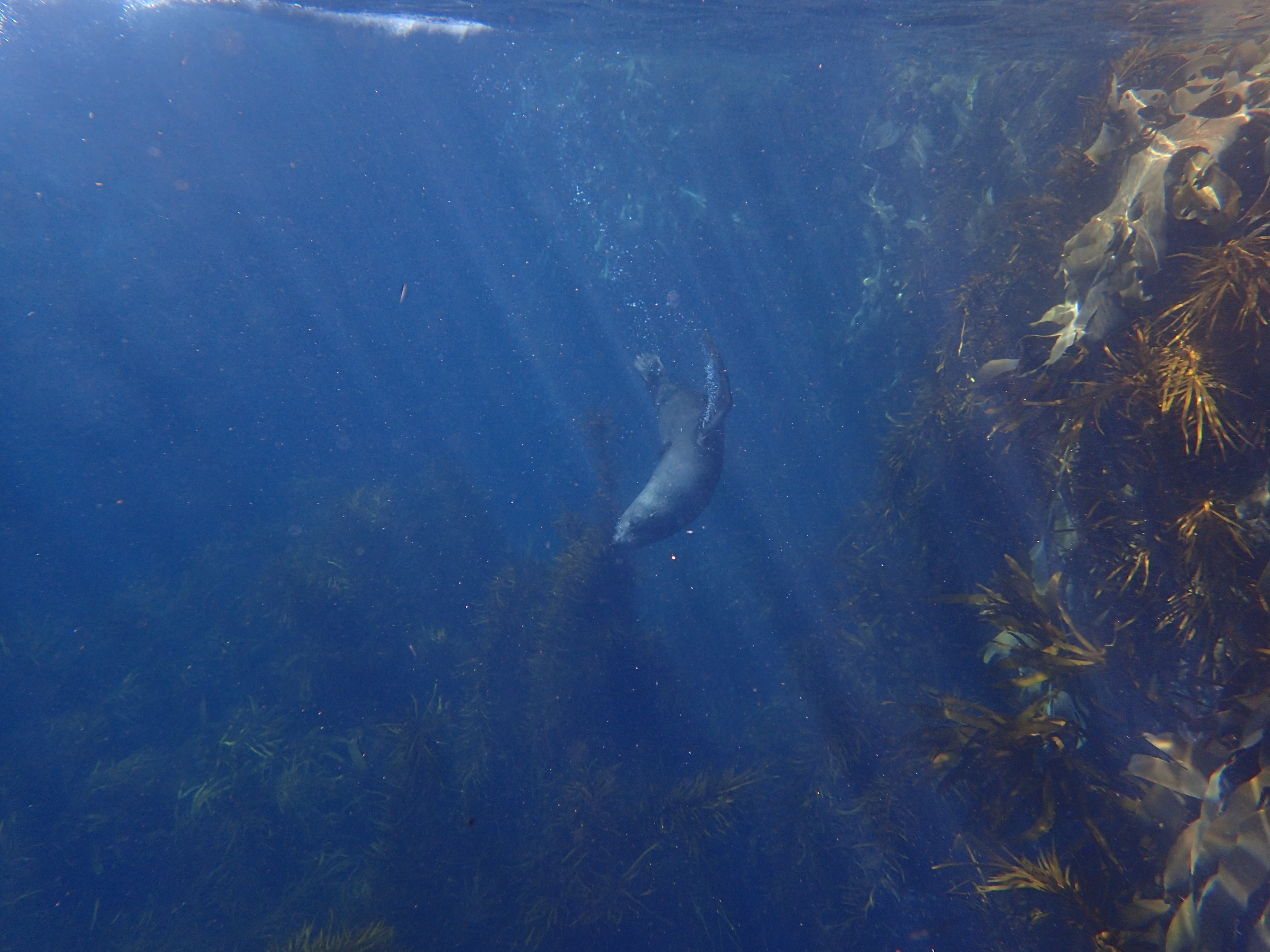 A seal emerging out of the gloom 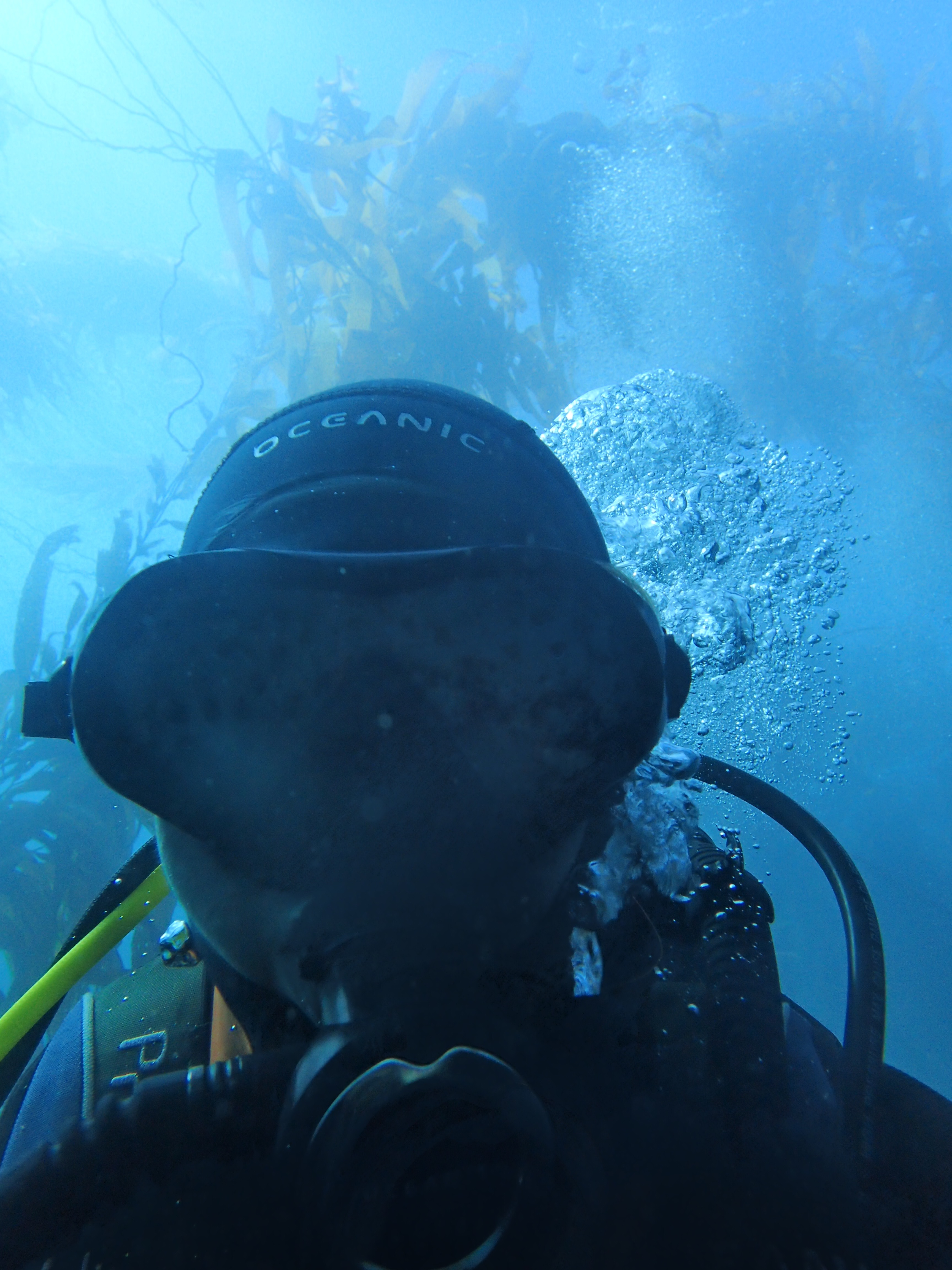 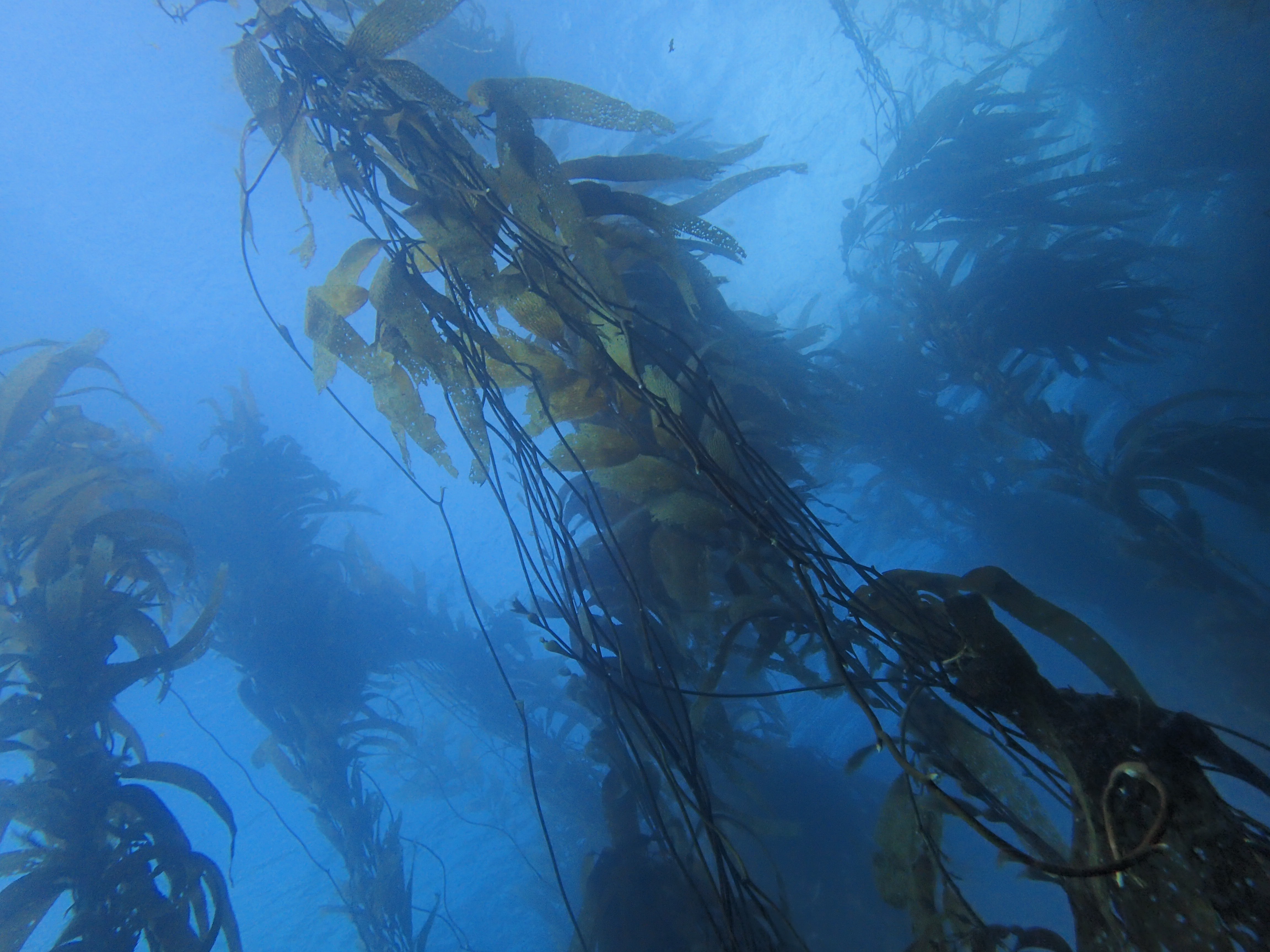 But, unfortunately all good things come to an end and my time in Tas was up! The next day I packed up my bags and headed to the airport ready to make my way back to Brisbane and back to college. (Yay! I finally have somewhere permanent to live again!) And that was that, 100 Days of summer, 5 of the 7 states, 5 flights, 1 train, 1 road trip, 12,000km travelled, 13 dives dived, about and a whole heap of adventure. Australian summer – you did good!