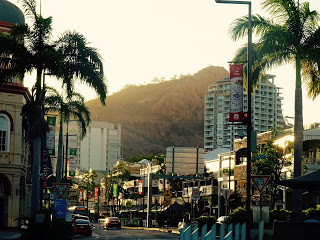 Today was an early start jumping on the train and travelling south for a good few hours, arriving in Townsville at about 3 in the afternoon. I’m no stranger to long train journeys, having to do it 4-6 times a year for Uni, but I have to say it was odd seeing such different landscapes through the window. Australia really is very flat!!

So upon arriving in Townsville I stepped out into the mid afternoon heat (36 degrees and 70% humidity if I remember correctly) and proceeded to walk to the hostel. After all, it was only a fifteen minute walk!

Longest fifteen minute walk of my life! Firstly, it was hot and sticky and my rucksack is stupidly heavy since I don’t know how to pack for 3 months backpacking. Secondly, it was uphill! It was quite cool though as the train station was near the outskirts of town and I got to walk in, seeing the ‘Castle Hill’ rocks looming over everything and seeing the town spread out before me. 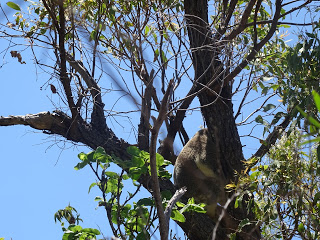 Townsville reminded me a lot of the Wild West towns you see in old westerns, I half expected a guy in cowboy boots to come swaggering down the walkway, or for a whole heap of people to spill out of a tavern mid-brawl. However, although looking like a western, it was quiet and actually very nice to explore. Down at the water front they had a park which was fairly pretty. I also managed to find an ice-cream place which was pretty lush. Jaffa ice-cream!! After sitting on the water front for a while I decided to explore the city a bit more. I have to say, my favourite thing was the big rock looming over everything, no matter where you were in the city. It just looked really cool. 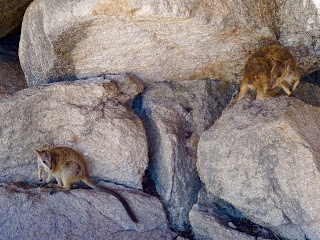 That evening I got take away from the local Chinese before getting an early night as I’d be up very early to go to Magnetic Island – the reason for my stop in this city. The next morning I was up bright and early and on the ferry by seven, getting to the island for just gone 8. First port of call was the backpackers where I could hire a stinger suit and then I went and had a drink on the beach to see in the morning and read my guide book. After a little while on the beach I decided that I wanted to do the fort walk. Apparently the views would be amazing and there would be wild koalas – a must if I’m to spend a year in Australia!!

So after getting the bus I made it to the start of the walk, only to realise there was little shade and the middle of the day was rapidly approaching. So I did what any idiot would do and I decided to power walk it up so I could shelter in the shade at the top and then walk down slowly and appreciate the views and the warmth. And power walk I did and boy was it a bad decision! Good thing they had water taps as I filled up my bottle a few times!

It was really pretty but it was a bit of a climb. When I got to the top of the hill there was a circuit you could do for the forts, so I took off climbing between huge boulders and round the crown of this hill until I got to the fort and the welcome shade and cool it provided. Naturally I waited there for a good long while, soaking in the views and reading about the history before I decided to head back down the hill, taking in the views this time. It was gorgeous. Being on an island and on a hill you could see coast in almost any direction, and when there was no sea there was just vast expanses of forest. 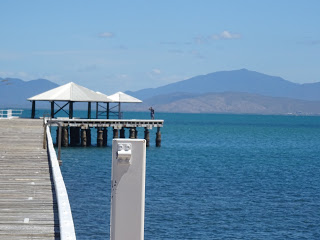 Looking back to the mainland

Near the end of the walk an arrow on the floor caught my eye and lo and behold there was a koala in the tree by the side of the path. The koala wasn’t cooperating very well and was adamant to hide it’s face so I couldn’t get a good picture, but nonetheless I saw one!!! A wild koala!!! I was very excited!

After the walk I hopped back on the bus to the other side of the island where apparently you could find wild rock wallabies. After asking a few people for hints as to where they usually were, I was off in the right direction and, once I’d found the boulder field, I found them! They were a lot smaller than I was expecting, but a lot cuter too. They were so tiny and shy, seeing them bounce around the boulders was really cute. So two wild Aussie animals in one day! Not bad!

Having worn myself out a little I decided to chill on the beach and take a bit of a dip in the water, but the water was so warm! It was a bit weird! I’m used to almost getting hypothermia when I swim, not feeling like it’s a bath! I went round two beaches and chilled on each before heading back to the island hostel to return the stinger suit.

There I happened to bump into two people from my home university who are also in Australia studying, but not at the same Uni as me. It was such a weird coincidence! So after a quick catch up I went back to the beach from the morning and chilled with an ice-cream, waiting for the bus which would take me to the ferry.

On the way back home I was sitting next to this lovely girl on the ferry and we ended up sharing our life stories and getting on pretty well. I probably should have gotten her name, but alas, now she will just be remembered as ‘the nice girl I met on the ferry!’ 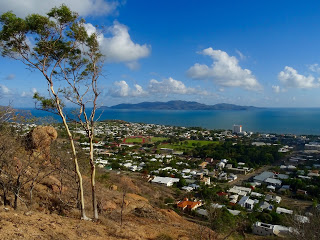 That pretty much brought me to the end of my trip. magnetic island was as gorgeous as I had hoped, delivering on the views, beaches and wildlife, but I had until 3pm to wait for my train. So, bright and early I headed off up the trail that would take me to the top of Castle Hill and the views were incredible. You could see the whole city and the surroundings, it was gorgeous. 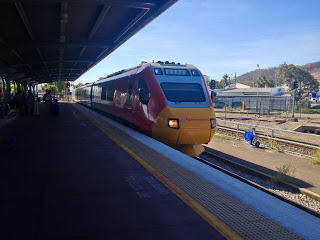 Naturally I had to catch up with my parents so I gave them a quick ring and showed them the views from the top of the almost mountain while I was at it! With the clock ticking over to 8am (yes I left at 6 to walk up the hill) I decided to head down and into the city once more, popping into the reef Hq aquarium for my last few hours. It was really lovely actually, I went for a few talks, went to their turtle rehabilitation centre and generally had a very chilled afternoon. Eventually I had to walk back to the hostel, checking out and catching a lift to the train station so I could jump on the train for Prosperine, which would be the gateway my next destination – Airlie Beach of the Whitsundays. Only a 3 hour train this time!