This weekend has been a few days of luxury before heading off on my solo backpacking adventures! Nice and not-too-early in the morning a friend from college, Nicole, picked me up in Cairns and then we started the drive northwards, stopping at some amazing view points en-route. We stopped off in Port Douglas where we had a quick look around the markets and continued north stopping at  Rex lookout and a few other spots on the way. It was quite cool seeing Snapper Island as it did actually look like a crocodiles head!!

The afternoon was dedicated to the Daintree rainforest. We set off in the car across the river (where I saw my first crocodile warnings in Australia, but alas I didn’t get to see the real thing) before heading of on the singular road going north. It was pretty windy, very warm and incredibly beautiful. The rainforest was stunning. We passed the last gas station for ages and kept going on the only road headed for Cape Tribulation.

On the way we stopped off at several beaches and more lookouts, all whilst spotting snakes and butterflies from the car, hearing the insect choruses and keeping an eye out for cassowaries, which, alas, stayed ever elusive! The insects were super loud though, which was really cool to hear. I think cicadas are rapidly becoming one of my favourite sounds! 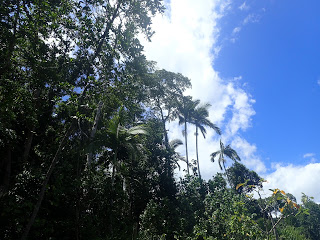 In the jungle the mighty jungle…

I can’t even describe how beautiful the rainforest was, just spending a day in it and watching the scenery go by was stunning. The warm and humid atmosphere made it feel like I really was in a tropical rainforest (which it is) and the butterflies were so colourful and huge!!

The beaches and lookouts were gorgeous. It was so surreal to be in rainforest one second and then a pure white beach the next with crystal blue waters lapping at the shore. Literally a meter between the two! It was quite special, I can understand their advertising slogan of ‘where the rainforest meets the reef’!

It was quite fun just to be able to to go where we wanted and do what we wanted, so after an ice cream at Cape Tribulation we hopped back in the car and headed for Nicole’s house, where I would be staying for the night! I was treated to an incredible BBQ and a melon cocktail whilst sitting in the garden admiring the weird and wonderful fruit trees. I slept amazingly well that night, so a huge thank you to Nicole and her family for having me over! 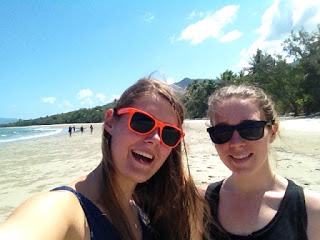 Where the rainforest meets the reef!

The next morning Nicole’s father took us out on his boat up the Daintree River, just looking at the area and trying to spot crocodiles (no luck unfortunately). It was fantastic to see the mouth of the river and to go travelling up into the mangroves, I felt like I was an explorer on an adventure!

That evening after a nice drive back Nicole dropped me back at my hostel in Cairns. I went for a meal and a swim before packing my bags and getting ready to start heading South. My next trip is entirely solo (Aside from the odd day here or there), I have been from Cape Tribulation to Cairns and now I’m headed all the way back down to Brisbane. Thats around 1800km! It’s gonna be a good two weeks!

So here I go then! Step one of my great southern migration – done. 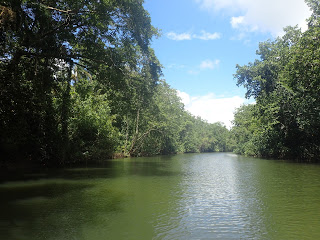 On the Daintree river