100 Days of Summer – The Family Allen Roadtrip – The Glasshouse Mountains

So the next stop on the family Allen road-trip was back on the Sunshine Coast, but a little further inland this time – the Glasshouse mountains! I was very excited about this, as I’d passed them a few times and they looked gorgeous! I’d also learnt a little about how they had formed in classes, so I was super keen to go!

Leaving Hervey Bay fairly early we made it to the mountains for about lunch-time, so we found ourselves a little cafe on a lookout where we had lunch, before heading up to the top of the lookout and inspecting the views – and they were impressive! The 6 mountains were spread out before us and there was a little plaque with the name and story behind each one.

Since it was time for us to check in, we drove back down from the lookout and over to where we would be staying – the Glasshouse Mountains Ecolodge. The Ecolodges were so cool, the kitchen and library were old train carriages and the gardens had a great view of Mount Tibrogargan, as well as lots of metal sculptures of animals, which I quite liked! It was certainly a very unique place! After checking in and having a quick cup of tea we went for a nice evening stroll around the base of Mount Tibrogargan. I think my parents were a bit more thankful for the cooler temperatures on this walk, although it did mean that the mozzies came out to play! After the walk we found our way to the Tavern, the local pub/eatery for Dinner. Schnitzel again! This time I had a satay schnitzel, odd, but quite nice.

Day two was an early start as we wanted to do a walk before it got too hot, so we grabbed breakfast from the bakery, headed to the information centre and then started to make our way up Mount Ngungun. It was a lovely walk, but very very hot towards the end of it. When we reached the top it was near midday and there was little shade. Dad and I mucked around a bit, taking photos near the ‘edge’ of the mountain with the flatlands/Brisbane behind us, while Mum found what little shade she could.

Me and Dad at the top of Mount Ngungun

After that is was back down the mountain for a little chill out before heading up Wild Horse Mountain, after some questionable navigation from yours truly (roads don’t say when they turn into gravel roads on Google, okay!?). We were at Wild Horse Mountain Lookout for sunset, which was really cool, the sun set was gorgeous behind the mountains and it was also cool to see them with the moon up. My parents also found a snake – we think it was a tree snake. It was slithering around the bottom of the lookout tower (we were on the first floor). Mum was very impressed with how fast it was, Dad just wanted a picture.

That was pretty much it. Our visit to the Glasshouse Mountains was short and sweet, but I definitely enjoyed it and would love to go back! 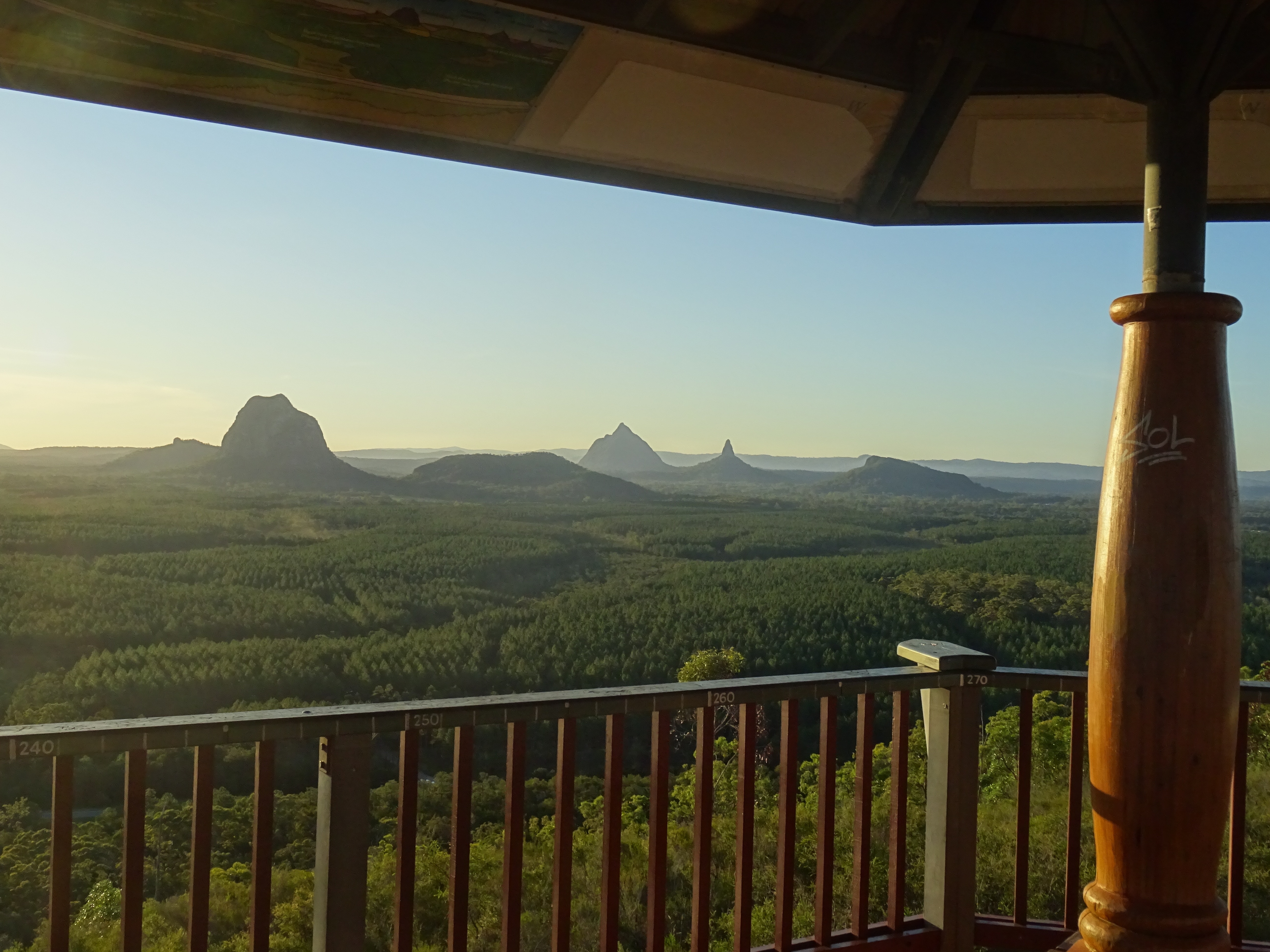 The Glasshouse Mountains from the Wild Horse Mountain Lookout 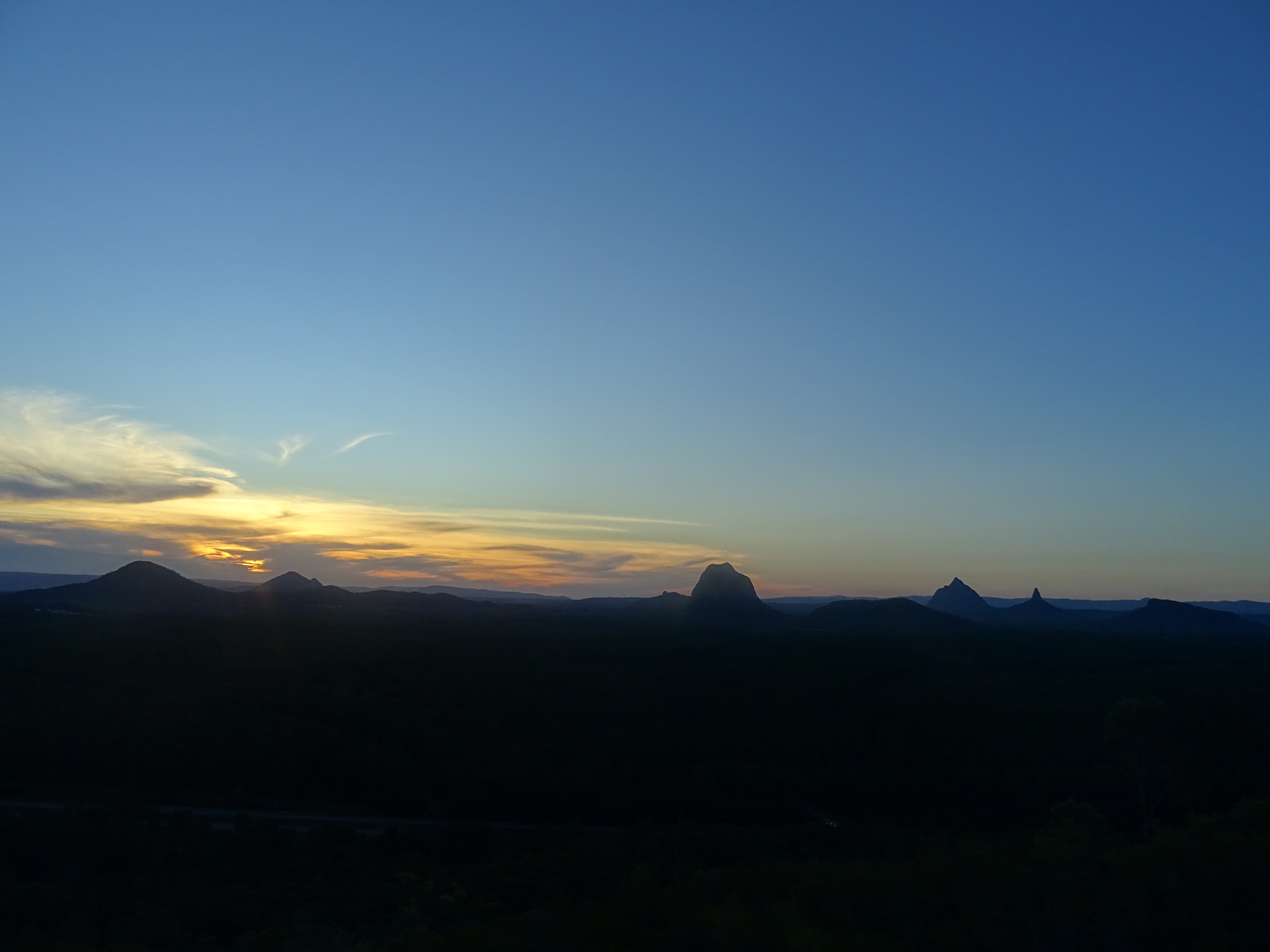 Sunset over the Glasshouse Mountains