Aside from coming to see their lovely daughter, I feel like coming to Fraser Island was one of the main aims of my parents’ holiday to Australia. Especially since that is my Dads name too! So after visiting the Sunshine Coast Hinterland and the waterfalls we carried on up the road, past the big kangaroo and the giant Ned Kelly and onwards up to Hervey Bay. Hervey Bay was hilarious as this was possibly the least urbanised place we’d stayed at so far and Mum decided that there was too much wildlife – “Shut that door!”. There were kookaburras singing in the trees, a preying mantis near the door and geckos everywhere. Mum didn’t want them in the room, but after pointing out that a) they’re hard to get rid of and b) they eat the other nasties she was a lot more accommodating! That evening we went to the motel diner for dinner and I had kangaroo for the first time! A little shameful since I’ve been in the country for five and a bit months, but better late than never! Wasn’t a huge fan, I must admit. I mean, it was edible, but not something I’d opt to eat every day! 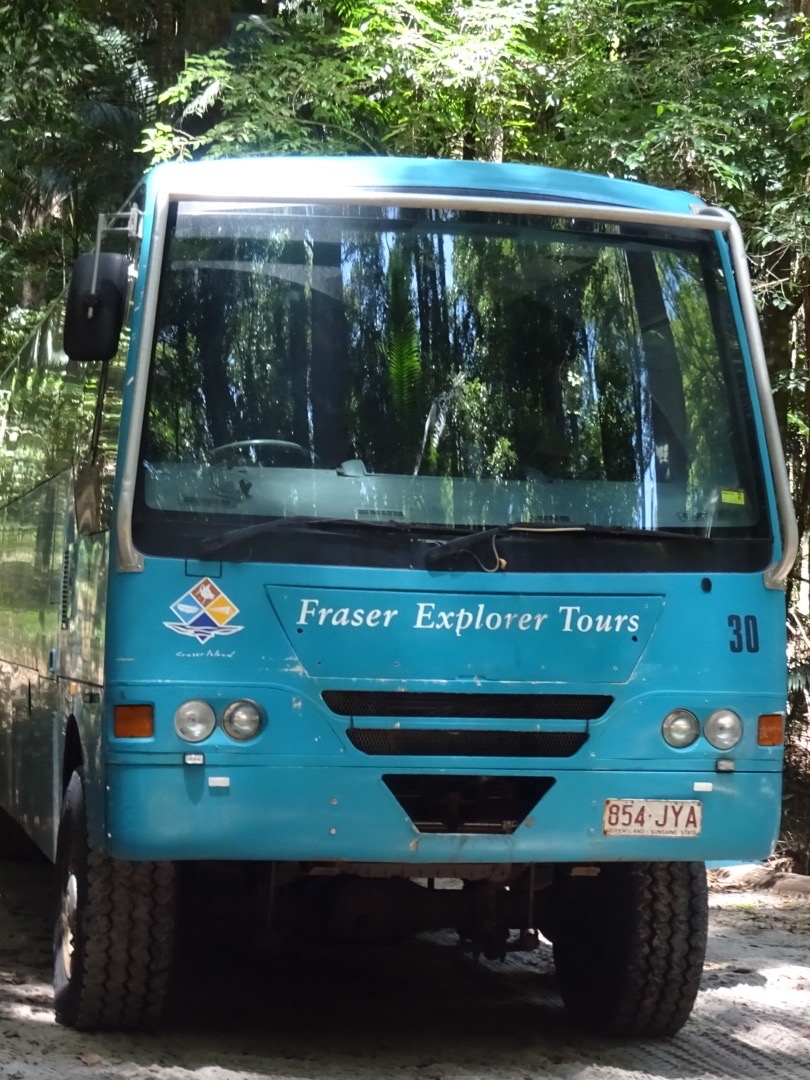 Bright and early the next morning we were up and ready to go to Fraser Island. We got picked up by a coach, dropped off at the ferry stop and then got the ferry across to the island. The ferry journey across was quite pleasant, although we saw a sea snake which was pretty cool and then an unidentified organism. The votes are for a crab, turtle or a platypus – it swam quite bizarrely and was brown as far as I could tell, so I have no clue. It may well have been a platypus, that’s what it looked most like to me, but with it so far away and the ferry on the move it was hard to tell!

Once on the island the adventure began. It was good to be back and to be able to do the touristy things with no worries about needing to get data for an assessment later on! As we stepped off the ferry we were met by our bus driver, a lovely guy named Butch (mum kept calling him Bruce) who would be our guide for the next two days! Nabbing ourselves window seats we set off for the first stop, Lake Mackenzie! It’s as just as gorgeous as I remembered it being, but no baby turtles this time! Dad and I went for a swim, and then we just chilled on the beach for a bit before we piled back on the bus, heading for central station and a walk through Pile valley and Wanggoolba creek. 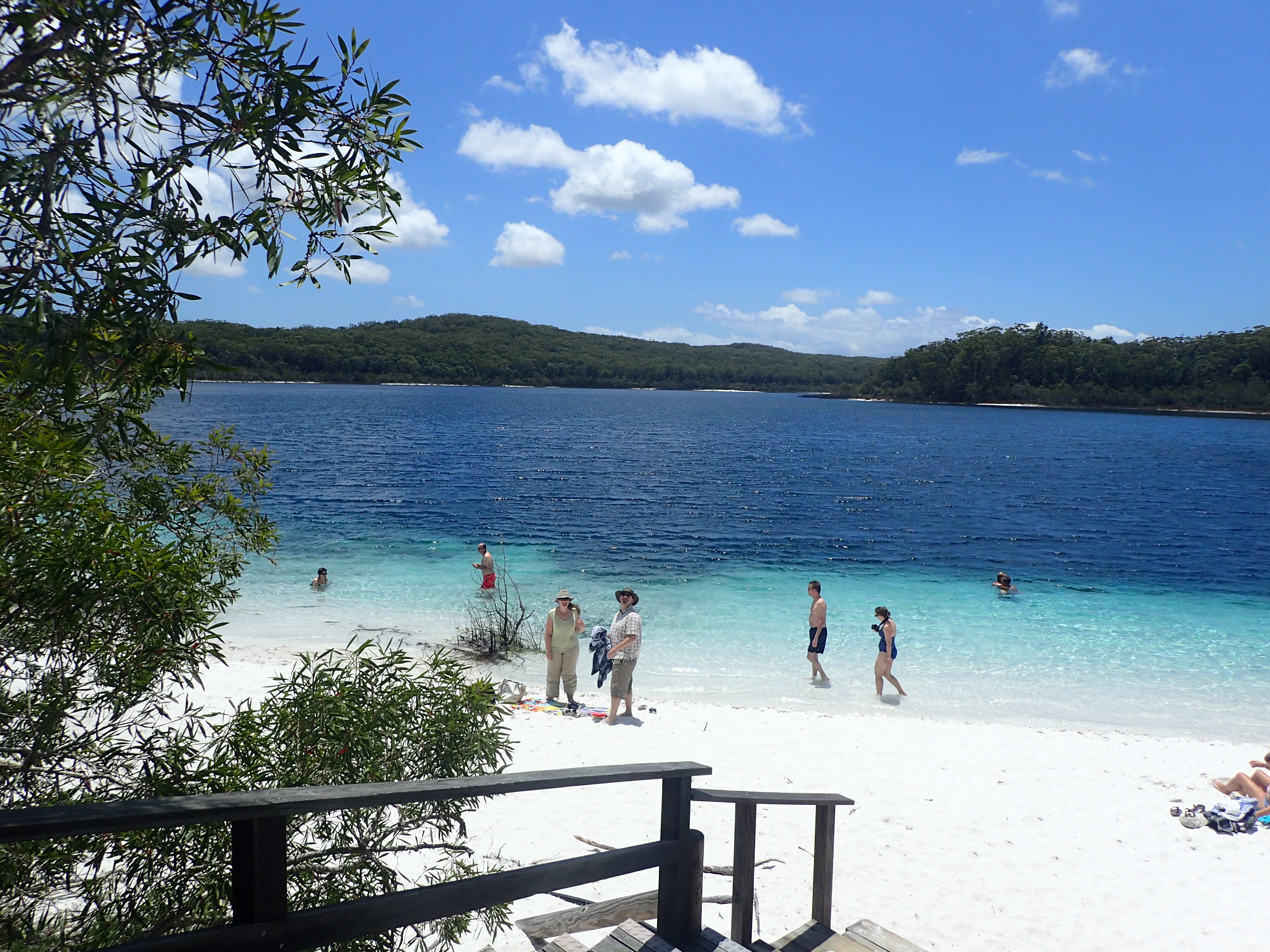 Mum and Dad at Lake Mackenzie

This was a beautiful as I remembered, and we even ate some wild pepper – boy was that spicy! After a pleasant meander through the rainforest we were back on the bus and headed for Eurong and Lake Wabby. I remember doing this walk last time I was on the Island – I was hot, sweaty and tired, but this time I’d acclimatised and I found the walk a lot easier! No goannas this time though which was a bit of a shame! I don’t think mum coped too well with the heat, especially since there was no shelter from the sun up on the sand blow, but we had a paddle and took a few photos of the desert/Tatooine-esque landscape before meandering back down the sand-dune to the bus. After Lake Wabby it was off to the Eurong Resort to get our room for the night and have some dinner. 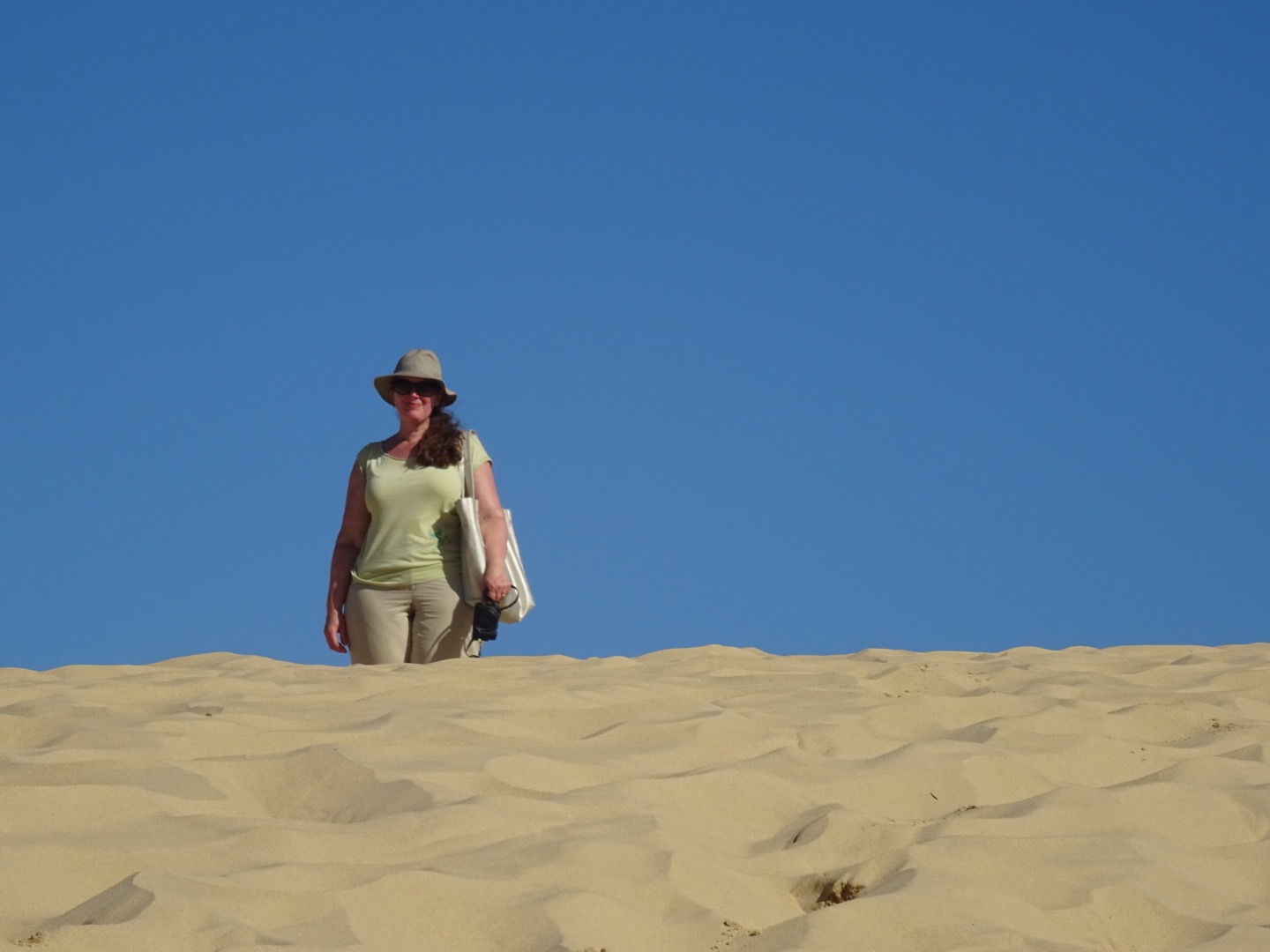 Mum up on the dunes by Lake Wabby

The food was pretty good, and afterwards we went for a drink at the bar with a few people from our tour. Once it got a little later Dad headed off to the beach with his camera to take some photos of the stars, since there was little light pollution on the island! It was quite special, a little nerve wracking seeing the 4x4s race past in the dark, but it was gorgeous. Dad even taught me how to set up my camera to get star pictures, but I need a tripod and some more practice before I’m any good!

Day Two on Fraser Island was excellent! We were up early with a fry-up prepped for us in the dining hall before we were back on the bus, but only for a few minutes as Dad and I went on a plane! Long story short there is a company that does short flight tours over Fraser Island, taking off and landing on the main beach itself. Mum didn’t want to go up in the plane, but I went with Dad and it was so gorgeous. 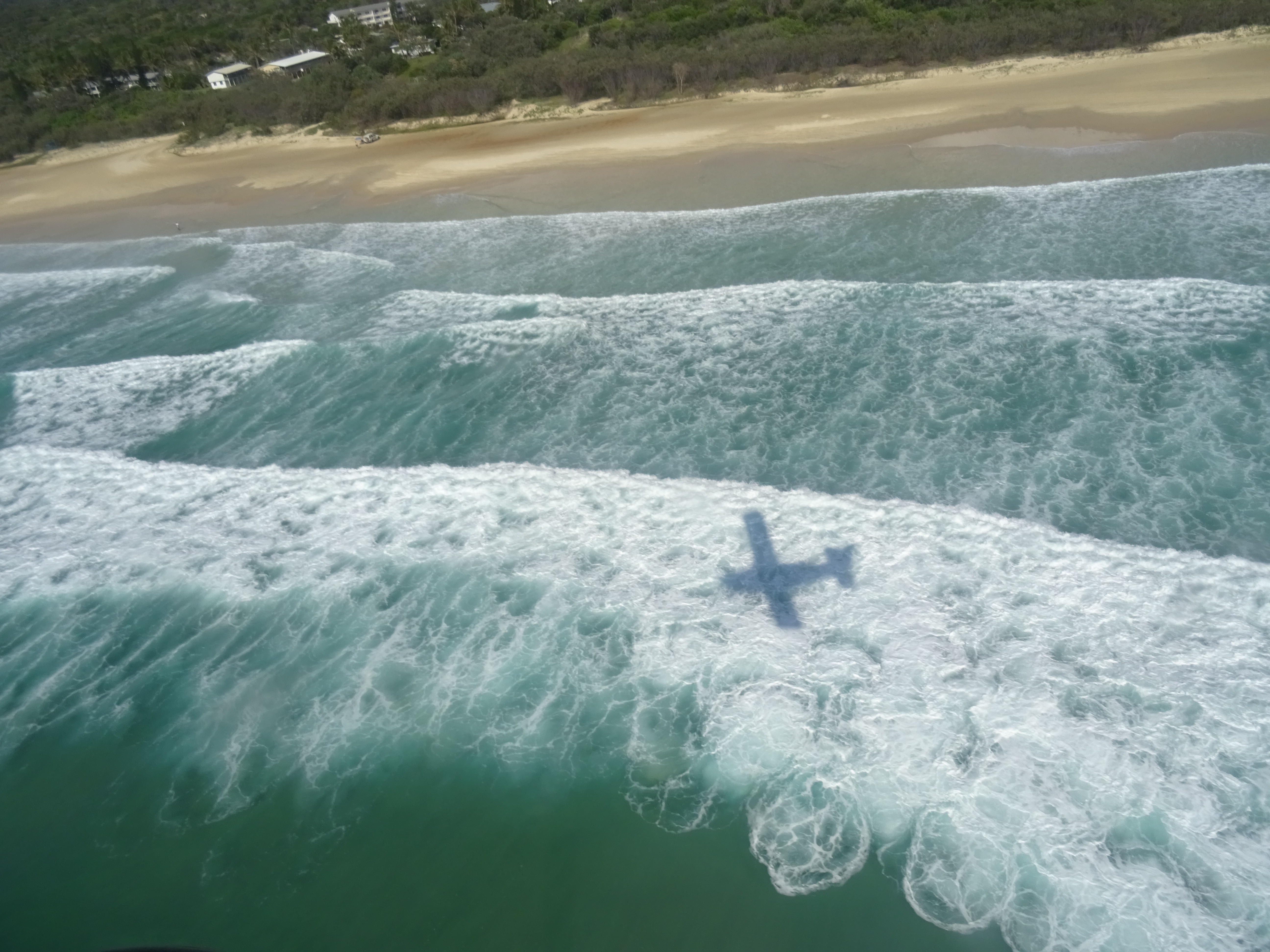 Up in the sky 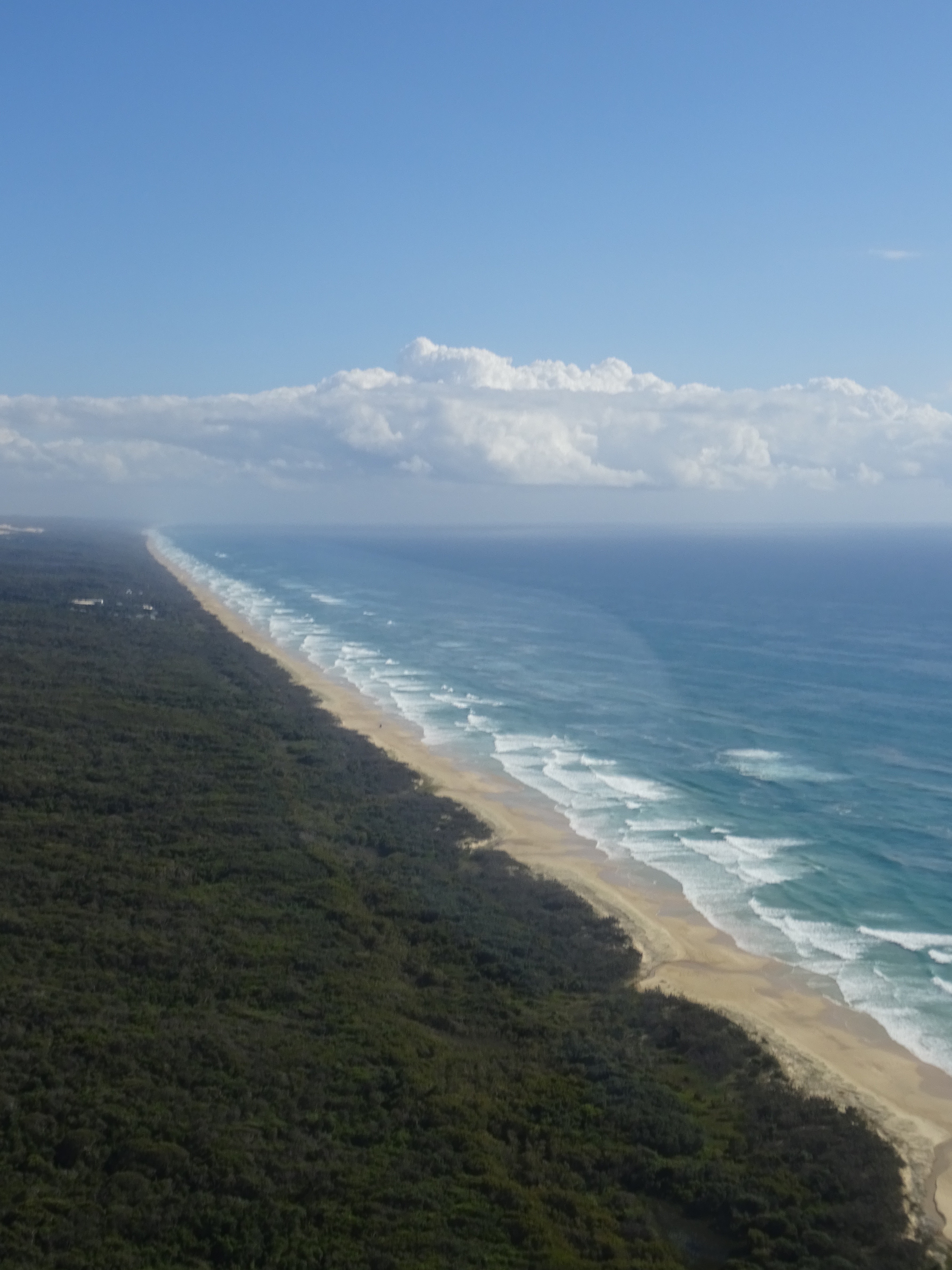 75 Mile Beach. I can certainly believe that it’s that long!

Being able to see the lakes from the air, the incredible stretch of sand that was 75 Mile Beach and the rainforest… it was something else. It was truly special to be able to see all that from the air. After our flight we rejoined the bus a little further up the beach to visit the Pinnacles and the Maheno Shipwreck. The Pinnacles were pretty cool, lots of different colours, but the shipwreck was incredible. Especially since apparently most of it is now beneath the sand! It was a great laugh trying to get a good photo in front of it without getting soaked by the waves that came barrelling over the wreck!

We also stumbled upon a Sea Snake on the beach. Keeping a healthy distance away from it we watched it for a little while. Our tour guide mentioned that snakes only really come up onto the beach when their injured and/or dying… at which point the snake fairly promptly rolled over and died. It was sad to see, but quite nice that we did actually get to see a real live sea snake, if only for a few minutes! 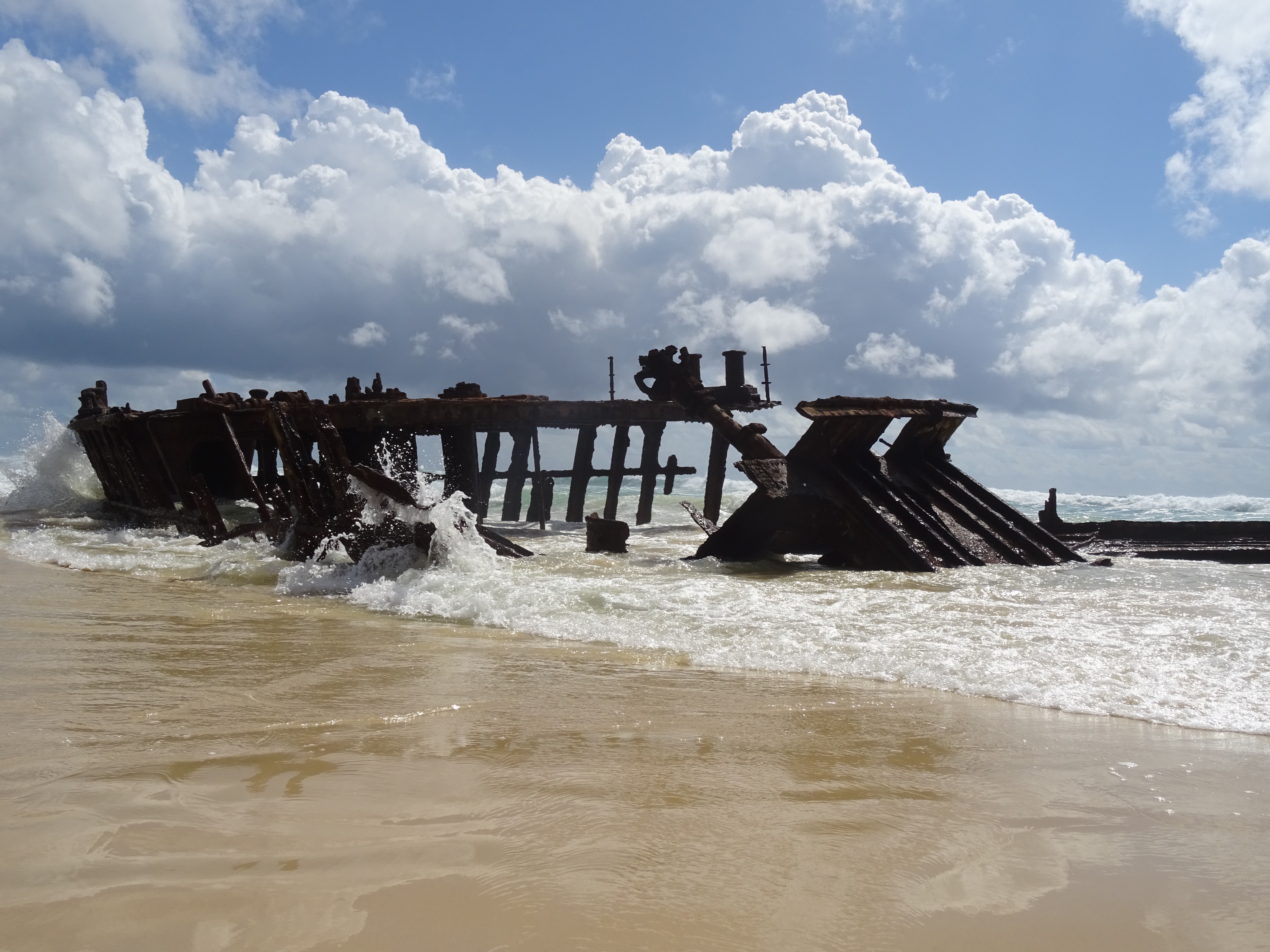 Next stop was Indian Head, where we climbed up the headland to look down 75 Mile Beach and see what we could spot in the water. Whilst on the headland you could see through the water quite well, it being pretty clear. As zoologists go, I was fairly unprepared on this trip! No binoculars and no super zoom camera on me, so my ID skills were not fantastic – but we definitely saw either a big eagle ray or a small manta and some very large fish (I reckon they were too small to be sharks). Up and over Indian Head was the Champagne Pools, rock pools where the waves came up and over the rocks and trickled into the rock-pools behind like the fizz on a freshly popped bottle of champagne. It was nice, but I didn’t much fancy a swim as it was so crowded!

The last stop on our tour was Eli Creek, a freshwater stream that ran out of the forest and over the beach to the sea. We had a right laugh here floating down the river on rubber rings that the tour-guide had stashed under his bus. Dad couldn’t balance very well, which was hilarious, but steering them without bashing into the banks was pretty hard, so I can’t mock him too much! 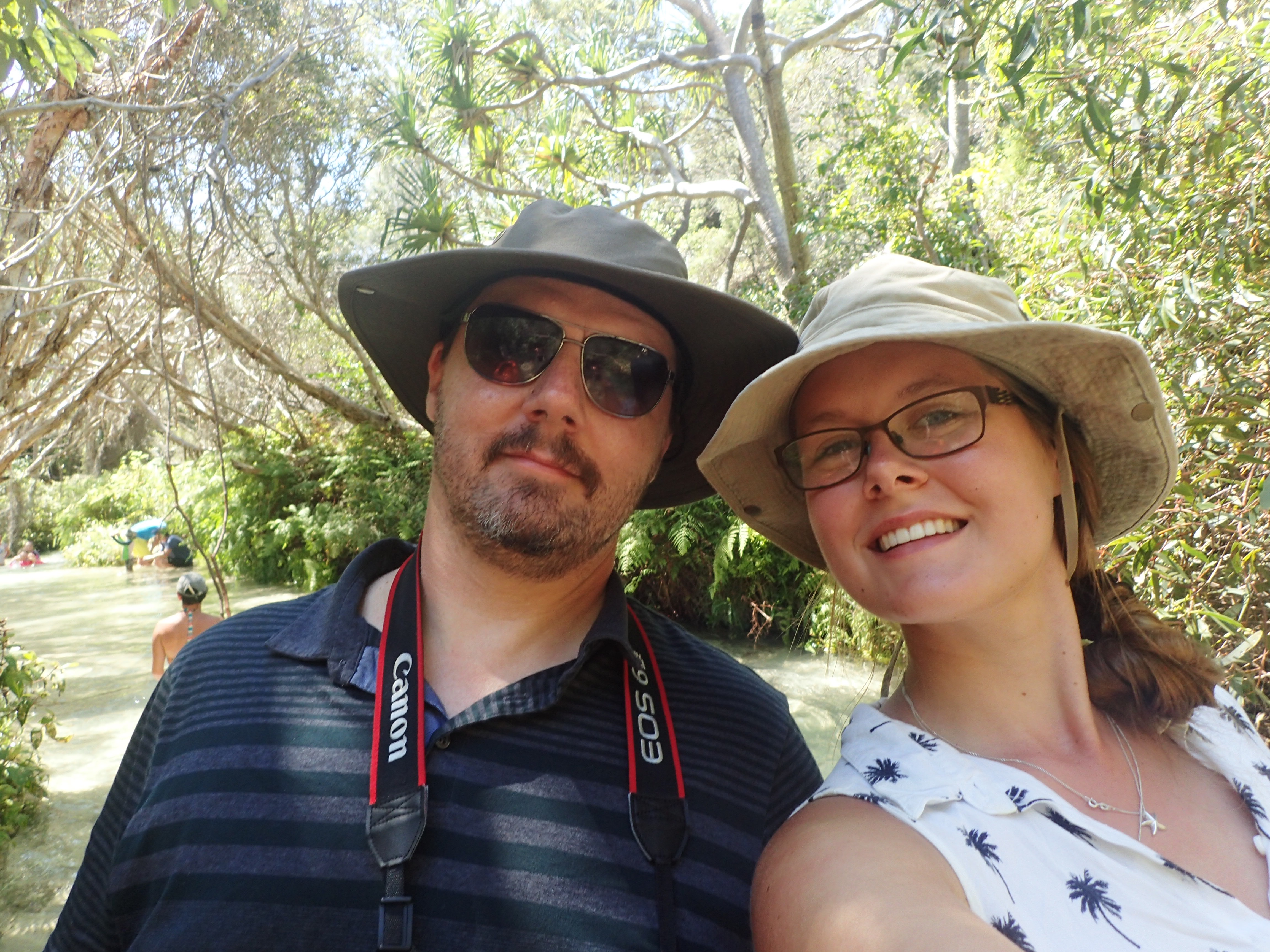 Dad and I going for a walk down the creek 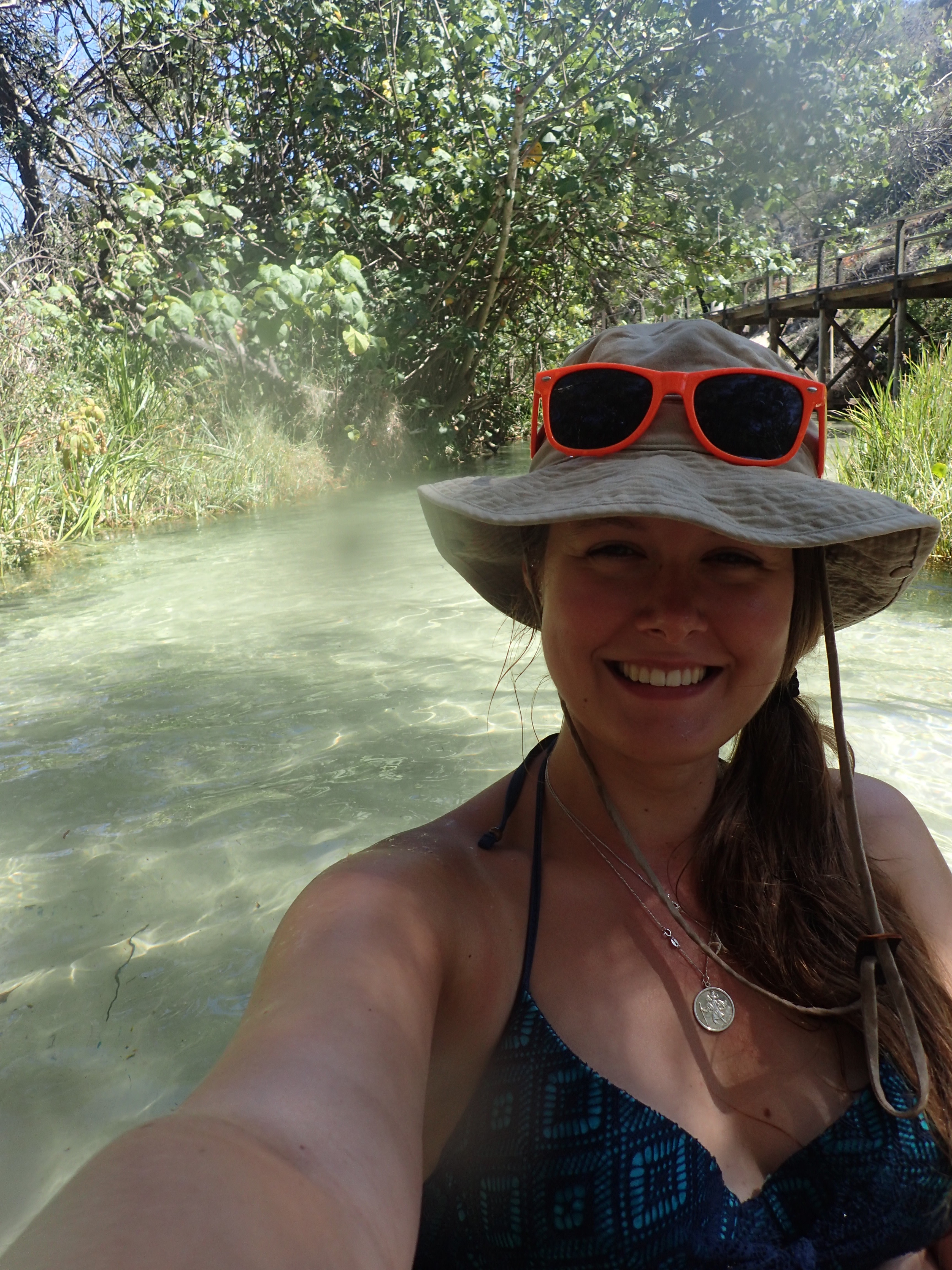 Floating down the creek

After a quick visit to the gift shop we were back on the ferry and headed back to Hervey Bay. This time we saw flying fish, so the ferry proved fairly lucrative in terms of cool animals being spotted! Alas, no dolphins this trip!

Once back at our room in Hervey Bay we went for dinner at the Motel diner again, eating outside this time. It was brilliant as mum fell in love with the fresh water turtles swimming around the pond. It was especially cute when they tried to get out at an area which was too steep, so they ended up falling back into the pond! We were also treated to a fly-over by thousands and thousands of bats. The sky was just full of them! It was something truly special to see. I also saw my first wild black swan on the lake near the diner, so I was a happy bunny! 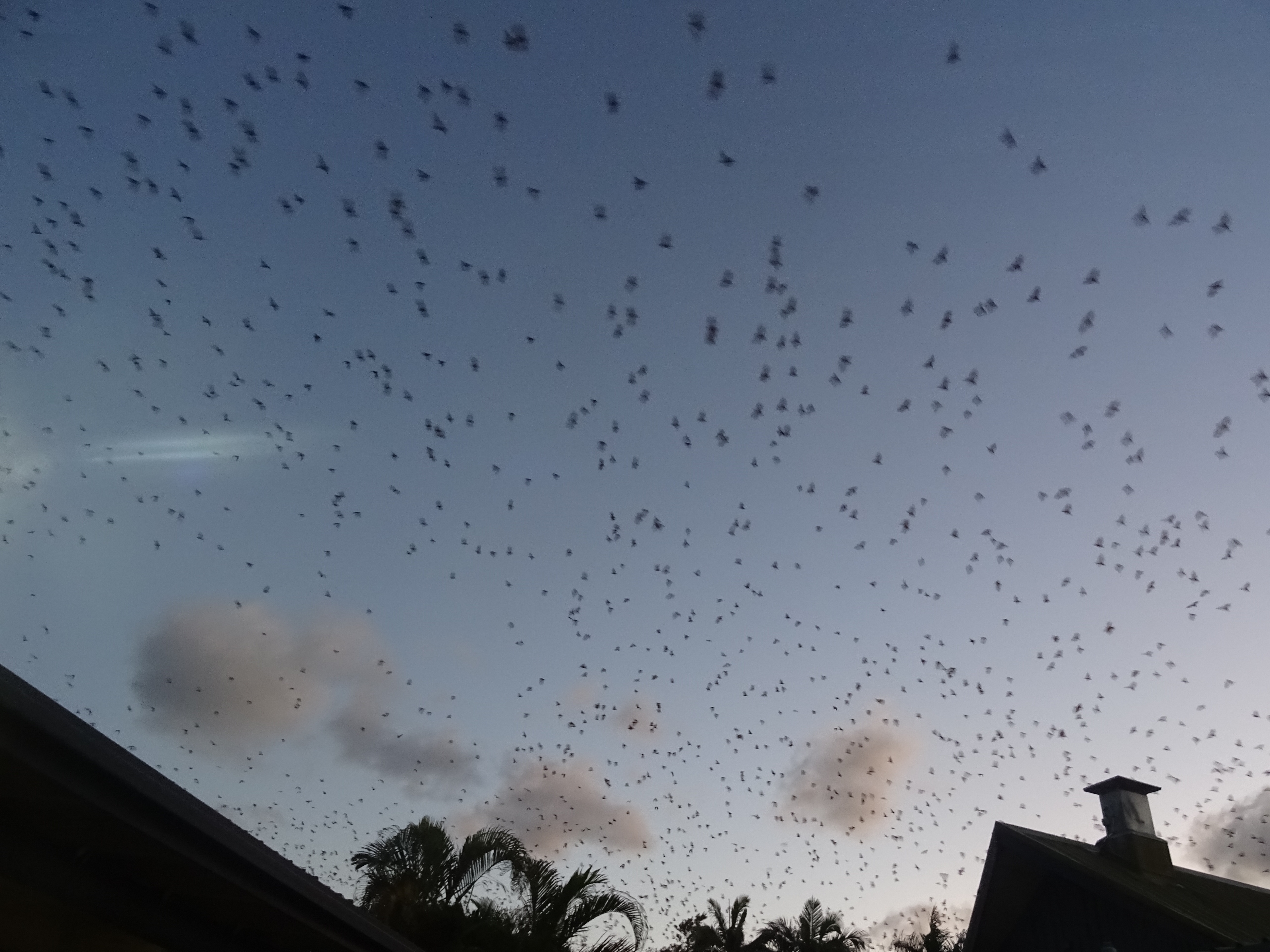 And that was pretty much it! The tour was certainly a whirlwind, but it was brilliant. We had just enough time at each location and the tour guide was great. Hervey bay was also great for all the animals we got to see, and the lake was fairly gorgeous so walking around there in the morning before we left was great, seeing the swan and the moorhens and the ibis! I’m super glad I got to go back, I saw the touristy and the sciencey side of Fraser Island and I saw a lot more touristy wise this trip then I did in my first venture to the island! All in all – a fabulous few days! 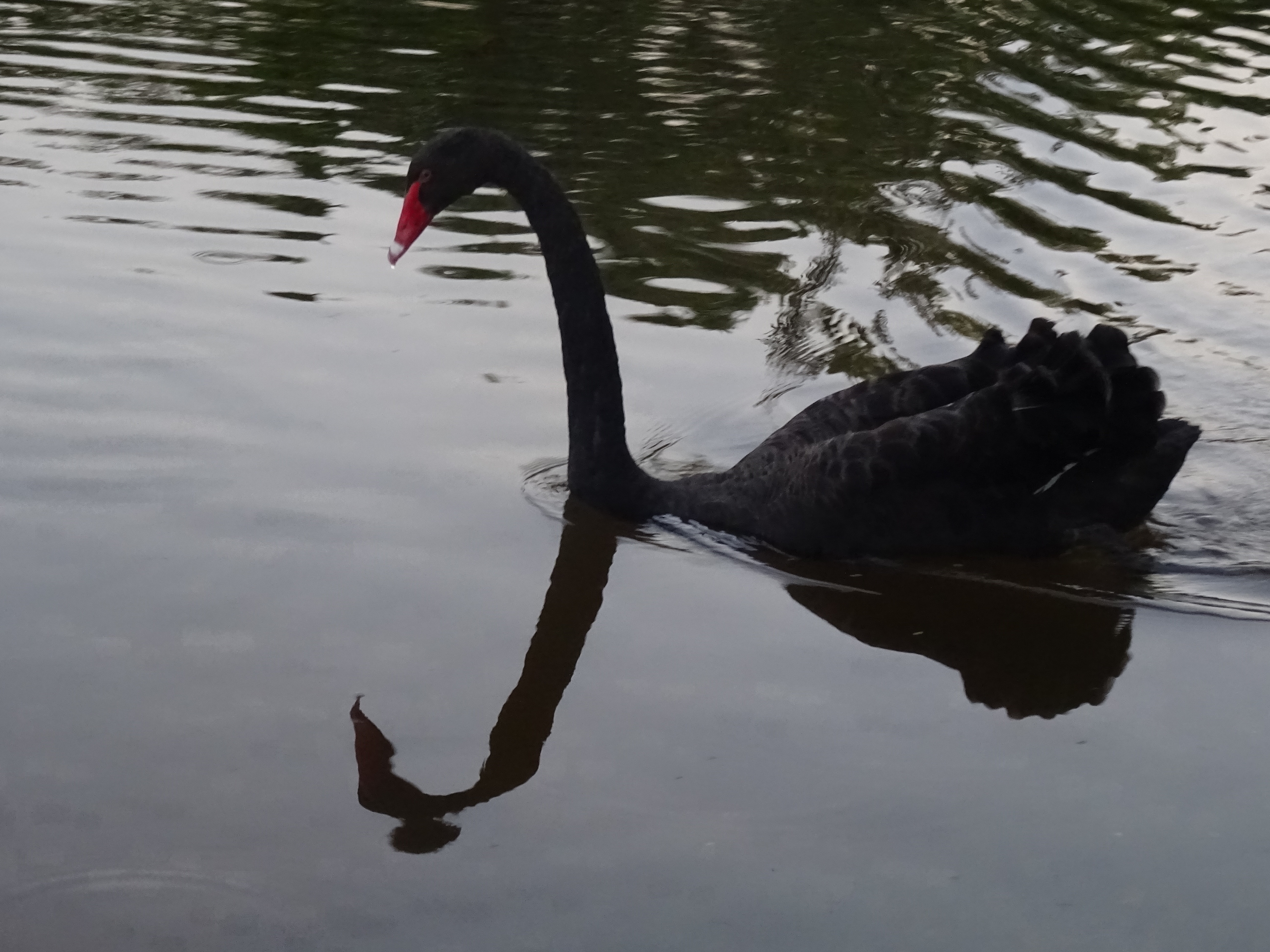