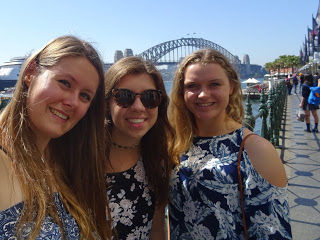 So, Sydney! That’s once place checked off the bucket list and the first of many places I’m going to get to explore this summer! I think blog posts are going to be a bit sketchy over the next few months, I’ll try and do a post after each trip, but I make no promises! It definitely won’t be one every Thursday though!

Sydney then! Sydney was incredible, but at the same time, totally not what I was expecting. I think I’m used to London being the ‘go to city’, which is a confusing, old and rambling city, and Sydney felt very new and busy and shiny and glassy! I made the trip with Emily and Lilia, and it was all very exciting. My first self led holiday/adventure in Australia! Also my first travelling holiday, normally it’s Cornwall, school trips or going somewhere to chill with friends. This is the start of three months travelling and I am very excited/nervous to see if I like it… I guess I’ll let you know the verdict in a few months! 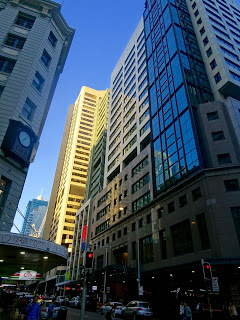 The flights were quite early so we got into Sydney at around midday and headed to the hostel to dump our bags before exploring the city. First port of call was Circular Quay and the Stydney Opera House!! 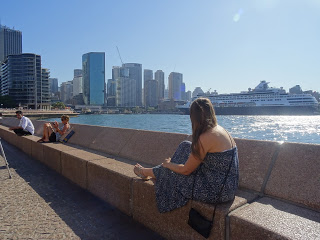 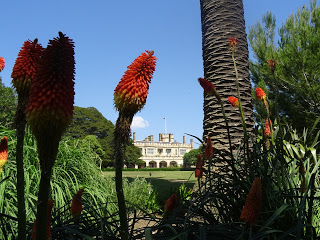 The opera house is such an iconic land mark I was a little bit stunned to be actually seeing it. It was certainly rather impressive! And you could see the harbour bridge across the water too! It was really nice to be back on the coast again, I’d missed that, living in Brisbane!! After posing for the obligatory 100 photos we headed back to the hostel to check in and moved into our room. That evening saw us visiting the Sydney Tower eye and then that was pretty much us done for the day. We just needed to sleep!

The next day was full of gardens and museums and art galleries. You could see the Opera house from the gardens, which was incredible, and there were plenty of galleries and museums to keep us amused! It was all gorgeous, and very interesting, but my gosh my feet hurt! And apparently it was 41 degrees! Emily and I had to admit defeat and rest in the hostel for a little while (and recharge our devices) before heading out to the lighting of the Christmas tree in one of the squares. It was beautiful, but really weird. There were fireworks and carols being sung and people in hats and even a Santa Claus, but it was just too warm to feel Christmassy! I shouldn’t be in shorts and a tank top! It was also weird because I haven’t really considered Christmas yet. Before then I still have so much travelling to do and I’m not going to be with my family and I don’t actually know who’s going to be here, or even where I’ll be living, so it’ll be an interesting holiday to say the least!! 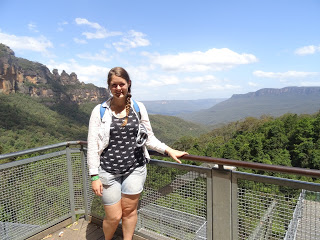 Possibly my favourite thing we did in Sydney was visiting the blue mountains (See above picture). I am 100% not a city girl, so even spending two days in the city was a bit exhausting, so it was nice to go to the quiet openness of outside and wander in the wilderness for a day! The blue mountains were fabulous though. The three of us did a tour and saw the Three Sisters rock formation. There were beautiful views, waterfalls, lyre birds in the rainforest and we had great cakes in a little bakery in one of the towns. We went to this place called Scenic World where we got a cable car across a canyon, seeing the waterfall and trees beneath us through the glass (very weird, I think mum would have hated it). Then we went down into the canyon in a second cable car, walking around the forest below for a little while before taking a train up to the top again.

Now, we need to talk about this train. I have been to Hastings and Lynmouth, I am good with steep cliff trains. But this was something else. Apparently it was the steepest track in the world, and I have to say, I might be inclined to believe them! The normal track was at 52 degrees, but you could adjust your seat to be more or less angled. Naturally we chose more, meaning our seats were at 64 degrees, which was just nuts. And the train went backwards so you couldn’t see what was coming!! It was great fun, the three of us basically had to brace ourselves against the chairs in front of us and the ceiling and watched as the ground disappeared beneath our feet in a very steep ascent. They even played the Indiana Jones theme tune as the train went which was hilarious. It was terrifying, but so much fun!! 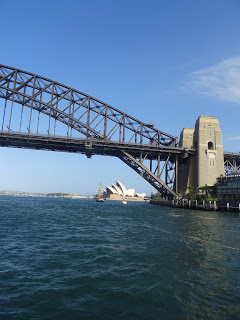 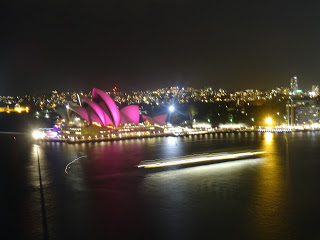 The Opera House and Harbour as seen from the Harbour Bridge 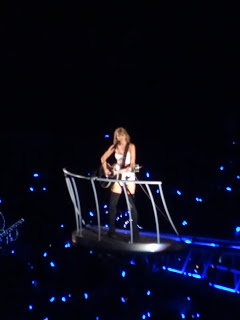 A blurry picture of Taylor Swift

After our trip around the mountains we took a cruise back down the river to the city, and it was great fun as we got to go under the harbour bridge and past loads of buildings which had different interesting histories, and apparently we passed the house where they filmed some of the Great Gatsby!

As if we hadn’t already done enough that day we then hit the market stalls at the Rocks, before heading up onto the bridge just after sunset. Firstly, that bridge is really long, it takes ages to walk across, but the views were incredible! The city and the opera house were all lit up and it was gorgeous! I was in my element taking photos (like father like daughter), but most of them were pretty blurry. I might have to invest in a mini tripod or a beanbag or something. How else am I to do cool long exposure shots?! 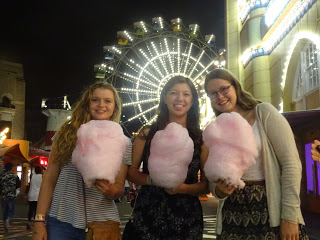 So much candy floss!

Once we were off the bridge we headed to Luna Park, an amusement park on the waters edge. It was quite late, so we only went on two rides, but it was so much fun. We went on the Ferris wheel and the Mouse Trap rides, which were both great. However as my cart was going up the slope in the tracks for the first time a loose screw rolled out of the foot space at the front and hit my foot, so I spent the rest of the ride a little nervous that I’d be flung out at any corner. I did survive, and it was totally worth it to see the operators face when I just handed them the screw. Quite funny!! We then got some of the worlds biggest candy floss (larger than my head) before heading back home.

Another highlight of the trip was seeing Taylor Swift in concert. Now, I quite liked Taylor Swift before hand, however it was very mood dependant. Sometimes I loved her music, and sometimes I couldn’t stand it. However, seeing her in concert and hearing different, newer versions of her older songs was so great. It was a brilliant concert and I had such an amazing time. It is also pretty cool to be able to say that not only did I go to a concert in Australia, but I went to one in Sydney!!

Surfers at Bondi, the headland walk and posing on the beach. (Yes it was a bit windy) 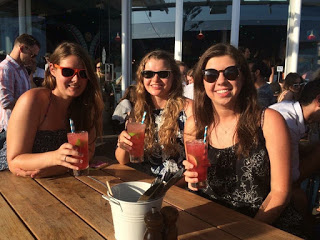 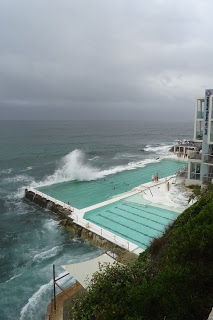 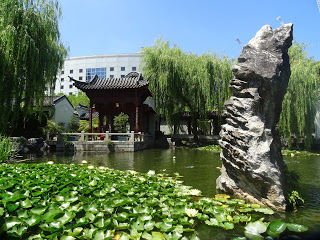 Emily also had her 21st while we were in Sydney (happy birthday Emily!) so we decided to have a day on the beach, specifically Bondi Beach!

The weather was a bit grey and grim in the morning, so we wandered around the headland to the next bay and watched people surf. We even saw a few dolphins out from the headland!

By the time we were making our way back the weather had cleared up, so we took a dip in the iceberg pools (the name is true, the water was freezing!) and then had cocktails at a beach bar before sunbathing for a bit. We also had Thai food followed by Ben and Jerry’s for dinner, so I think it was a good day in all!!

The Chinese Gardens of Friendship were one of the last places we visited, and they were gorgeous. It was pretty surreal to have such a gorgeous and quiet place with waterfalls and trees everywhere, only to turn around and see these big glass sky scrapers. I think that was what I liked most about it, the contrast!

After leaving the gardens we made one last trip to the Opera a House for a few more photos to say goodbye, then it as was on the train to the next part of our journey. Lilia and Emily were off to New Zealand, and I was off to Cairns, so we were headed for different terminals! Saying goodbye on the train was really sad, as who knows when we’ll see each other again! But hopefully we’ll stay in touch and see each other soon! 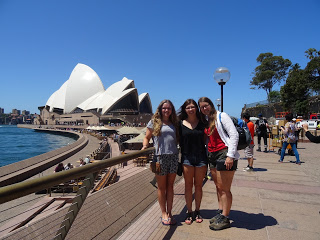 Goodbye to the Opera House and my two travelling partners!

Once we’d had big hugs goodbye I jumped off the train and that was it. Sydney was over and it was time for me to head to Cairns. All by myself.

This will not only be my first solo flight, but it will also be my first time travelling alone and also being truly alone with no friends or family for two weeks once I leave Cairns and start traveling South! I am excited though, I can’t wait to go south and see what the East coast has to offer. 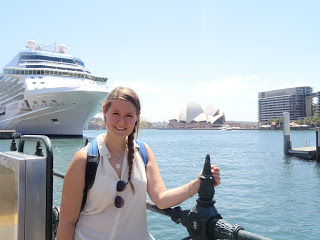