Field Bahamas Day 3 – And so it begins (well, the science does)

And so it begins! I feel like today was the proper start of #FieldBahamas, as today was the first day we got to science. And yes I am using that as a verb.

This morning we had a deep-sea session, run by one of the researchers at CEI, Mackey Violich. The original plan had been for us to go out on the boats and see how she got her samples, but unfortunately the weather was still a little rough. However, not to be beaten by a little bit of wind we took to the labs where Mackey talked us through deep-sea ecology and sampling, before bringing out some samples for us to look at. She had a few organisms from her samples that we were going to look at the gut contents of, which was actually pretty cool. We looked at these giant isopods (Bathynomus) and an eel, which was pretty cool. We didn’t do the gut contents of the eel, as she only has the one, but we all had a go at dissecting the Bathynomus, and removing the stomach contents – they’re mostly stomach! Literally half of their weight vanished with the stomach contents removed! 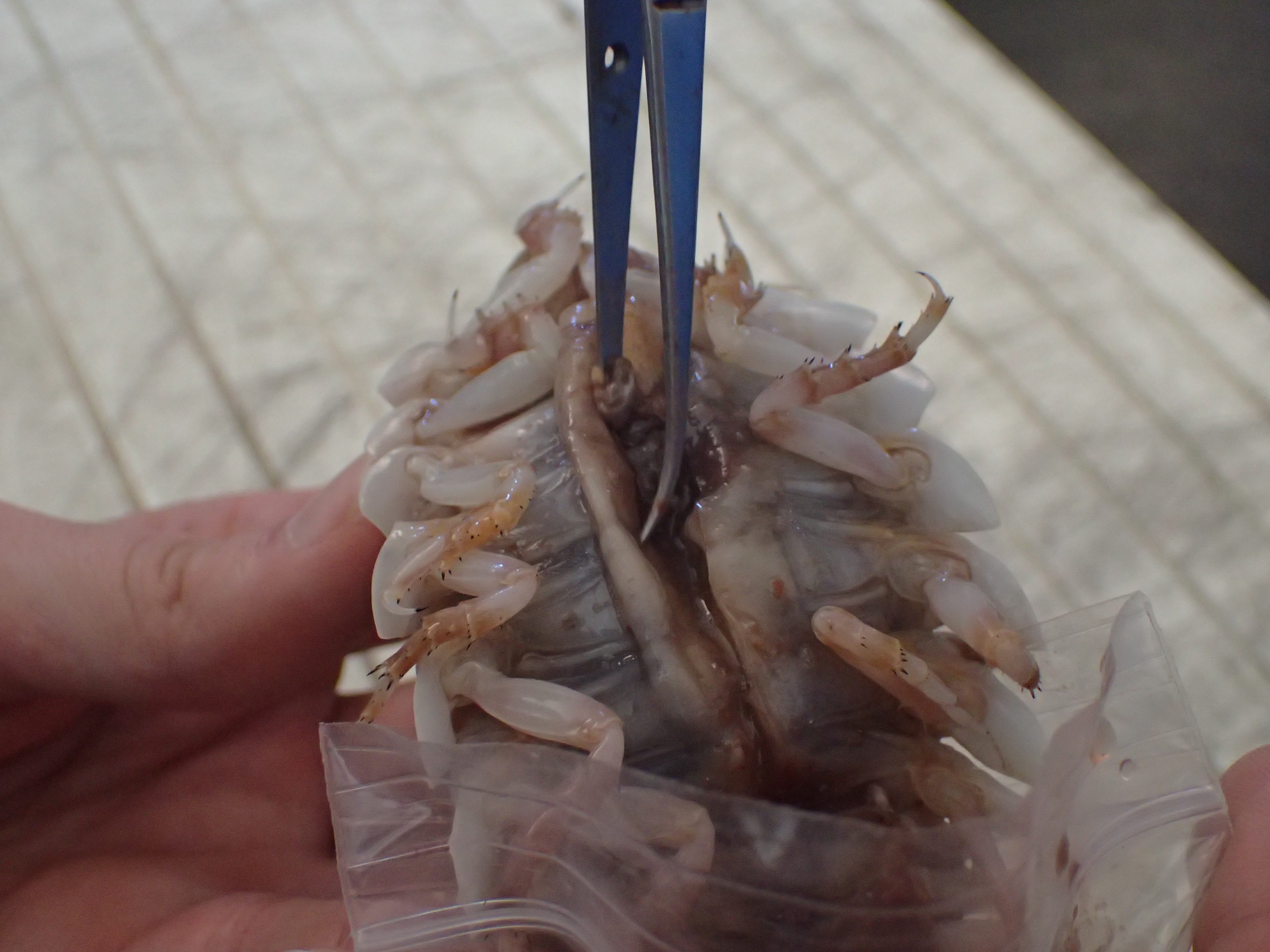 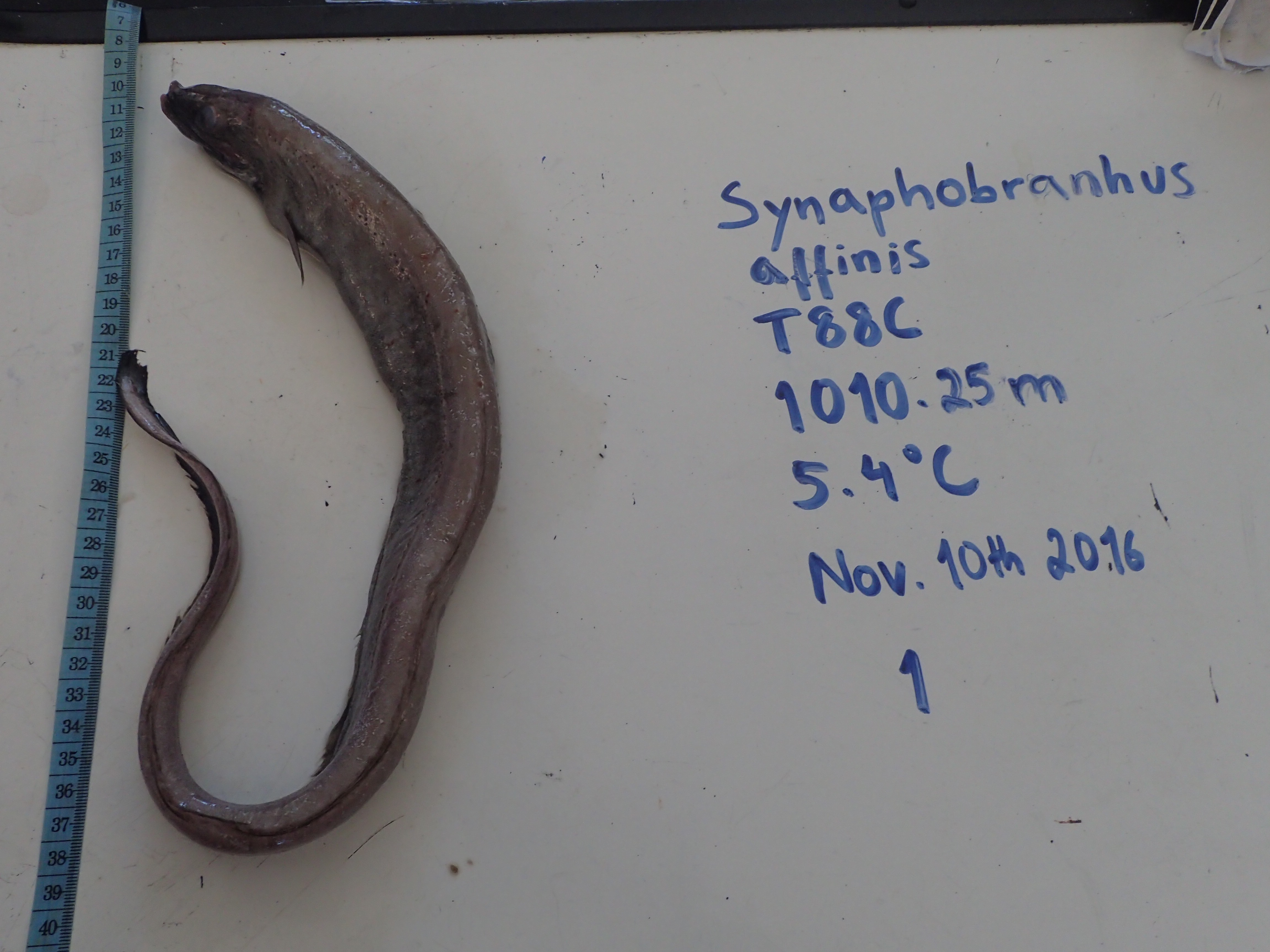 Cut-throat eel from the deep, ready to be dissected

After that we headed down island for the afternoon, about 45minutes away from the CEI, to the Ocean Hole, a hole in the island that is connected to the ocean by a cave network, and so rises and falls with the tides. Apparently it is 180m deep, which was a little unnerving!

At the Ocean Hole we started learning how to ID the fish that we could see. We saw blue tang (the caribbean kind, very different from the Finding Nemo/Indo-pacific variety!), pork fish, grey angelfish, sargent major and many more species – but they were the cool ones! We then spent a little time mucking around and having fun jumping into the water before we headed back to the campus to get clean and dry before dinner. 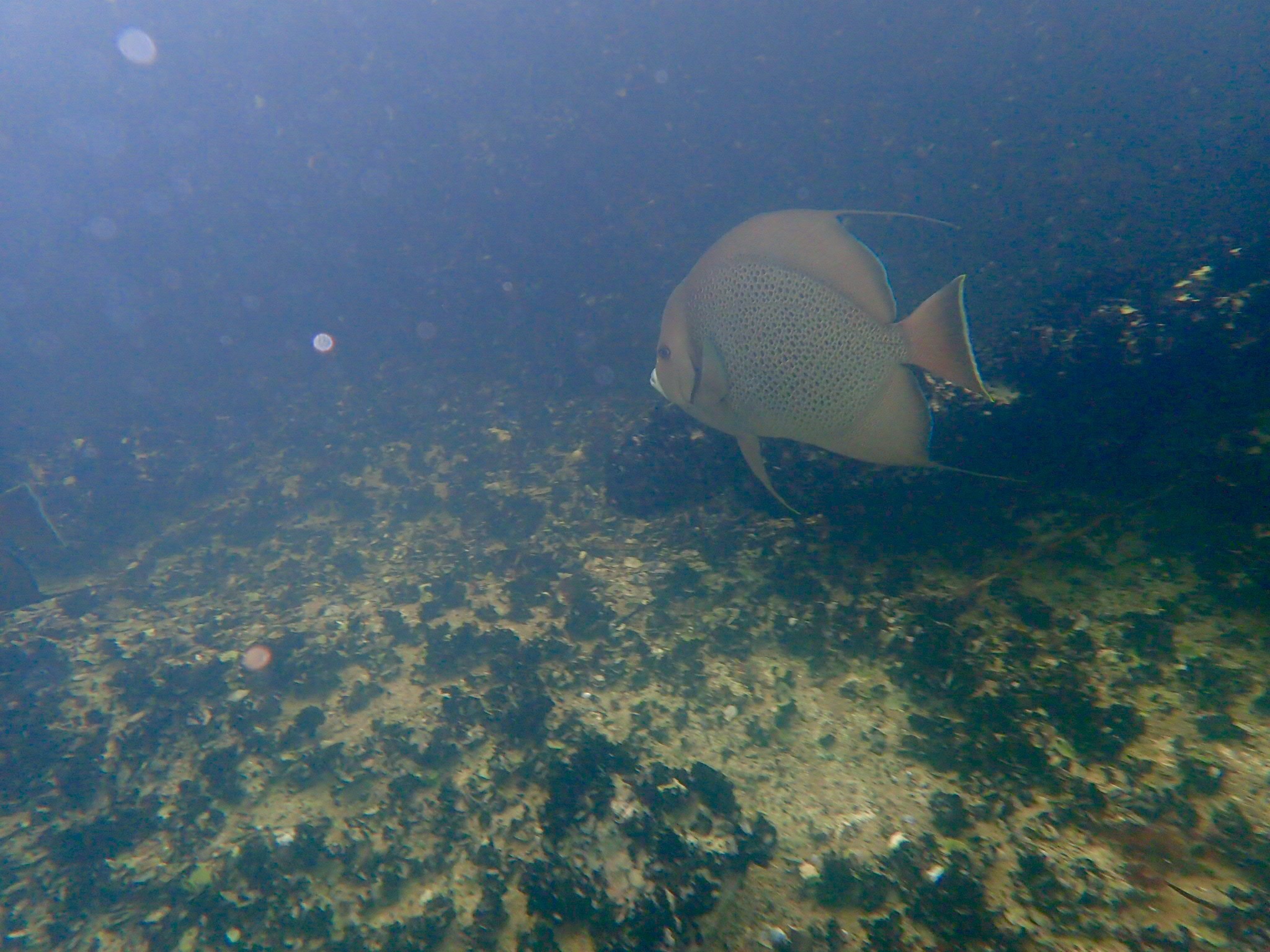 Grey Angelfish in the Ocean Hole 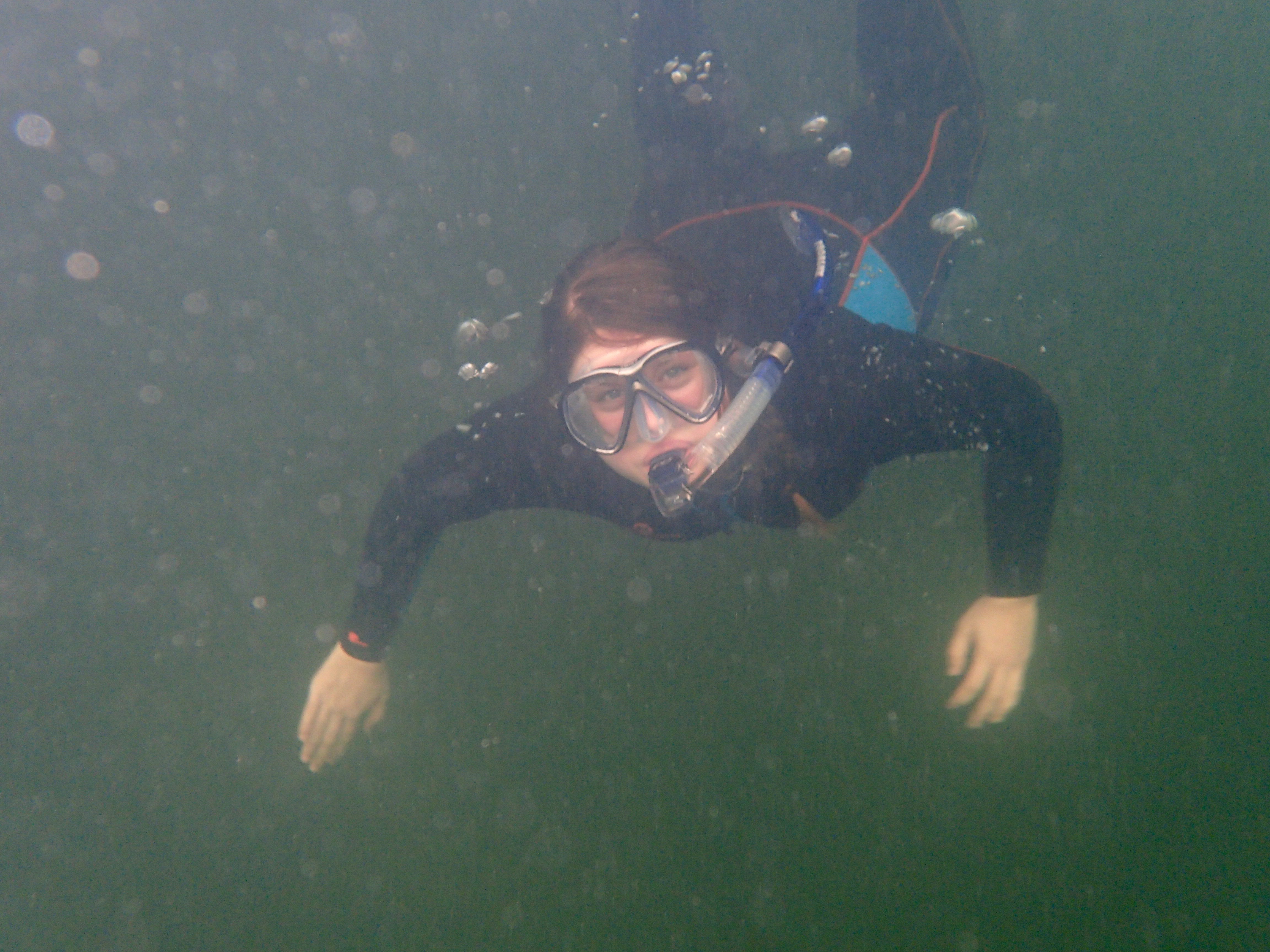 Me snorkelling in the Ocean Hole

Since we had a bit of time spare we cycled to the marina for sunset again. It was gorgeous, especially over Sunset Beach, which had lounge chairs perfectly situated for watching the sun drop below the horizon. That evening we watched a Jacques Cousteau movie, about the aquanauts experimental settlement. It was very interesting, but I was so incredibly tired that I don’t think I fully paid attention! It was quite nice to have the evenings spare though, since we’d managed to get the presentations out of the go in one hit! 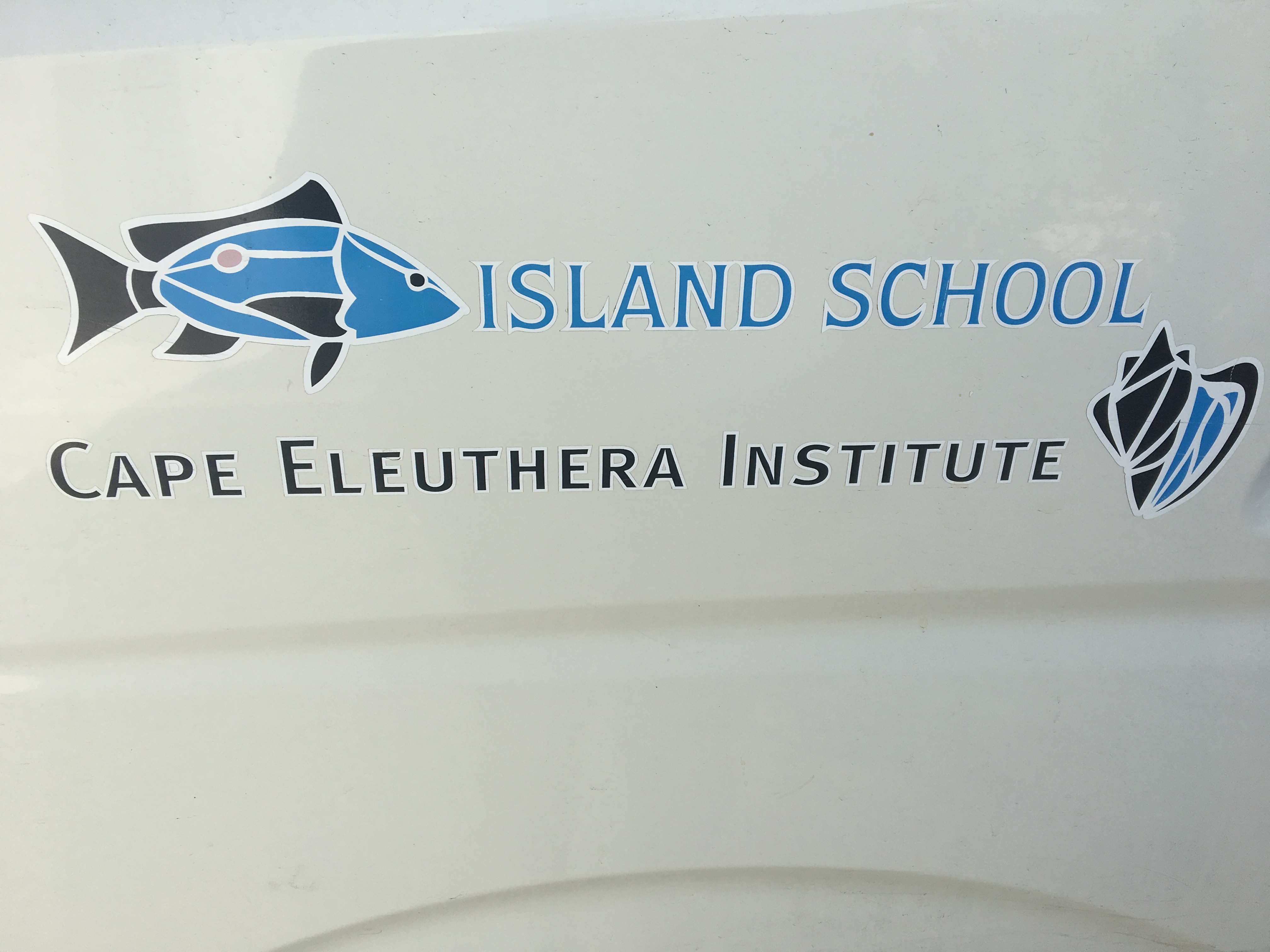